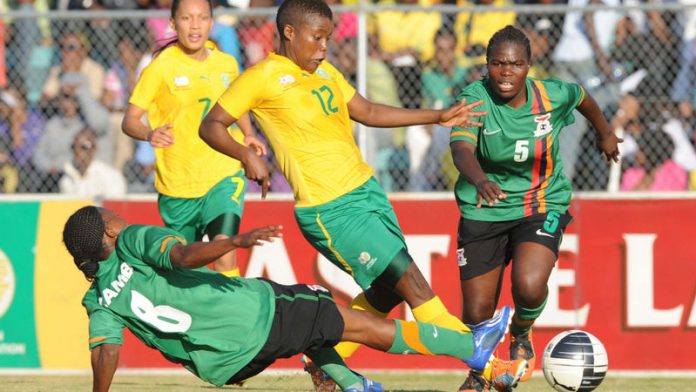 Portia Modise is South Africa’s most successful soccer player. She’s the most capped female player and the top goal scorer. Across the board. Okay, wait: I think if you tally up the amount of own goals Bafana Bafana have ever scored, it might top that number – but that doesn’t really count does it? Modise’s scored more than a 100 international goals – a record. Yesterday, the striker announced her retirement from Banyana Banyana with immediate effect to pursue a career in coaching.

Modise will probably not make the front page of any newspaper tomorrow, (although, I was very happy to see that she did trend on Twitter for the better part of the day). If she does, that will probably be a record itself. Her track record didn’t seem harness a lot of noise in the media. It should have. Our male team, the formidable Bafana Bafana’s failures see more coverage in the media than any success (and there are many) by their female counterparts.

Consolation prizes
Males in sport fill more pages than females. Don’t even get me started on their bank balances. Obviously the Bafana Bafana players get remunerated better. I can only guess why. Perhaps it’s because they’re so terrible they need a lot of consolation prizes to comfort them. I’m going to go with no one on that one and rather rest on the age old truth … it’s because they’re male. Gender inequality in sport, dare I say, is probably worse than it is in any corporate situation – not that that’s much better.

Banyana Banyana is an established team. Still, when it comes to sport, citizens are probably more likely to discuss Benni McCarthy’s latest weight issue than they are Portia’s 45 yard strike in the 2012 Olympics. I don’t think a Bafana Bafana player has been able to run close enough to a goal post, never mind score from that far away.

Perhaps the reason Banyana Banyana doesn’t enjoy the celebrity of our male team is because they’re marketing themselves all wrong.

Let’s see, they’re women right? So they would probably attract a bigger audience if they played right into the sexist, gender stereotyped roles that have been assigned to them – like good, genteel little ladies.

Sexist traditions are bollocks
Bet ya their popularity would be off the charts if they marketed themselves better toward the average 18 to 40-year-old male with a very sad and empty life. How? Skimpier clothes, of course. “We don’t want to see your skill for the sport, we want to objectify your bodies”.

Or perhaps what they’re doing wrong is that they are providing young girls and women with strong, positive role models. Honestly, there is nothing sexy about that.

Maybe, it’s because when it comes to women kicking and defending themselves, there’s already another contact sport out there that is so much better. In the current climate of the treatment and abuse of women, I would put good money on the fact that Youtube videos featuring this very type of thing probably get more hits than a televised women’s soccer match.

Traditionally, I’m not too far off the mark here. Traditionally, women’s soccer isn’t a thing. Sometimes, tradition is just balls.