Venice Biennale: View from the ground 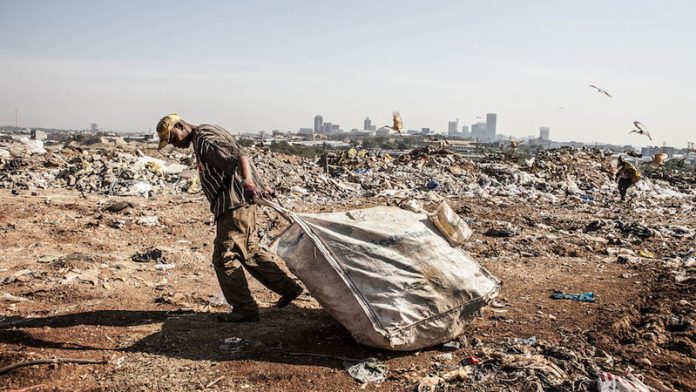 The South African Pavilion in Venice presents a mix of old and new works. There’s a video of Truth and Reconciliation Commission hearings and documentary footage from the Apartheid Museum – such as the sound recording of Nelson Mandela’s Rivonia trial speech, played over and over in a little booth – reminding us that the past is never far away.

But for me, the standout works all examined new themes and ways of looking at the country. Haroon Gunn-Salie’s new sculpture, Soft Vengeance, displays a cast of Jan van Riebeeck’s arms taken from his statue in Cape Town.

The violence of the work is startling. Red arms suggest blood spilled; his left hand is clenched in a fist. His right carries a stick. This work is of the moment, as debates around antiquated statues still bubble to the surface.

Sculpture ‘Soft Vengeance’, 2015, produced specially by Haroon Gunn-Salie @gunn_salie for the biennale in ‘What Remains is Tomorrow’, the South African Pavilion @sa_pavilion It takes inspiration in the removal of a statue of British colonialist Cecil John Rhodes from the campus of the University of Cape Town (April 2015). The sculpture presents the hands of Jan Van Riebeek, cast from a statue of the Dutch colonist in Cape Town

Extraordinary photographs by Mark Lewis from his Wake up, This is Joburg series examine contemporary issues. Taken for booklets produced with writer Tanya Zack, they’re “little narratives just about Johannesburg lives”, he says. His images capture people on the margins, making a living.

Recyclers walk through the city, their semiprecious cargo laden on to trolleys. Illegal miners pan for gold using mercury, or emerge from dangerous disused pits in the veld a few clicks from the CBD. There are taxi ranks in the inner city and informal butchers chopping up cow heads on streets nearby.

Gerald Machona’s Ndiri Afronaut comprises a spacesuit made from disused Zimbabwean banknotes. Representing hyperinflation and economic migrants from Africa, the work was inspired by the 2008 xenophobic attacks and Christina de Middel’s Afronauts.

A Zimbabwean national, he has relocated to Zimbabwe because of visa problems, although he is about to register for postdoctoral studies at the University of Cape Town. “I’m in this weird space where I’m still waiting on my study permit to come and I’m being asked to represent South Africa in the national pavilion … for me, that was an irony,” he said.

Nandipha Mntambo‘s The Beginning of Forever is more difficult to pin down. She has moulded two cowhides using taxidermy to resemble the outlines of women’s bodies.

She speaks of “a fascination with hair or hairlessness” she experienced as a teenager. “This idea that it makes one more attractive if you don’t have body hair.” The work is a play on this and imagining what a hairy female form might look like.

“I’m interested in the blurring of the animal and the human. The fact that every civilisation in the world has some kind of connection to the cow – whether it’s eating it, wearing it, having it as currency.

Nandipha Mntambo’s ‘Conversation: The Beginning of Forever’ Sculpture with cowhide, resin and polyester mesh in the South Africa pavilion.

“And within these different histories there have been these myths of animals merging with human beings, or this interchangeable life of one day being able to be an animal, the next being a human,” she says.

There has been some discussion around the fact that she is the only black woman in the South African Pavilion. “One would hope that my artwork helps people to think beyond that,” she says, adding that “it is a bit of a problem if you’re the only [black] female in a show”.

​Gunn-Salie sculpts the presence of the past

The artist's work allows us to reflect on the different architectures of dominance linked to entrenched powers of colonialism, racism and capitalism.
Read more
National