Rhinos may be biggest losers in trade debate 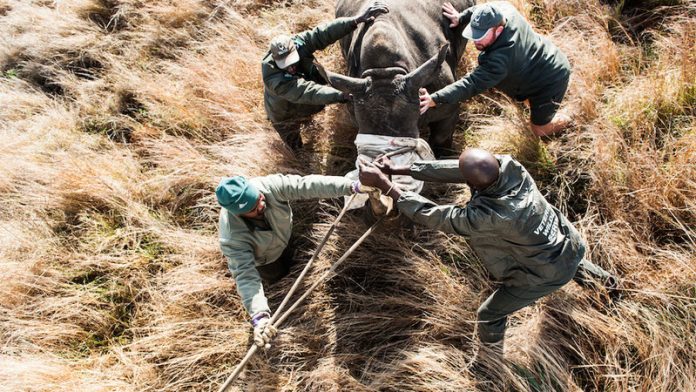 I am in South Africa for a debate on the proposed opening of rhino horn trade in the country, as part of the Wildlife in Crisis conference at the University of Cape Town.

Conservationists argue that rhinos are far too endangered to be considered for any form of commercial trade. In his presentation, retired major general Johan Jooste, who is in charge of law enforcement at South African National Parks (SanParks), confirmed our worst fears. Rhino poaching increased by 5 000% between 2007 and 2013. SanParks has responded with a military approach.

Yet, echoing the perspectives of many, Jooste admits the rhino poaching crisis cannot be resolved with militarisation alone. “We need to go revolutionary with our communities,” Jooste says. “We must stop talking about it and start taking action.”

The poaching crisis in Kruger escalated rapidly because the authorities woke up too late to the threat to rhinos caused by an escalating demand for rhino horn in Vietnam and China. Today, according to Jooste, the Kruger Park has three incursions daily: 12 poaching gangs operate inside the park at any one time. In 2014, 174 poachers were arrested in the park. Jooste concludes that you cannot protect the rhinos from within the park – you have to protect them from the outside.

Perhaps it’s the desire for profits that inspired rhino-breeders, who want to sell horns, to ally themselves with hunters and to lobby together for the opening up of international trade in rhino horn. For years, a few speculators, no more than 15 individuals, have been collecting horns and rhinos for future trading. The leader was John Hume, owner of more than 1 000 rhino. His rhino horn stocks are worth nothing today because trade in it is illegal, but should the trade be opened, his stocks would be worth about R3-billion.

Hume and the lobby for rhino horn trade argue that there would be three benefits from dumping a lot of rhino horn on to the Vietnamese and Chinese markets. First, a huge influx of supply would depress prices and reduce the incentive for poachers. Second, the legal market would outcompete the illegal market and will bankrupt criminal cartels. Third, the funds from horn sales could be ploughed back into rhino conservation, resulting in greater numbers of rhinos and more horn produced sustainably to satisfy the demand in Asia.

Conservationists argue that the science and economics are complete nonsense and similar arguments have failed time and again in the trade of other species, including ivory, fish and reptiles. They urge nations of the world to uphold the precautionary principle, the basic underpinning of the Convention in International Trade of Endangered Species (Cites), which says if an action or policy has a suspected risk of harming a species, the burden of proof that the action is not harmful falls on those taking the action.

Despite all the evidence, the South African government seems to be leaning towards supporting the pro-trade lobby. That would go against, for one, the British initiative to address international wildlife crime.

Two things could happen at the Cites Conference of the Parties in September 2016 in Cape Town. Either Africa will stand in solidarity with South Africa, the host, and give the West the finger by voting “yes” to rhino horn trade. Asian, Latin American and island states may be swayed by a strong African wish. Or the world will uphold the ban on trade in rhino horn on the basis of data, or because we don’t know what the effect might be and cannot afford to experiment and fail.

If this happens, South Africa may face one of the most spectacular host-country defeats in the history of Cites. It would be humiliating for the government if it really comes out as a supporter of horn trade and then loses the battle. It could be a blow to the pride of South Africans who are celebrating their country’s hosting such an important meeting at a time of unprecedented need.

Yet South Africa could create a different headline – one of hope, genuine co-operation and compassion – by withdrawing all discussion of rhino trade and elephant trade.

Instead, South Africa has a “sustainable use” policy, which translates practically into “use it or lose it” – the famous mantra of Robert Mugabe. I have been both amused and disgusted by members of the South African hunting and pro-trade lobby who cite Kenya as an example of failed conservation. They say it is proof that unless individuals own wildlife they will not protect it. Two minutes with someone can correct this misguided view, but it will not change their narrative.

These people must find evidence to support their position on rhino hunting and ivory trade as a solution for conservation. Ironically, their latest spin is to enlist the communities adjacent to parks into rhino breeding as proof that they are doing something to create value for these impoverished people.

Black South Africans were removed by force from their land and paid no compensation to create these parks, which became “whites-only” places for nearly three generations.

In his presentation, Moshakge Molokwane of People and Parks reminds us: “The whites, enriched on the land of blacks, promoted sport hunting, and the killing of our precious wildlife for the sake of wealth and status. Africans kill wildlife out of poverty and defiance; whites kill wildlife for amusement.” But then he went on to say: “If we don’t allow rich hunters to kill wildlife legally, they will do it illegally anyway, so we might as well sell them permits.”

I am proud to be part of such an important debate, but cannot help observing that the hall is half-empty (I estimate fewer than 180 people are present), and the audience is overwhelmingly white (fewer than 10% of the audience is black or coloured). In the programme of 16 speakers, three are people of colour, one is a black South African.

When I point this out, everyone agrees that the limited black representation in conservation is a major problem and that something must be done. But, when I ask during question time for one solution from each of the panellists, I am met with embarrassed silence.

If the park authorities and conservation groups in South Africa cannot think of ways to enlist the support of black South Africans, it is no wonder then that, despite the horrific, brutal past, the hunting fraternity is making rapid headway in positioning itself as the “saviour” of poor South African communities.

We are so lucky in Kenya that our history took a different trajectory and that African empowerment can be seen in all sectors. We have inspiring environmental and wildlife role models such as Wangari Maathai, Richard Leakey, Nehemiah Rotich, Winnie Kiiru, Patrick Omondi, Benson Okita, Martin Mulama, Perez Olindo, Isaac Kalua and teen wonder Richard Turere.

Talking to Molokwane about the lack of competence in the communities alongside parks was heartbreaking. If the hunting fraternity in South Africa can reinvent itself, then so can conservationists.

I am convinced Kenya can play a key role in catalysing a transformation with these communities and black people in general in South Africa by generously sharing our knowledge, love and passion for wildlife through exchange visits, courses and joint projects.

Paula Kahumbu is the chief executive officer of WildlifeDirect and a leader of Kenya’s successful “Hands off our elephants” campaign. In 2015 she received Kenya’s Order of the Grand Warrior