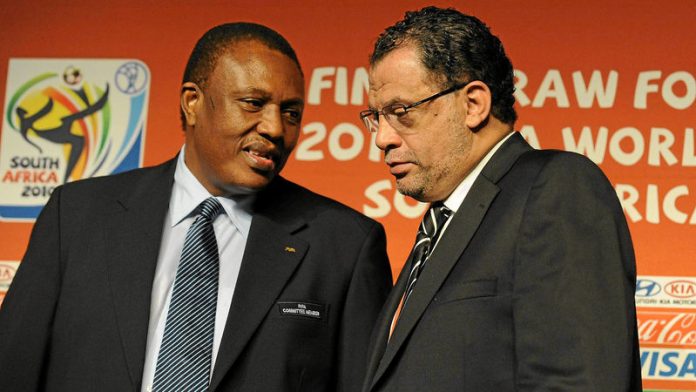 South Africa and its football officials stand accused of buying the vote that landed the country the 2010 Fifa World Cup. Now all eyes are on Danny Jordaan, who led the bid and hopes to be elected mayor of Nelson Mandela Bay on Thursday.

The indictment was unsealed after Swiss police dramatically arrested seven Fifa officials who had gathered in Zurich for the world football governing body’s elective congress, due to start on Friday. The arrests were at the behest of the US authorities, but in apparent investigations of their own, Swiss authorities raided Fifa offices.

Altogether nine Fifa or Fifa member organisation officials and five company executives are indicted by the US. Another four individuals and two sports companies have already been convicted quietly, after plea bargains.

Where this leaves Jordaan is unclear. As head of the South African Football Association, he was reportedly due to fly to Zurich on Thursday to attend the congress – the same day he could be elected as mayor of Nelson Mandela Bay – should the ANC succeed in mustering its small majority in the metro.

“The Criminal Schemes”
The indictment alleges widespread bribery between officials of Fifa, of its member football associations, sports marketing companies and others.

Under the heading “The Criminal Schemes”, it sets out how South Africa allegedly bought three crucial votes by agreeing to pay $10-million (R120-million now). South Africa won against Morocco by 14 votes to 10.

The committees included Jordaan as chief executive and Orlando Pirates boss Irvin Khoza as chair. There were other “high-ranking officials” on the committees too. Khoza could not be reached for comment.

The indictment alleges two separate instances of South African bribery – both with Jack Warner, the controversial then Fifa vice-president from Trinidad and Tobago, as a counterparty. Warner is among the nine indicted officials. His sons Darryll and Daryan are among those already quietly convicted.

Warner famously got Nelson Mandela to visit his home country, where he ran for political office, in the run-up to Fifa’s May 2004 vote to determine the 2010 World Cup host.

“$10 000 stacks“
In the first, undated instance, the indictment alleges that Warner sent a relative to Paris to “accept a briefcase containing bundles of US currency in $10 000 stacks in a hotel room from co-conspirator #15”, the South African bid official. The alleged purpose of the payment is not stated.

The second instance has more detail. The indictment alleges that in the months before the May 2004 vote, Warner and “co-conspirator #1” flew to Morocco, where Warner allegedly accepted a $1-million offer to vote for that country.

From the context it is clear that co-conspirator #1 was Chuck Blazer, the longtime Fifa executive member and general secretary of CONCACAF, the North and Central American and Caribbean football confederation. Blazer, like Warner’s sons, was convicted after reaching an earlier plea bargain. He subsequently co-operated with the US investigation.

The indictment alleges that after the Moroccan bribe offer, Blazer learnt of a change of plan. “High-ranking officials of Fifa, the South African government, and the South African bid committee, including co-conspirator #16, were prepared to arrange for the government of South Africa to pay $10-million to the Caribbean Football Union (CFU) to ‘support the African diaspora’.”

The CFU is where Warner held sway.

Blazer “understood the offer to be in exchange for the agreement” that he, Warner and an unnamed senior South American football official on the Fifa executive would vote for South Africa.

Although the payment was to be to the CFU in name, Warner and his associates were the intended recipients. According to the indictment, “Warner indicated that he had accepted the offer and told [Blazer] that he would give a $1-million portion of the $10-million payment to [Blazer].”

All three allegedly voted for South Africa. Afterwards, Blazer “periodically asked Warner” about the payment. Blazer then learnt that “the South Africans were unable to arrange for the payment to be made directly from government funds”.

The Fifa “laundry“
The indictment then describes a classic money laundering exercise: “Arrangements were thereafter made with Fifa officials to instead have the $10-million sent from Fifa – using funds that would otherwise have gone from Fifa to South Africa to support the World Cup – to CFU”.

The indictment details how three tranches totalling $10-million were transferred from Fifa to CFU and CONCACAF accounts controlled by Warner in early 2008. Warner allegedly diverted “a substantial portion of the funds” to his personal use.

Warner allegedly then paid three amounts totalling about $750 000 to Blazer “in partial payment of the $1-million” he had promised him.

Significantly, the indictment gives details of the Fifa and onwards transfers, suggesting bank records will be among the evidence presented. The account is also corroborated by the separate charge sheet to which Blazer pleaded guilty.

The South African Football Association spokesperson Dominic Chimhavi was quoted on CNN on Wednesday as denying bribery. “Those individuals that brought the World Cup to South Africa were men of high integrity. Men like the late President Nelson Mandela and our former President Thabo Mbeki. The bidding process was never compromised.”