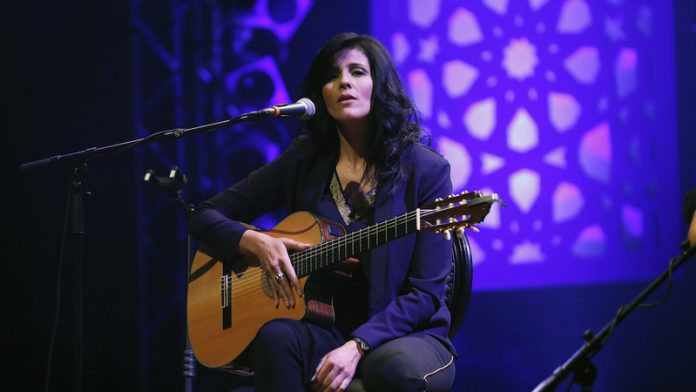 The most successful female singer-songwriter in the Arabic-speaking world is talking about history, sadness and her bravely adventurous new album, El Mutakallimûn, which means “Masters of the Word”.  “Yes, of course it’s political,” says Souad Massi. “I believe in people who are fighting for freedom, and I try to give them some hope with my music. It’s my responsibility and my role.”

These are bleak, difficult days for many in North Africa and the Middle East. But Souad, who moved from Algeria to France 16 years ago, after receiving anonymous death threats, has refused to take the easy way out. She has always insisted on performing mostly in Arabic, but became massively popular in the West thanks to her charmingly sad-edged vocals and the ability to write melodic, easy-going, Western-influenced songs that brought comparisons with Joan Baez and Françoise Hardy.

She could have continued to concentrate on love songs and tristesse, but she has chosen to be far braver. She has responded to the Islamic State’s rise with an album reminding of the creativity and tolerance of early Muslim civilisations, with echoes of the idealism and anger that fuelled the Arab Spring of 2010-11. She first had the idea for the project when she began to study the history of the Spanish city of Córdoba while working with a new band, Choeurs de Cordoue.

Here was a city that in the ninth and 10th centuries was run by Muslim leaders celebrated for their tolerance and invention. It was, she says, a city “where Arabs, Jews and Christians all lived together; there was beautiful architecture and a library with half a million books”. She started by studying Andalusian poetry, but decided to record an album reworking a wider selection of classic Arabic poetry.

‘Arab culture is being darkened‘
“At the moment, Arab culture is being darkened because of Isis, when it is actually a culture of light,” she says. “Isis has no relationship to the Islam I know, and they are trying to destroy Muslims.” El Mutakallimún took two and a half years to make, as she wanted her musical treatment of the poems to be matched by elaborate new calligraphy.

Her melodies are as accessible as ever, and the poems (all in Arabic, but with translations) range from work by sixth-century poet Zuhayr bin Abi-Sulma, who lived before the coming of Islam, to contemporary material. Some poems were suggested to Massi by her followers, including her 300 000 friends on Facebook.

Their recommendations included The Visit and Freedom, two angry and highly political pieces by Ahmed Matar, who was born in Iraq, moved to Kuwait but now lives in exile in London. Then there is A Message to the Tyrants of the World by the Tunisian poet Abou El Kacem Chebbi, who died in 1934 and whose verses form the basis of the Tunisian national anthem.

This piece, often declaimed at protest marches during the Arab Spring, contains the line: “Beware that the springtime doesn’t trick you.” “I chose it because of that,” Massi says. “It’s a premonition of what would happen.” Why has the Arab spring gone wrong? “I always dreamed of democracy in the Arab world and Africa … but certain … powers didn’t want people living in freedom.”

Boosted stardom
Her stance has brought her a growing following across the Arab world, particularly in Egypt. It’s a difficult market for a female singer, especially as she never wears a veil. “If you want to make it big in the Arab world, you have to make it in Egypt,” she says. “

I have a student fanbase there, and for many it’s the first time they have seen a woman playing modern music.” Her following in Egypt was boosted by her appearance last year in Eyes  of a Thief, a film in which she co-starred with Egyptian heartthrob Khaled Abol Naga. Filmed on the West Bank by Palestinian director Najwa Najjar, it’s “a love story about a father looking for his daughter, but behind it you see the suffering of the Palestinians”.

It wasn’t an easy shoot. “I was held [by the Israelis] for six hours getting in; [while] … at the hotel I could hear shooting and helicopters going over. I accepted the role to give support for the Palestinians. I found how hard it was for them; they gave me courage.” Massi’s career has long been affected by political upheaval.

She is a Berber, a descendant of those who lived in North Africa before the arrival of Islam, and was brought up in Algiers, where her father was an accountant. She studied town planning, poetry and classical music, learned to play guitar, and at night played rock in a garage band.

‘I was not aware of the dangers.‘
This was a time of civil war, following the cancellation of the 1992 elections, in which it seemed the Islamic Salvation Front might win. The fundamentalists didn’t approve of pop music, let alone female singers.

“I was part of the people who just continued their lives, playing music,” she says, “but looking back I was not aware of the dangers. It was very dangerous, more than I realised. I had threats on the telephone and was afraid.” She moved to the Berber area of Kabylie, and in 1999 was invited to perform in France. She has lived there ever since, though now returns regularly to Algeria.

“I was suffering from terrorism in my own country,” she says. “But I moved to France, and then [after the Charlie Hebdo attacks] my own community was being attacked as terrorists. It was an unjust situation.” So why was there support for the Islamic State among some Muslim youth in France? “For certain well-educated people, it’s ideological, but then there are the lost generation of kids who are outside society and easy prey for the sects. And some French politicians have encouraged the situation.” So what’s next for her?

There’s a possible album with Choeurs de Cordoue, though that is apparently proving hard to organise. And then there’s an equally intriguing project in which she plans to rework Berber music from across North Africa. It’s a welcome comeback for a woman who has not recorded for five years, and has spent much of her time looking after her two young daughters.

When I met Massi early in her career, she complained that she was “not happy”. Given what has happened in North Africa and across the Middle East, has she been able to change that? “I am happy, but still melancholy. I can’t ignore everything that is going on in the world.” —  © Guardian News & Media, 2015 “Arab culture is being darkened because of Isis, when it is actually a culture of light”