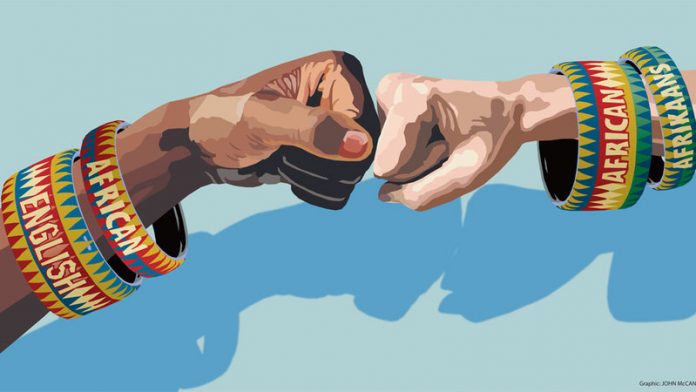 Politics is the art of compromise. For moral purists, this represents a cynical assessment of the unprincipled compromises that politicians are perceived to make.

In the real world, tensions between competing or apparently irreconcilable views that cannot be resolved by argument alone require sufficient agreement as a way to move forward. Court judgments cannot resolve the underlying conflicting beliefs and assumptions that have led to the dispute. The determination of winners and losers exacerbates divisions.

The current dispute about the imposition of English as a parallel medium of instruction in Afrikaans-medium schools in Gauteng is an instance of competing views, each passionately held and each with its own logic.

On May 14, the Gauteng department of education announced that high-quality education infrastructure in the province is under­used because demographic profiles have changed, and single-medium schools would be converted to parallel-medium schools to achieve maximum use of all available educational space.

The MEC said consultations would commence with the affected 124 schools.

But before that could begin, and because of a leaked list of the affected schools, the Federation of Governing Bodies of South African Schools (Fedsas) brought an urgent application challenging the decision. On May 27, the Johannesburg high court ruled in favour of Fedsas.

Tatters
Public engagement has been adversarial, and the consultations, which were to address potential fears and challenges, were in tatters before they began.

Wise leadership is needed to find a way to bridge the competing views and overcome the combative postures to advance the common good.

The issue of medium of instruction is complex. The Constitution is clear that everyone has the right to receive education in an official language of choice. This expresses the educational imperative for child­ren to learn in a language in which they have full fluency and the constitutional right of participation in the linguistic and cultural life of choice.

The administration of the public education system must give reasonable expression to this in a way that is equitable and practical. Our current reality is that, from grade four, although fewer than 10% of children use English as their home language, more than 80% are taught in English.

In linguistically complex urban townships, many children in grades one to three are learning in an African language that is not their first language. This has enormous educational disadvantages.

It also contributes to a frustration that African languages have not yet been accorded the parity of esteem and educational status intended in the Constitution, and that the historically privileged continue to learn in their own languages, with the positive educational consequences that brings.

Desegregating
The overwhelming choice of English as the medium of instruction by African pupils has had a major effect on the racial desegregation of what were historically white schools.

With very few African pupils choosing to study in Afrikaans, schools historically serving white Afrikaans-speaking pupils have been slower to desegregate than English-medium white schools, creating an impression of islands of white privilege, and a perception that language exclusion operates as a proxy for racial exclusion.

Not only is the danger one of perceived exclusion, but also of real isolation from the rich social diversity of the country, and an impoverished preparation for participation in an inclusive society.

It is this perception of exclusion and isolation that is at the heart of the conflict. For a productive conversation to be possible between the protagonists, one side needs not only to acknowledge but also to empathise with the perceptions of exclusion and isolation sufficiently to contribute to a solution. And the other side must be unequivocal in affirming language rights and identity and education practicability, and defend the place for Afrikaans-medium instruction within the public education system.

From 1994, many historically Afrikaans schools have opted to offer parallel streams of English and Afrikaans in one school.

But the educational management of a parallel-medium school is complex, especially at high school level because of the complexities of curriculum choice. For parallel-medium schools to be practical, the numbers of pupils in each stream must be large enough to qualify for sufficient teachers.

The Ermelo case
In 2007, the Mpumalanga education department instructed an Afrikaans-medium school in Ermelo to admit 113 pupils who could not be accommodated elsewhere and who wished to be taught in English.

The instruction was challenged and the courts required rigorous evidence that this was a reasonable educational decision. The Constitutional Court required the department to quantify demand for English medium in the educational circuit, as well as to outline the administrative action taken to satisfy this demand.

The lesson was clear: language policy cannot be used unreasonably to exclude anyone, but any administrative decision to overrule a school’s language policy is subject to review and, therefore, needs to be reasonable and well motivated in every case.

Reasonableness is used twice in the language of instruction clause in the Constitution. This is a clear marker that our courts will adjudicate according to the evidence, and the actions of the state will be scrutinised for reasonableness.

At the same time, the Constitution is explicit that school language policy must take into account the need to redress the results of past racial discrimination. The constitutional principles of equity, practicability and historical redress can be used to justify a state decision to overrule the language policy determined by a school governing body if the educational circumstances reasonably require this.

The tension that must be resolved politically by debate and discussion is between the legitimate right to a preferred medium of instruction, and the perceptions of a language policy operating in practice to discriminate racially.

This is a matter of enormous importance. It is a significant moment for asserting that we all belong, that our futures are intertwined, that our fervently held language and cultural identity cannot be compromised, but that additional actions must be taken to give visible expression to our desire to be one with those of different identities – that, although we may learn in a language-circumscribed space, we must actively embrace and celebrate diversity in other spaces.

A legal war of attrition will not yield this solution.

It must be won through lively and frank discussion and a mutual determination to find a solution that communicates belonging, that builds participation in the broader national project and is rooted in a commitment to the shared values and common goals that gave birth to the new society that we are still building.