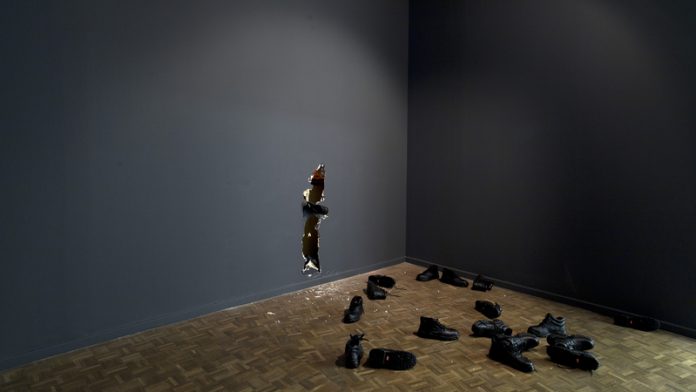 Karl Marx’s critique of religious ideology contains an injunction against the exploitation of labour in the workplace.

In essence, work for wages isn’t just a way to survive and a sanctuary; it acquires a theological justification of sorts as an ethical imperative. To be of this world, we must work. In fact, this injunction finds its truest expression in popular culture. The satisfaction attributed to hard work, and thus the valorisation of a hedonistic life, pervades, pleasures and disorganises society. It reifies the status quo and insulates it from critical scrutiny.

The show is composed of photographs, texts, videos and installations. It builds on Gush’s previous show, Work (2013). For Gush, the idea of the workplace isn’t just the factory or the office, where productivity takes place. The idea of work is an ethical call that reproduces itself in everyday life.

The illusion of free and spare time
To show its pervasiveness, Gush picks out moments regarded as qualitatively different from work – weekends and holidays, when production seems to be halted for the moment.

When you enter the gallery, you are greeted by an inscription that might be culled from Theodor Adorno’s oeuvre: Leisure Time, Free Time, Spare Time, Time Off, Time Out. There is something deeply religious about notions such as free and spare time; they suggest freedom from work, whereas, as Adorno says, they are very much ensnared with and regulated by it.

In a series of black-and-white photographs titled The Yellow Jersey, Gush travels through parts of Maputo, tracing the histories, flows and regulation of labour to and from South Africa. These are pictures of ordinary apartments, landscapes, beachfronts and factories. But they are punctuated by texts that read as notes, pinches of historical information, poetic abstractions and descriptions.

The photographs have a captivating, aesthetic charm, and tend to subvert the possibility of being simply visual references of the texts. Rendered with impeccable detail, tinges of illuminating light and subtle textures that resemble the quiet feel of a sketching pencil, they contain an ironic twist in their reference to the labour that went into making them. But trying to stitch sense into the disjunction between text and image seems fruitless.

Opium of the people
As a project that speaks about work, Workplace does not rely on the sad-ending tales of toyi-toyis, strikes, marches and boycotts. Workplace struggles with the meaning of work as a social abstraction, as the first punishment of “man” after the biblical fall from grace, and suggests that it is the basis on which capitalism was established and perpetuated. The real opium of the people?

Gush’s problem appears clearly in the two videos on the exhibition. In Lazy Nigel, Gush takes us through Nigel on the East Rand, one of the old mining towns. Again moving between text and image, and now sound too, in Lazy Nigel, he saunters through the streets of a sleeping town, after hours and on weekends when the noise of the machines is silent. For a while, inactivity and silence arrest the town; later we see ordinary people having fun at a circus or doing their trivial hobbies.

In the second video, Calvin and Holiday, Gush scuffles through Geneva in search of the 16th-century theologian Jean Calvin, to whom the Calvinist imposition of the work ethic is attributed. The camera takes us through the city and the visuals shift between the artist’s thoughts, notes and sounds, and the images of the cityscape. Gush is interested in how the Calvinist project has become the regulating ethic that spans both Europe and Africa, preaching work as an edifying ideal.

Images with an arbitrary feel
The videos are a meeting point between creative writing, video art and critical theory. The critique of work is evident in the occasionally intersecting texts, but the accompanying images retain an arbitrary feel. Without the text, they lack rigour; they make you wonder why the artist didn’t just write an essay on the subject.

The parallels between Africa and Europe are consistent with Gush’s general schema of disjunction. By trying to show how the Calvinist work ethic has stretched across different worlds, Gush’s project threatens to flatten different histories for the sake of showing commonality. His use of the category “work” is generalised and often too plastic. He spends time thinking of work beyond the factory floor and the office, but is mute on how domestic work, work within the household, precedes wage labour but remains silenced and normalised.

That said, Gush’s exhibition is inviting and engaging, a feast of aesthetic and critical pleasure.

Workplace runs at Stevenson until June 12