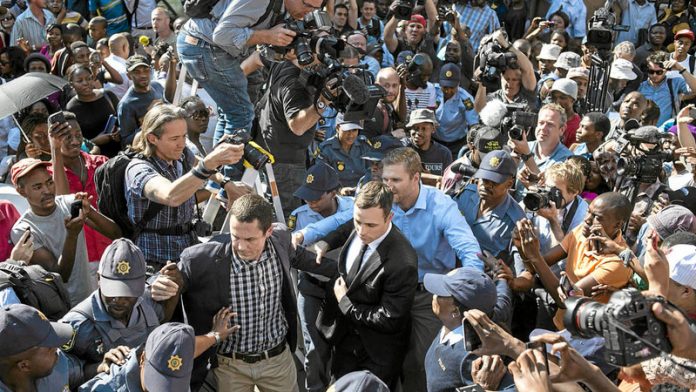 Pistorius, jailed for five years last October for culpable homicide will be eligible for release to house arrest having served a sixth of his sentence and shown good behaviour.

But the parole board at his prison overruled an emotional plea from the 29-year-old victim’s parents when it sat last week. In their submission, Barry and June Steenkamp said: “We have forgiven Mr Pistorius even though he took the life of our precious daughter, Reeva. Our lives will never be the same as we live with the sadness of her death every day.

“Reeva had so much to offer this world and we were all robbed of her life when she was killed. As her family, we do not seek to avenge her death and we do not want Mr Pistorius to suffer; that will not bring her back to us. However, a person found guilty of a crime must be held accountable for their actions.”

The Steenkamps added: “Statistics show that our society is under continuous attack from criminals and murderers. Incarceration of 10 months for taking a life is simply not enough. We fear that this will not send out the proper message and serve as the deterrent it should.”

Pistorius, now 28, became a global sports star known as the “Blade Runner” after competing in the Paralympics and Olympics on prosthetic limbs. He killed Steenkamp, a model and law graduate, by shooting four times through a locked toilet door at his home in Pretoria on Valentine’s Day 2013. In a trial that gripped millions , the court accepted his explanation that he had mistaken her for a burglar and therefore did not convict him of murder.

Due to his physical disability, Pistorius has been held since October 21 in the hospital ward of Kgosi Mampuru II prison in Pretoria. On Monday the Department of Correctional Services said the prison’s parole board had met last week “and approved the placement of Oscar Pistorius under correctional supervision with effect from August 21 2015”.

This is in line with legislation stating that “an offender may serve only one sixth of his/her sentence in custody, and continue to serve the remaining period of the sentence under correctional supervision,” it added. “The family of the victim was invited and participated in the deliberations” of the parole board.

Legal experts say the recommendation is highly unlikely to be opposed. It means that Pistorius will probably be switched to house arrest with one hour of free time each day, and gradually these conditions will be relaxed, for example allowing him to go to church but not socialise at night.

The Steenkamps declined to comment further on Monday but their lawyer, Tania Koen, said: “They are shocked by the fact that Oscar Pistorius will be receiving parole and going out on August 21. They don’t think 10 months is enough for taking a life. Whether it was Reeva behind the door or anybody else behind that door, it doesn’t send out a proper message and it doesn’t serve as a deterrent.”

June Steenkamp had been discharged from hospital on Sunday after a major operation, Koen added. “She’s not in a good place. She’s very fragile at the moment.”

The parole decision has been condemned by gender rights activists, who note that South Africa has one of the highest rates of intimate partner homicide in the world. In 2009 it was estimated that a woman was killed by her husband or boyfriend every eight hours – more commonly than by strangers.

Rachel Jewkes, director of gender and health research at the South African Medical Research Council , said: “It’s a complete travesty. It sends out a message that, with the right resources, you can kill a woman with impunity. It’s a setback for the campaign against gender violence in South Africa.

“There have been some very high profile cases recently serving to remind us what a terrific problem we have of men killing their nearest and dearest in this country.”

But Pistorius cannot take freedom for granted. It was also announced on Monday that an appeal against his culpable homicide conviction will be heard in November, when prosecutors will argue that judge Thokozile Masipa misinterpreted the law and should have found him guilty of murder. If the supreme court of appeal agrees, Pistorius would face the prospect of being sent back to prison for a minimum of 15 years.

“A specific date has not been set yet, but we can confirm that the appeal will happen in November this year,” a supreme court official, who declined to be named, told Agence France-Presse .

Anneliese Burgess, a spokesperson for the Pistorius family, said on Monday: “We note the statements made by Correctional Services as reported in the press today, but as the family, we will not be commenting on this matter.” – © Guardian News and Media 2015