War, a game for the whole family 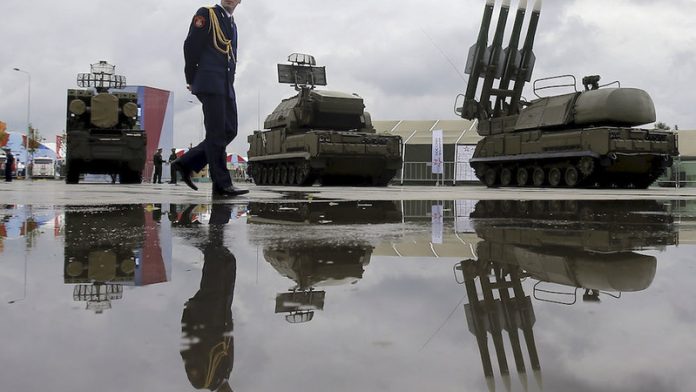 Lunch consists of army rations, shopping is mainly for Vladimir Putin accessories and, instead of riding rollercoasters, children can play with grenade launchers and clamber over heavy weaponry. Welcome to Patriot Park: fun for all the family, with a militaristic twist.

This vast military theme park at Kubinka, an hour’s drive outside Moscow, was officially opened by Putin on Tuesday at a time of heightened patriotism and military rhetoric in the wake of Russia’s annexation of Crimea last year and subsequent confrontation with the West.

The Russian president used the event as an opportunity to announce the addition this year of 40 new intercontinental missiles to Russia’s nuclear arsenal. Putin said the theme park would be “an important element in our system of military-patriotic work with young people”.

As well as being a military Disneyland, Patriot Park is a conference and exhibition venue, and Tuesday also marked the start of Army 2015, a Russian military exhibition showcasing the latest equipment, attended by delegations from dozens of countries.

Putin arrived at Kubinka by helicopter and spoke in front of a military choir and balalaika orchestra, who belted out a patriotic number. He said in a short speech that the Russian military was developing several new pieces of hardware that had “no equivalents in the world”, including the next-generation Armata tank, first displayed publicly during a military parade in Moscow last month.

He said the 40 new nuclear missiles that Russia’s strategic forces would receive this year were “capable of overcoming even the most technically advanced missile defence systems”.

Russia’s deputy defence minister, Anatoly Antonov, said at the conference that the West was “provoking an arms race” with Russia.

‘Proud of Russia’
Alexander Zaldostanov, better known as the Surgeon, leader of the pro-Putin biker group the Night Wolves, who was touring Patriot Park on its first day, said: “When I look at all this stuff, it makes me feel proud of Russia and realise that we have something to answer the Americans with. They wouldn’t dare to press the button.”

A pack of a dozen Night Wolves were visiting partly for inspiration for a similar patriotic park they are building on the outskirts of Sevastopol, in newly annexed Crimea.

“In Soviet times, the army was a distant, faraway thing, but now we all feel closer to the army. The army is being romanticised and I see that as a good thing,” Zaldostanov said. “If we don’t educate our own children then America will do it for us – like we have seen in Ukraine.”

When the Kubinka park is functioning at full capacity, it will be able to host tens of thousands of visitors a day. There will be battle reconstructions of some of the most famous victories in Russian and Soviet history, and regular displays of military hardware and training opportunities.

Hotels and entertainment centres will be opened on the grounds, which should allow families to visit for several days and make a holiday of it, according to promotional literature distributed at the launch. The park is due to be fully completed in 2017, and will cost the defence ministry 20-billion roubles (R4.5-million), according to the Kommersant newspaper. Visitors will be able to ride tanks, shoot guns and play extreme sports.

“I think this park is a gift to Russian citizens, who can now behold the full power of the Russian armed forces. Being here gives you a sense of internal self-sufficiency and makes you confident we can defend our territory,” said Sergei Privalov, a Russian Orthodox priest who attended the opening ceremony. “Children should come here, play with the weaponry and climb on the tanks and see all the most modern technology, which they would not have known about before.”

Rows of tanks, armoured personnel carriers and missile launching systems were on display in the grounds of the park, as well as period pieces. At the Army 2015 forum inside Patriot Park, dozens of huge marquees showcased everything from secure fingerprinting equipment to armoured riot control vehicles and police watchtowers.

A naval commander from Saudi Arabia was perusing firefighting equipment and said a delegation of about 20 had come from his country to “check out the latest offerings”. There were delegations from dozens of other mainly non-Western countries.

Putin has stressed that Russians should not dwell on the dark pages of the country’s history and instead focus on the military victories of both Tsarist Russia and the Soviet Union. The victory over Nazi Germany has been elevated to a national rallying idea, with huge celebrations last month to mark the 70th anniversary.

But there was no place at the forum for any mention of the Russian military’s latest tactics of “hybrid war”, the term used to refer to Russia’s intervention in east Ukraine using a mixture of mercenaries, subterfuge and intelligence work, augmented with regular military units during key moments. Officially, Moscow has denied any military involvement and has tried to cover up the deaths of serving soldiers in the conflict zone.

The emphasis at Patriot Park is on the glory of war, and the government believes the theme park should help instil a new sense of patriotism in Russia’s youth. At one stand, the computerised training system for various missile and rocket-propelled grenade launchers was being demonstrated. The systems are used to train the Russian army as well as foreign armies that buy Russian weapons.

The demonstrator, Vladimir Kryuchkov, said the training systems were on display only as part of the forum, but he hoped they would remain permanently for visitors to the park to use, and was especially keen that children receive training. “Boys are geared towards the army from birth by genetics,” he said.

Although the Igla surface-to-air missile launcher was probably too heavy for very small children, smaller rocket-propelled grenade launchers were perfect for children of all ages. Kryuchkov added: “All males of all ages are defenders of the motherland and they must be ready for war, whether war comes or not.” – © Guardian News & Media 2015