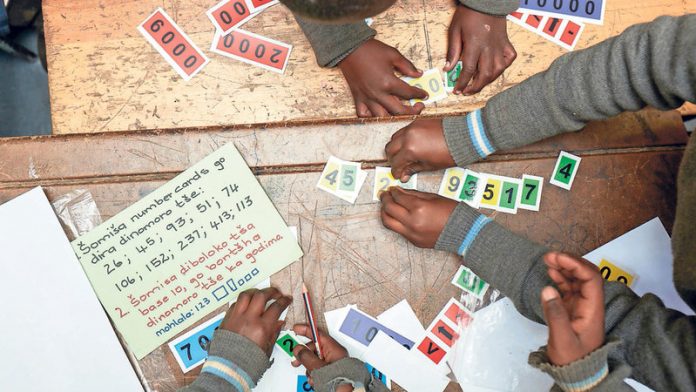 Democracy may have come of age this year, but an education crisis remains in the majority of South Africa’s schools – particularly when it comes to mathematics and science.

In fact, last year’s World Economic Forum survey put mathematics and science education in South Africa at the very bottom of the list – 148th out of 148.

So it is nothing short of remarkable when a pupil in a historically disadvantaged school in a rural Eastern Cape district achieves 96% for maths and 92% for science. This is what 18-year-old Mava Qolo did last year, becoming the top-achieving pupil in previously disadvantaged schools in the Cradock district. It is also remarkable that Cradock, out of 84 districts assessed for improvements in mathematics over the past four years, has been recognised as the third-best nationally and second-best for improvement in physical ­science over the same period.

Four years ago, an innovative, technology-linked offline teaching and learning model for maths and science, developed by the Govan Mbeki Mathematics Development Unit at the Nelson Mandela Metropolitan University, was first introduced in this district.

But before one looks at the model, and without a doubt at the role it has played in Qolo’s and Cradock’s success, it is important to examine the broader context of education in rural South Africa.

The first factor to take into consideration is the legacy of apartheid, when the government largely ignored schools for black pupils, particularly in rural areas. The second is that, although the post-1994 government has made attempts to put things right, some strategies seem to have had the opposite effect.

Big, bad decisions
Some of the macro strategies by leaders in education, including experimenting with outcomes-based education and the closure of all teacher training colleges, appear to have contributed to the further demise of mathematics and science education.

At the heart of the problem is the fact that there are huge deficits in school management and too few teachers of mathematics and science who meet the minimum standards. Many teachers are unqualified or underqualified, and little is being done to encourage and support them to improve their subject knowledge.

What is more, most teachers are teaching in the same way they have done for decades, using the old “sit, get and forget” model, and making no attempt to tune into the changing needs of today’s techno-savvy pupils, who need to become productive digital citizens in a socially connected 21st-century world.

It is the pupils who ultimately suffer. Many drop out of school before getting to matric, and our matric pass rates and standards are low.

Not nearly enough pupils qualify for science, engineering, technology and related courses at universities and colleges, and those who do are often not well equipped enough to cope with the demands of tertiary education.

This is the context that inspired the creation of the Govan Mbeki Mathematics Development Unit in 2002, and that has governed all its programmes ever since.

Leg up
For the past 13 years, the unit and, for the past five years, the FirstRand Foundation chair in mathematics education, both of which are based at the Nelson Mandela Metropolitan University, have been working on a teaching and learning model that gives pupils in the worst Eastern Cape schools a leg up – a chance at boosting their marks and qualifying for tertiary education.

The maths unit, which won a national Impumelelo Social Innovations Gold award in December 2013, has always focused on urgent short-term solutions to help pupils with potential, such as Qolo, who were caught in a vicious education spiral but who aspired to acquire a post-school qualification.

The model has evolved to the point where the entire curriculum for maths and science in grades 10, 11 and 12 – in the form of video-based lessons, animated PowerPoint presentations, calculators and exam revision videos, experiments, simulations and other visual and high-tech digital resources – is available offline on a tablet for pupils.

It is offline because most of the schools in the unit’s target areas have no access to the internet.

But, even where internet connections are available, several serious challenges stand in the way of quality learning. These include a lack of adequate security at schools and a lack of technology support for teachers, who also lack the skills to use web-based material. And, of course, load-shedding is a factor.

The maths unit’s offline model, with a tablet that can maintain its charge for several hours, overcomes these challenges.

In parallel, and through each stage of its development, the FirstRand chair has tested the model in 10 Port Elizabeth schools, constantly improving it, based on feedback and its success in practice.

Interaction
The central support package for the techno-blended model, called TouchTutor, also has interactive self-assessment and feedback, and a Mxit-based maths and science curriculum support system.

How it works is that pupils with potential (picked by the unit, in collaboration with the department of basic education) are introduced to the Android tablets by an incubator school programme run over 14 Saturdays, or an after-school tablet- assisted peer-support programme, run on school days.

In general, pupils who attend the incubator school programme or after-school tablet-assisted peer-support programme, and who receive the tablets, which are for use after school hours as personal tutors, improve their marks by at least 10%.

Qolo, who attended Matthew Goniwe High in Cradock, attended an incubator school programme. He said one of the main problems he experienced throughout his school career was that his teachers lacked sufficient knowledge of the subjects they were teaching. Armed with the tablet, he could fill in the gaps.

He is now studying mechatronics at the Nelson Mandela Metropolitan University.

TouchTutor is available on laptops for teachers for use as a classroom resource. There is also a desktop model for pupils. The unit and the FirstRand Foundation chair have placed desktop resource centres in more than 100 Eastern Cape schools over the past year.

In April, the unit received a letter from Edgar Klaasen, Cradock’s acting district director, informing it of the district’s impressive national achievements. It stated that the unit’s educator training and incubation school programme had “­contributed significantly to our mathematics and physical science grade 12 results over the past four years … These accolades would most definitely not have come our way without your intervention.”

Since 2010, the unit’s interventions have reached more than 2 000 selected pupils and more than 700 in-service teachers in the Eastern Cape and further afield. Scores of pupils have emerged from the incubator school programme with improved skills and have successfully progressed within study ­programmes at higher education institutions over the past five years.

This year, 750 grade 11 and 12 pupils from more than 80 mostly under-resourced Eastern Cape schools are busy completing one or other of the programmes. Qolo’s story, Cradock’s story, and other similar success stories linked to the development programme, are what the unit and the chair’s efforts are all about – to harness the potential of modern off-line technologies in an innovative way to ensure that pupils with potential progress, despite the sometimes overwhelming challenges that exist in schools.

In recent years, the department of education has chosen to work closely with both the unit and the chair to ensure that an accredited and more sustainable professional development ­programme for in-service mathematics teachers is ­implemented in the Eastern Cape.

As a result, the unit’s reach has been extended to 12 of the 23 districts of the Eastern Cape, and also to the Free State, and it is hoped that this model can be duplicated in other areas to empower as many teachers and pupils as possible.