Ditch ‘pay back the money’ and other grim fairy tales 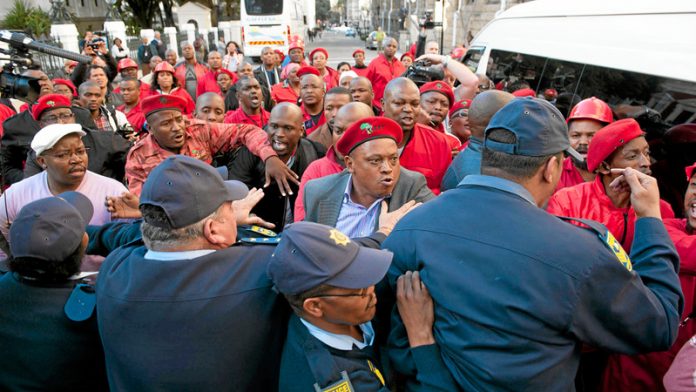 I don’t know about you, but I am starting to find the whole “pay back the money” debacle quite exhausting. It’s not that I want another corruption scandal to take its place. No one wishes for that. It’s just that perhaps even that would prove to be a refreshing departure from the parliamentary monotony that is the Nkandla refund.

I completely understand why its necessary for opposition parties to be tenacious about this subject. Although, let’s not kid ourselves, all politicians are tainted and they’re not entirely good Samaritans. Flaws are human, power corrupts and all that. Even Gandhi was said to be a sex addict.

More than looking out for the South African public though, what most parliamentary members (and the nation) wants, is some semblance of accountability. But maybe that’s a far-fetched idea.

History, Zuma’s history at least, has taught us that accountability is not in his DNA. Perhaps what is, is a single Greek chromosome because, instead of stepping up to the plate, he does love just breaking them.

Don’t eat that cake!
Maybe, instead of wishing for something that’s clearly never going to happen, and fuelling the bus so that the wheels can go round and round with what clearly seems like fairy dust, what needs to happen is that the wheels fall right off. Roll down the hill into that dark place in the Lion King where there are elephant bones and graveyards and stuff where Simba was warned to never go, but where Zuma clearly lives.

I know this seems like a defeatist attitude, but if we’re being honest with ourselves, the country is slightly defeated anyway, in more ways than Nkandla. I am tired of the whole positive attitude, proudly South African thing. No, I don’t hate my country, but let’s stop with the fiction of how fantastic it is to live here and stare the negative crap in the face. Let’s talk about it and actually make this the place it can be instead of decorating a flopped cake with whipped cream that just goes off because there isn’t a fridge equipped enough to keep it fresh. All the mess is underneath and no, you don’t need to move to Australia to uncover the bullshit, you have to stay here and refuse to eat the cake.

I wonder what the ovens at Nkandla look like? They probably have great temperature control, because it’s clearly never too hot in Zuma’s kitchen. He never needs to get out. And it doesn’t seem like he ever will, does it? It doesn’t matter how many times we fuel the fire with “pay back the money”, he just stays there, cooking up another shit storm.

No happy ending here
South Africa needs to stop falling for fiction. Stop buying into the Castle advertisements; the only way our society would actually look like that, sincerely, is through beer goggles. The truth is, our society is flawed. It’s diseased and it’s not okay.

This is a grim fairy tale. Fairy tales are myths, sold to little children who grow up to find out that happy endings are just not realistic. South Africa is not a fairy tale. And we need to grow up. We need to stop settling for this “happy ending”.

Although paying back the money is necessary, it is not going to solve all our problems. It’s not going to result in a prince and princess riding off into the sunset because a couple of million rand has helped solved economic inequality, racism, white supremacy, access to education and basic human rights.

And riding off into an Australian sunset isn’t going to solve that either. Stop falling for the picture book version of this country’s story and start writing the one that matters.