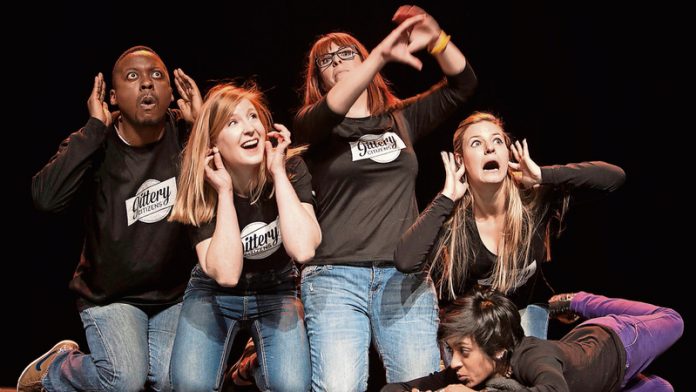 South African stand-up comedy is on the up and Trevor Noah’s success in the United States and Loyiso Gola’s debut on Australian TV only elevate its profile and calibre internationally.

Bubbling under, however, are movements trying to establish an improvisational comedy scene in the country.

There’s Toni Morkel’s Causing a Scene, Johannesburg’s long-running improv troupe, active since 2009. But more visible are the Jittery Citizens, a talented group who see themselves as the country’s premier improvisation troupe.

Co-founded in 2012 by Wits University comedy performance and physical theatre graduate Claudine Ullman, it comprises performers such as James Cairns, Nicholas “Pule” Welch, Mpho Osei-Tutu and musical veteran Tony Bentel. They stand out because of their dedication to the craft and their passion to make improv a business and a legitimate way to make theatre.

Apart from corporate work and running workshops at schools, Jittery Citizens have a regular slot on the last Sunday of every month at the Market Theatre. The shows, dubbed Armando Nights, take place at Kippies. And the group will be at the National Arts Festival in July.

“We would like to make improv comedy as big as stand-up comedy is in the country. So far we’re a little pin-prick – it’s a slow process, but the only way to entrench improv is to perform it. I especially want to change the way South Africans feel about improv,” says Ullman, who is also getting into stand-up comedy.

Improvisation and the Theatre
Short-form improv is characterised by short scenes constructed from a predetermined game, structure or, more popularly, a word or idea suggested by the audience. The American theatre academic and acting coach Viola Spolin is credited with having created many of the first short-form exercises in the 1940s, 1950s and 1960s in her book, Improvisation for the Theatre (1963).

British playwright and director Keith Johnstone, in the 1970s in Canada, outlined his ideas on improvisation in a book called Impro: Improvisation and the Theatre. He also invented theatresports, a staple of modern improv comedy.

What many know of improv comedy today, they have probably seen on the United States television series Whose Line Is It Anyway?. This has familiarised viewers with short-form improv, based on the foundations of Johnstone and Spolin.

The Armando experience you get from the Jittery Citizens’s Market Theatre shows includes a guest performer or celebrity comic. Stand-up comedians such as Kagiso Lediga and David Kibuuka have had turns at these hilarious romps. Ullman studied the style of long-form improv under Armando Diaz at the Magnet Theatre in New York.

Long-form, mostly performed in New York and Chicago, is more concerned with storytelling, characters and themes. It may, for instance, take the form of an existing type of theatre such as a play or musical.

Spolin influenced the first generation of modern American improvisers at the Compass Players in Chicago, leading to the Second City – an improvisational comedy enterprise, renowned as the first-ever ongoing improv theatre troupe in the US and Canada.

Improv in Johannesburg
Ullman also studied with Second City in Chicago, an experience that has produced many of the original cast of Saturday Night Live and comedy stars such as Mike Myers, Tina Fey, Steve Carell and Eugene Levy.

“When I studied improv in Chicago and New York in 2010, it was male- dominated. The torchbearers for women were Amy Poehler and Tina Fey. When I returned in 2013, women had started to infiltrate improv in New York. The same is happening for women in the male-dominated stand-up and improv comedy scenes locally,” Ullman says.

The Jittery Citizens have made a tiny hole for improv in Johannesburg and are continuing to dig. Comedic and physical theatre performer Cairns says “the reason for this progress is due to the support of venues like the Market Theatre, the Auto and General Theatre on the Square and PopArt in Maboneng [in downtown Johannesburg], which are willing to take a risk on the development of the genre”.

Actor and writer Osei-Tutu’s observations about the industry give a glimpse into the history of improv growth in the Johannesburg underground.

“When I began my studies at Wits University there wasn’t a lot of education in terms of improv. In 2002 Joe Parker had improv shows in casinos. That didn’t last long due to the demand for stand-up comedy, but there were breakaway improv groups like Al Prodgers’ troupe and Chris Forrest’s Starship Improvised. Actors started forming their own troupes, like Toni Morkel’s Causing a Scene, and there were other groups in universities. Wits now has Drama for Life, which is issues-based improv theatre,” he says.

Living in the moment
The nature of improv is that it is not scripted; everything is created in the moment, on stage, but it relies heavily on being inclusive. Because of its spontaneity, it contains a huge risk factor.

Cairns elaborates: “The magic of improv is in people walking out thinking there’s no way the actors could not have planned that, because things can go hideously wrong. I did an improv show with Chris Forrest as a corporate gig and it went so badly, they chucked us out. Risk is a great thing in performance. It keeps you on your toes.”

Bringing in a South African nuance, multilingual stand-up comedian, actor and musician Welch, fluent in isiZulu and Setswana among other languages, adds: “Improv is fundamental to who we are as South Africans because we love seeing people try and flop. The failing is in essence a success.”

With stand-up comedy being so dominant, Welch believes South Africans are ready for something new. “Improv is part of our South African culture; it’s about making up stories as in our oral tradition and izinganekwane [folk tales]. As Jittery Citizens we’re about to extend on it by incorporating indigenous languages and ‘vernac’ to broaden the types of expression.

“There’s a spirit of play in improv and with it you can break out of the moulds of society. It’s a release that allows us to be free to be our identities. Performance is a way to claim a lot of things, including accessing each others’ lives. Improv can make it fun for us to be African.”