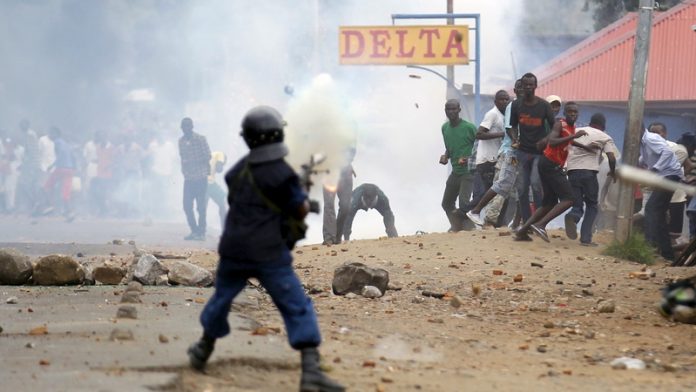 Armed groups threw grenades at stations in both the capital Bujumbura and in some provinces ahead of Monday’s parliamentary and local elections, delaying the start of voting in many of the centres, police and election officials said.

“Voting has not yet begun in many centres in the capital because election officials are trying to prepare materials and in almost all of the stations, these arrived late because of the overnight attacks,” Cyriaque Bucumi, the president of the Bujumbura electoral commission, told Agence France-Presse.

The opposition and civil society groups are boycotting Monday’s polls, saying the elections – which the authorities have refused to delay despite calls from the international community – will not be free and fair.

Burundi has been roiled by weeks of unrest that has included widespread protests and a failed coup bid and that has killed more than 70 people and send thousands fleeing the central African country following President Pierre Nkurunziza’s bid for a third term.

Monday’s vote is for local and parliamentary seats, with a presidential election due to follow on July 15.

Burundi was plunged into turmoil in late April when Nkurunziza launched his drive for a third consecutive five-year term, triggering widespread protests.

Opponents say his bid for another term is unconstitutional and violates a peace accord that paved the way to end 13 years of civil war in 2006.

Several top officials – including the deputy vice-president Gervais Rufyikiri as well as members of the election commission and constitutional court – have also fled the poverty-stricken, landlocked country.

AU won’t observe elections
The African Union (AU) will not observe Burundi’s legislative elections scheduled for Monday, Nkosazana Dlamini-Zuma, the chairperson of the commission of the AU, has said.

In a communique released on Sunday, Dlamini-Zuma said the “AU reiterates the imperative need for dialogue and consensus for a lasting solution to the crisis in Burundi”.

“[The AU] will not observe the elections scheduled for 29 June 2015,” Dlamini-Zuma said.

Officials flee
On Sunday, the country’s parliamentary speaker Pie Ntavyohanyuma said he had fled Burundi in fear of his life after opposing Nkurunziza’s bid for a third term in office.

“I was forced to quit the country due to the unrest caused by the president’s insistence on seeking a third term, which is illegal, which is unconstitutional,” Ntavyohanyuma told France 24 television from Belgium.

“I personally advised President Nkurunziza to drop his plan for a third term, but his answer was to threaten me, to humiliate me.”

At least three people were killed overnight in Bujumbura, residents said, a day before parliamentary and elections taking place amid an opposition boycott and fears of violence.

Nkurunziza has cited a constitutional court ruling saying he can run again, although the court’s vice president, another of those who have fled, said he and others had been pressured to rule in favour of Nkurunziza.

Dozens, including an opposition leader, have been killed in months of unrest, and the UNHCR, the UN refugee agency, says 127 000 have fled the country.

The opposition is boycotting both Monday’s vote and the presidential election on July 15. – AFP, African Media Agency.

Remembering the cruelty of strongman Nkurunziza and his regime

Burundi’s president was a cruel and tyrannical leader under whom no one was safe, not even schoolchildren
Read more
Africa

We don’t know if the coronavirus killed Pierre Nkurunziza. We do know that, in his absence, Burundi has a chance to take the pandemic seriously
Read more
Advertising
Continue to the category
Politics