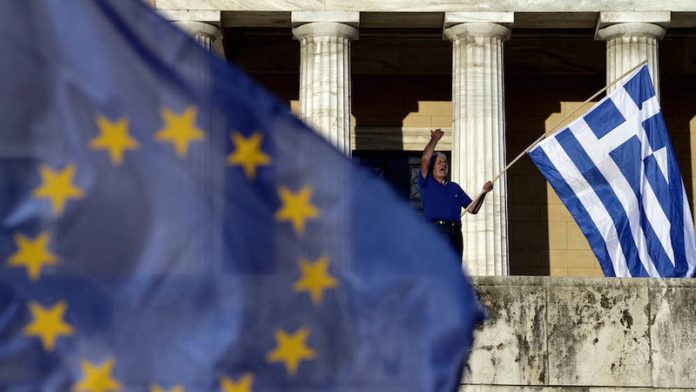 It’s now clear that Germany and Europe’s powers that be don’t just want the Greek government to bend the knee. They want a regime change. Not by military force, of course – this operation is being directed from Berlin and Brussels, rather than Washington.

That the German chancellor, Angela Merkel, and the troika of Greece’s European and International Monetary Fund (IMF) creditors are out to remove the elected government in Athens now seems beyond serious doubt. Everything they have done in recent weeks in relation to the leftist Syriza administration, elected to turn the tide of austerity, appears designed to divide or discredit Alexis Tsipras’s government.

They were at it again on Wednesday, when Tsipras offered what looked like an almost complete acceptance of the austerity package he had called a referendum on this Sunday. There could be no talks, Merkel responded, until the ballot had taken place.

There’s no suggestion of genuine compromise. The aim is apparently to humiliate Tsipras and his government in preparation for its early replacement with a more pliable administration. We know from the IMF documents prepared for last week’s “final proposals” and reported in the Guardian that the creditors were fully aware they meant unsustainable levels of debt and self-defeating austerity for Greece until at least 2030, even on the most fancifully optimistic scenario.

Forcing Tsipras out of office
That’s because, just as the earlier bailouts went to the banks and not the country, and troika-imposed austerity has brought penury and a debt explosion, these demands are really about power, not money. If they are successful in forcing Tsipras out of office, a slightly less destructive package could then be offered to a more house-trained Greek leader who replaces him.

Hence the European Central Bank’s (ECB) decision to switch off emergency funding of Greece’s banks after Tsipras called the referendum on an austerity scheme he had described as blackmail. That was what triggered the bank closures and capital controls, which have taken Greece’s crisis to a new level this week as it became the first developed country to default on an IMF loan.

The European Union authorities have a deep aversion to referendums, and countries are routinely persuaded to hold them again if they give the wrong answer. The vote planned in Greece is no exception. A barrage of threats and scaremongering was unleashed as soon as it was called.

One European leader after another warned Greeks to ignore their government and vote “yes” – or be forced out of the eurozone, with dire consequences. Already the class nature of the divide between the wealthier “yes” and more working-class “no” camps is stark. The troika’s hope seems to be that, if Tsipras is defeated by fear of chaos, Syriza will split or be forced from office in short order. The euro elite insists it is representing the interests of Portuguese or Irish taxpayers who have to pick up the bill for bailing out the feckless Greeks, or who will be enraged by any debt forgiveness when they have been forced to swallow similar medicine. The reality is the other way round.

No German or any other EU taxpayer has taken any loss in bailing out Greece. The real fear in Brussels and Berlin is not that people in countries such as Spain and Portugal, who have taken the brunt of eurozone austerity, will oppose relief for ravaged Greece, but that they’ll want an end to austerity and their own debts written off as well.

That’s what they call a “moral hazard”. But it has nothing to do with morality and everything to do with a dysfunctional currency union, a destructive neoliberal economic model enforced by treaty and an austerity regime maintained to ensure a return to profitability on corporate terms.

Antidemocratic firewalls
That’s why Merkel and the ECB mandarins want Greece’s surrender. Upstart democratic governments that challenge austerity must be crushed: the real risk of contagion is as much political as financial. This is, after all, a system in which unelected institutions and other states have the power to override elected governments – in fact to impose not only policies but in effect governments too, as we may be about to see in Greece. Antidemocratic firewalls are built into Europe’s institutions.

The Achilles heel of Syriza has been its simultaneous commitment to ending disastrous austerity and remaining in the euro. That has reflected Greek public opinion. But there was never going to be an honourable compromise with the creditors, or much mileage in trying to persuade the authorities they were good Europeans. For the euro elite, the dangers of Grexit are outweighed by the risk that larger states could follow a successful Greek stand against austerity.

Tsipras and Syriza’s determination to stay in the eurozone, come what may, has seriously weakened Greece’s hand. The economic dislocation of jumping off the euro train would doubtless be severe in the short term, though the costs of permanent austerity would almost certainly be greater thereafter.

But Syriza insiders say there is little preparation for what may be forced on them anyway. The relentless pressure of the EU bureaucracy demands a strong and clear-headed response. Right now, for example, that means the Athens government immediately taking control of its banks, currently shutting down all transactions.

The worst outcome of this crisis would be for Syriza to implement the austerity it was elected to end. A “yes” vote in this weekend’s referendum would probably lead to the government’s fall and almost certainly new elections. But even a “no” vote, which would offer the best chance for Greece, would need to be followed by more radical measures if the government was going to strengthen its negotiating hand or prepare the ground for a euro exit.

The real risk across Europe is, if Syriza caves in or collapses, that failure will be used to turn back the rising tide of support for anti-austerity movements such as Podemos in Spain or Sinn Féin in Ireland, leaving the field to populists of the right.

Either way, any Greek euro deal that fails to write off unrepayable debt or end the austerity squeeze will only postpone the crisis. If the Syriza government survives, it will have to change direction. Its fate, and its chaotic confrontation with the eurozone’s overlords, is going to shape all of Europe’s future. – © Guardian News & Media 2015