MH17 crash one year on: blame game continues over who shot down plane 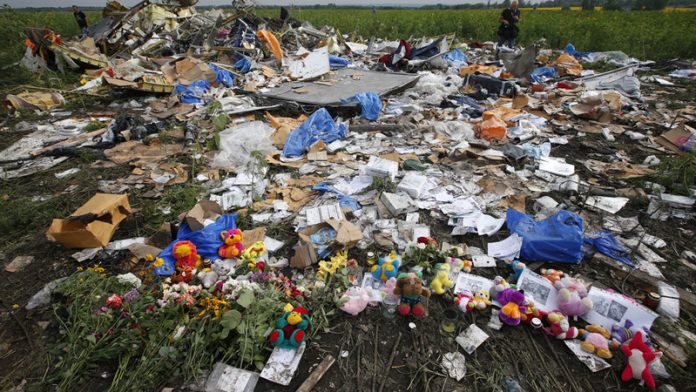 When she heard the bang, Natalia Voloshina rushed out of the small, one-storey house that passes for the village administration office in Petropavlovka, and looked up at the sky.

“I could see these tiny black dots high in the sky, which started getting closer and bigger, and then things started falling around us,” said the 43-year-old mayor of Petropavlovka, sitting at the same desk last week and recalling the afternoon of 17 July last year.

“We realised they were pieces of plane, but first we assumed it was a military plane. The rebels had been shooting down Ukrainian military planes in the area in the preceding days.”

The terrible truth soon became clear as dazed residents of Petropavlovka and other villages surveyed the fields around them. The remains were from Malaysia Airlines flight MH17, which had apparently been shot out of the sky with a surface-to-air missile. All 298 people on the Amsterdam-Kuala Lumpur flight died.

Shocking realisation
In the nearby fields, there were human remains: sometimes mangled limbs, sometimes intact bodies. There were also all the accoutrements of modern air travel strewn on the ground.

“People started bringing letters, medicines, suitcases, all kinds of personal possessions. Many people just came to be here and talk, because they were scared to go home. There were pieces of plane, overhead panels, everything. It was awful,” said Voloshina.

It took rescue workers several days to fill bags with the bodies: black for whole bodies and green for parts. The cleanup mission was complicated by the fact that the plane fell in territory controlled by the pro-Russia rebels, where Ukraine had lost its sovereignty. The crash site was never properly sealed off, and rumours spread of looting and interference at the scene.

A year later, there has been no conclusive proof of who was responsible, though most evidence points to separatist forces shooting down the plane by accident with a Buk missile system, possibly brought across the border from Russia. Messages appeared on social media from an account linked to the rebels saying they had shot down a Ukrainian plane, but were swiftly deleted.

Russia has furiously denied accusations that pro-Moscow rebels were responsible. Russian media suggested the plane had been shot down by a Ukrainian fighter jet, and even produced witnesses who had supposedly seen the plane being tailed before being downed.

Mostly the pro-Russia forces denied ever having used a Buk, though one leader, Alexander Khodakovsky, told Reuters he believed the separatists had taken control of such a system from Russia.

“That Buk I know about. I heard about it. I think they sent it back. Because I found out about it at exactly the moment that I found out that this tragedy had taken place,” he said last summer.

In an interview with the Guardian in Donetsk last week, he was more circumspect. “There was all the fuss about the Buks which were maybe there or maybe weren’t there, but honestly I can’t say anything with clarity because I didn’t see anything and didn’t hear anything. Recently, in order to stop any insinuations, I have tried not to talk about that theme.”

The head of the self-proclaimed Donetsk People’s Republic was more blunt. “I have said several times that we did not shoot down the Boeing,” said Alexander Zakharchenko from his office in central Donetsk. “We never had this kind of missile system. The Ukrainian army had a Buk. And so with a calm conscience we will happily receive any mission that wants to look into it.”

But Khodakovsky pointed out that the rebels last summer were still made up of several disparate groups with no central command.

“At that time it was chaotic here. One division didn’t know what the others were doing. We were sitting here and were responsible for our tasks; those who were elsewhere had other tasks,” he said.

Unsolved mystery
Exactly who was controlling the Buk remains a mystery, although there is some evidence it came from across the border and may have been manned by a Russian crew. In the days after the crash, the Ukrainian security service released what it said were phone taps that implicated a number of separatist leaders, including Igor “the Demon” Bezler, who ran the town of Gorlovka at the time but has now left the region. An attempt by the Guardian to question Bezler ended with him threatening to kill the interviewer, but one of his former prisoners said Bezler could not have shot down the plane.

“The recording they released was about another plane. I was there when he was talking about it,” said Vasyl Budik, during a recent interview in the town of Slavyansk, where he works as an adviser to Ukraine’s defence ministry. He spent three months last summer as a prisoner of Bezler in Gorlovka. “When he was told about the passenger plane later, he was going crazy; he understood that there would be major consequences for the rebels. But Bezler had nothing to do with it. He couldn’t believe it.”

In Moscow, amid public denials of involvement, diplomats scrambled to establish what had happened. A diplomatic source in Moscow said scheduled liaison meetings with counterparts in the Russian foreign ministry were held as planned all last year, with the exception of the week after the MH17 incident. It was almost as though the Russians wanted to get their story straight before meeting foreign officials, the diplomat said.

On 29 July, 12 days after the incident, an intriguing column appeared in the Kommersant newspaper by the long-time Kremlin pool correspondent Andrei Kolesnikov. With its odd tone purporting to read Vladimir Putin’s mind, it read like no other piece he had ever written.

“If at the end of the day it turns out that the rebels really were responsible for this, this will radically change his attitudes to them,” wrote Kolesnikov, in what appeared to be a carefully calibrated transmission of a message he had been asked to put across. “Even if it turns out to be a fateful mistake. Innocent dead children … this would be a red line for him he could not cross. To cover up for those who did this knowing that they did it. No, this is a sin he could not countenance … Our policy of relations with the resistance fighters would be rethought once and for all. Vladimir Putin would ditch them.”

That is not what happened, however. Instead, in the weeks after the tragedy, Russian involvement in east Ukraine appeared to intensify. In mid-August, the Guardian witnessed a convoy of armoured vehicles crossing the border under cover of night; shortly after, a group of paratroopers were captured by the Ukrainians (Russia said they had “got lost”), and in late August came the battle of Ilovaisk , where regular Russian soldiers are believed to have taken part, despite Moscow’s denials.

The Dutch-led investigation into the crash has proceeded slowly, with a full report not expected until October. The investigators are believed to have concluded that the plane was indeed shot down by a Buk missile. Perhaps in an attempt to pre-empt this, the version of a Ukrainian fighter jet has been ditched by Russian media and a press conference was recently held in Moscow by the manufacturers of Buk systems, Almaz-Antey, in which they claimed investigations showed the plane had been hit by a Buk missile system that only Ukraine possesses. Other investigations, such as by the citizen blogging team Bellingcat, have suggested the Buk came from Russia, and was operated by a Russian military crew.

There has been talk in the Netherlands and Malaysia about an international tribunal to establish criminal responsibility for the shooting down of MH17.

Russia, however, has described the idea of a tribunal as premature. This week, the deputy foreign minister Gennady Gatilov tweeted: “Russia opposed to a #MH17 tribunal as politically illogical, unnecessary and complicated to create.”

Tough clean-up
On the ground, most of the debris has been cleaned up. In the village of Grabovo, where many of the remains of MH17 fell, and where even a few months ago pieces of the plane’s exterior could still be found scattered in the fields, everything has been cleared away. There is little sign of the horror of a year ago, although villagers occasionally turn up personal possessions in the field.

A proper clean-up of the plane wreckage only became possible in March, after a shaky ceasefire was signed in Minsk in February. Residents helped collect fragments and belongings from the crash, and in April a Dutch mission arrived to take away everything that had been collected in a big truck, paying residents for their time. Médecins sans Frontières sent a psychologist to work with the children of the village. Even now, walking in the fields is not safe: just a few weeks ago in a neighbouring village, a six-year-old boy was killed by a mine.

At the spot where much of the wreckage lay, a small makeshift memorial has been created with a few bedraggled children’s toys and some candles laid on the ground. A placard is mounted on the nearby electricity pylon, bearing a poem in handwritten red block letters: “Pause and pray / Feel the minutes pass / Here fell the Boeing / And in a terrible moment / Their lives were taken.”

The rebel leader Zakharchenko said he did not know whether there were any events planned to mark the one-year anniversary. “Why are you asking us? Ask the Netherlands. If they want to do anything we’ll guarantee their safety,” he said.

Voloshina, the mayor of Petropavlovka, said the father of a Dutch victim had visited the area in early June, and had taken soil from the fields in which MH17 had crashed to keep as a memory. – © Guardian News & Media 2015