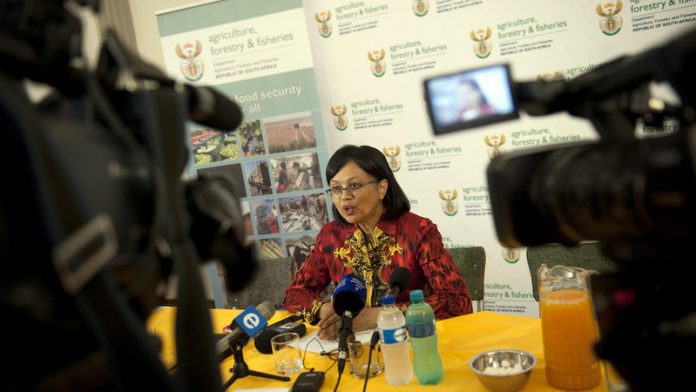 Questions have been raised about Energy Minister Tina Joemat-Pettersson’s role in a bid by a secretive offshore company to sign a huge oil deal with PetroSA.

The mystery entity, James Street Capital Partners, appears to be linked to the business empire of a controversial Nigerian-American donor to President Jacob Zuma’s education trust.

In January, James Street proposed to insert itself as an intermediary to buy and sell crude oil products for PetroSA, including supplying fuel to run Eskom’s diesel-powered generators, according to documents seen by amaBhungane.

Such a deal could be worth hundreds of millions of rands.

Amabhungane has learned that the company first approached Joemat-Pettersson’s office, which sent the proposal to PetroSA’s interim chairperson Nonhlanhla Jiyane, saying the ministry required feedback “on a regular basis”.

PetroSA staff told amaBhungane they interpreted Joemat-Pettersson’s intervention and Jiyane’s introduction as an “instruction”. They thought that internal resistance to it became the final straw leading to the suspension of chief executive Nosizwe Nokwe-Macamo and chief of finance Lindiwe Mthimunye-Bakoro last month.

But Joemat-Pettersson’s adviser, Garrith Bezuidenhoudt, denied any instruction was given. Bezuidenhoudt said the correspondence was routine, as was the request for “regular feedback”.

PetroSA spokesperson Thabo Mabaso said the company entertains “dozens, if not hundreds” of potential business partners every year. He said: “These are exploratory discussions that at most times would not result in anything substantive. In all such instances PetroSA adheres to its procurement policy and procedures.”

PetroSA has previously said the  executives were suspended so that it could investigate the parastatal’s poor financial performance.

Responding this week, James Street director Daniel Ogbonna said the firm had “withdrawn” its proposal as agreement could not be reached on the terms.

Mabaso said PetroSA held three meetings with James Street, “but these discussions have not materialised into any agreements”.

In contrast, people with direct knowledge said this week that PetroSA is “still talking” with James Street, and amaBhungane has seen documents that show PetroSA officials were actively working on the James Street proposal at least as recently as mid-May.

Little is known about James Street, which has no public profile.

One company of that name is registered in the United States state of Delaware and another in the Cayman Islands – both secrecy havens where the identity of a company’s owners can be hidden from the public and regulators.

AmaBhungane understands that PetroSA does not know who beneficially owns James Street or which registered entity it is talking to, although PetroSA’s Mabaso did not answer questions about this.

The only known evidence of James Street’s record is its own description of a freshly minted deal with PetroSA’s sister company, the Strategic Fuel Fund (SFF), which also reports to Joemat-Pettersson.

In James Street’s recent representations to PetroSA, it describes “a major storage transaction at Saldanha Bay” where the SFF owns tanks. A venture involving James Street has imported “over 7.2-million barrels of new oil” since April and “has already invested over $500-million”.

SFF operations chief Mfano Nkutha was not available for comment on Thursday. Bezuidenhoudt said Joemat-Pettersson did not introduce James Street to the SFF.

But evidence suggests that James Street may be linked to the Texas-based oil group Camac International Corporation, which also lists offices in Johannesburg, Nigeria, London and the Cayman Islands.

Camac’s founder and chairperson Kase Lawal enjoys a close relationship with the ANC and President Jacob Zuma, having donated to Zuma’s education trust since 2010.

But amaBhungane has established the following:

Ogbonna said: “[James Street] approached PetroSA with a business proposal to solve what we perceived as one of PetroSA’s business problems. After a few discussions with PetroSA’s management, [James Street] concluded it was best to withdraw our proposal simply because we [PetroSA and James Street] could not agree on the fundamental nature of the problems hence making any proposed solution commercially without merit.

“Mr Lawal was not involved in any capacity whatsoever in any of these discussions, nor is he part of [James Street].”

PetroSA’s Mabaso said: “PetroSA does not have any business dealings with James Street Capital Partners. As is the case, in the ordinary course of conducting business, PetroSA meets with dozens, if not hundreds of potential customers or suppliers in any given year.”

Joemat-Pettersson’s spokesperson, Thandiwe Maimane, said: “The request for regular feedback on matters referred from the ministry to the department and its entities is a normal requirement in the course of the business of the ministry.

“Similarly, the referral of correspondence to relevant units within the [department] or [state-owned enterprises] does not indicate any particular interest by the minister in any way, nor does it constitute an instruction or can it be construed as such. [Joemat-Pettersson] has no interest in this matter, and is not in a position to comment on behalf of external parties.”

Bezuidenhoudt said that, after the ministry referred James Street to Jiyane in January, “we have not received any feedback on subsequent engagements between the two parties”.

The  Mail & Guardian first wrote about Lawal in 2003 when he was the beneficiary of government-to-government crude-oil allocations Nigeria gave to South Africa, but from which the public derived no benefit. He denied wrongdoing.

Lawal has pledged large sums to Zuma’s education trust and accompanied Zuma in 2011 to receive an honorary doctorate from Lawal’s alma mater, the Texas Southern University.

After being cleared by the ANC’s internal ethics committee, prominent politicians from the Jacob Zuma’s administration are back in Parliament
Read more
National