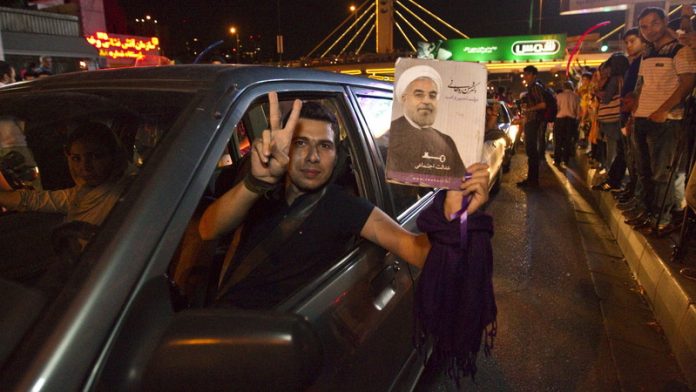 As soon as President Obama announced the historic nuclear agreement between the US and Iran on Tuesday, Republican presidential candidates raced to see who could get out the most hyperbolic, foaming-at-the-mouth condemnation of the potential for peace.

Republicans frontrunner Jeb Bush was first out of the gate, more than 24 hours before the deal was actually signed. He boasted on his YouTube channel : “History is full of examples of when you enable people or regimes who don’t embrace democratic values you get a bad result … it’s called appeasement.”

One wonders what Jeb thought when his brother, George W Bush, was cutting deals (and becoming close allies) with two of the most notorious dictators on earth at the time, Libya’s Muammar Gaddafi and Syria’s Bashir al-Assad . And speaking of regimes who don’t embrace democratic values, how long after Jeb is sworn in as president will he literally be holding hands with the unelected and ruthless King of Saudi Arabia, like his brother?

Senator Lindsay Graham, who has never met a war he didn’t like, lamented to Bloomberg’s Josh Rogin: “My initial impression is that this deal is far worse than I ever dreamed it could be and will be a nightmare for the region, our national security and eventually the world at large.” A failure to reach a deal with Iran would have almost certainly have led to a military confrontation, so naturally poor Lindsay is sad that a small portion of the Middle East will now likely be off the table for bombing. Indeed, what a nightmare.

Others, like Wisconsin Scott Walker, claimed that “this deal will likely lead to a nuclear arms race in the world’s most dangerous region”. Let’s put aside the fact that Iran hasn’t actively been pursuing a nuclear bomb, as US intelligence agencies have acknowledged for years. Republicans will happily ignore that the only country in the Middle East that has not signed on to the Nuclear Arms Proliferation Treaty in the region is Israel.

Who cares if no Republican has read the full text of the deal, which won’t be given to Congress for days? And who cares that, if you spent 30 seconds applying their twisted logic to Republican presidents, it would make no sense? Republicans, who were always reflexively against any deal that would limit the Iranians’ nuclear programme and may stave off war, seem downright furious diplomacy prevailed over the threat of more missiles.

Many of the Republicans’ statements on Iran in the past few months have just a word salad of insults – “evil”, “malevolent”, “corrupt”, “terrorists”, “the devil” – as though there were a contest to see how many despicable adjectives they could fit into one paragraph. Many of today’s statements then immediately condemned the fact that in Iran crowds sometimes chant “Death to America”. Gee, I wonder why a few people in Iran say hyperbolic things about the US? It’s not like our leading politicians would ever sing songs about blowing up Iran – oh, wait .

Now the big criticism, just like when the framework from the deal was announced months ago, is that the Iranian president, Hassan Rouhani, was smiling and telling his people that Iran got a good deal. Of course he’s telling his people it’s a good deal, just like Obama is telling that to Americans. What do they expect Roubini to do – get on national television and start crying about how they were brilliantly out negotiated and are now forever screwed?

For Republicans, the Iran nuclear negotiations have never been about getting “a good deal” for the US. They’ve simply wanted to preserve their ability to kill people in the Middle East whenever they want, and continue to indulge their fetish of American superpower . It doesn’t matter to Republicans whether bombing Iran virtually guarantees that actually will pursue a nuclear bomb (which, again, right now they’re not), or that a deal will hurt the hardliners in Iran that Republicans profess to hate. It only matters that they continue to have an enemy to bomb in the Middle East, and a president to criticise here at home. – © Guardian News and Media 2015

It is Zondo's legal end game and will leave the former president, his supporters and those implicated in state capture to increasingly play fast and loose at imputing political motive to the commission
Read more
Special Reports

Dr Sumy Thomas: Deciphering the human puzzle, from the inside out

Allegations of bribery against the bank’s chief executive, Jacques Celliers, thrown up in a separate court case
Read more
Advertising