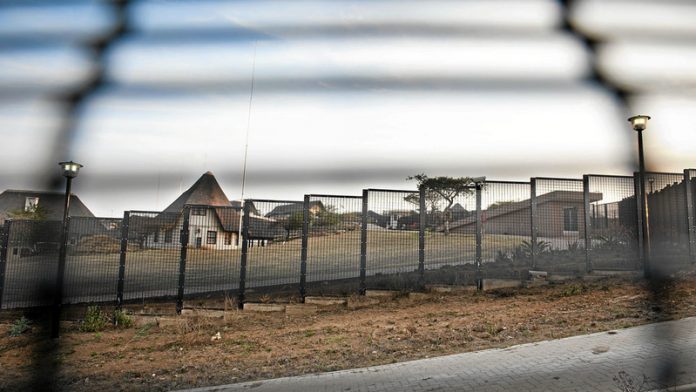 The famous body of water in President Jacob Zuma’s Nkandla homestead is more than just a firepool, it is also a recreational facility, according to parliamentary ad-hoc committee on Nkandla chairperson Cedric Frolick.

He made the pronouncement after the committee’s visit to the president’s KwaZulu-Natal homestead on Wednesday, in which MPs inspected the 21 South African National Defence Force (SANDF) houses on site, the pool, the kraal and other security upgrades.

Frolick spoke to journalists after the tour of the facility, saying what they saw was a pool that was a recreational facility but also a water resource that could be utilised to fight fires.

The MPs visit to Nkandla began with a briefing from Police Minister Nathi Nhleko on Tuesday, in which he stressed the possibility of more money being spent on security upgrades. He said media exposure had compromised the upgrades.

A handful of ANC supporters greeted the committee on Wednesday.

The media were only allowed to view certain parts of the compound, including the clinic, visitor centre and the 21 houses, with mattresses on the floor, that are supposed to house members of the SANDF.

MPs toured the entire compound, with some live tweeting their impressions throughout the visit.

Excessive upgrades
After the tour, which included MPs from the Democratic Alliance and Freedom Front Plus, DA leader Mmusi Maimane said it was clear that the upgrades far exceeded the minimum requirement to secure the private home of a president of the republic and would not have been undertaken to that scale were it not for the president’s intervention.

“There is direct causality between the escalation of the scope of Nkandla and Jacob Zuma’s occupation of the office of the president. Everything we have seen today reinforces our stance that President Zuma clearly unduly benefited, as the public protector found. The report erroneously produced by the police minister must summarily be rejected on the grounds that it is both irrational and at odds with the Constitution.

“In his report, Minister Nhleko absolved the president of any liability for the cost of the upgrades to Nkandla by determining that the kraal with culvert and chicken run, swimming pool, amphitheatre and visitor’s centre were all ‘security features’.”

According to Nhleko’s report, the fire pool was the best water source available at Nkandla to replenish fire engines, while the kraal had significant spiritual and cultural value that extended beyond the storage of animals.

Maimane said if the upgrades were indeed necessary for security, their installation was not a cost-effective use of public funds as they were far in excess of the minimum standard required to meet security needs.

“The construction of a swimming pool with surrounding entertainment area cannot be accepted as the most appropriate means to address concerns regarding fire safety, nor were the houses constructed for the SANDF at a cost of R6-million each at all reflective of this exorbitant price tag. If the purpose of the upgrades was to secure the president, the South African public did not get value for their money. But rather, unfairly, footed the bill for trimmings that the president himself must be held liable for.

“Our visit made it clear that the scope of the project was never to secure the president’s private residence but to upgrade it to the status of a presidential residence at a grossly inflated cost. Yet as a private residence of the Zuma family, the homestead and all its features will remain their property upon completion of the president’s term in office. This is an entirely unjustifiable requirement and unnecessary expense, and the police minister, try as he might, cannot convince us otherwise,” he said.

‘Silly stunts’
During the visit, the office of the ANC chief whip called out DA MP John Steenhuisen for joining the media inspection instead of the one arranged for the committee members.

“The DA chief whip is a member of the ad hoc committee and was supposed to form part of the team of MPs which was at the same time conducting oversight within the inside perimeter of the homestead. However, true to the DA antics of attracting media attention by hook or crook, he and his mob opted to pull silly stunts in front of the television cameras present. Unfortunately, the real victims of this disgraceful stunt are the journalists that had braved the rainy and cold weather to report based on witness account regarding the security improvements at Nkandla.

“This conduct of the DA MPs was not in keeping with MPs’ oversight function, but a disgraceful stunt, which interfered and violated the media’s right to conduct its business. The DA’s well-orchestrated disruption of the media site inspection not only deprived the public who rely on media of the facts regarding the president’s residence, but also served to distract attention from the important oversight work of the ad hoc committee,” the ANC said.

The MPs will on Thursday deliberate on what they discovered during their visit to Nkandla, compared with the police minister’s report, and conclude their visit on Friday with a meeting to evaluate the work done and determine their next step.