Nuclear storm brews as board tries to oust energy chief 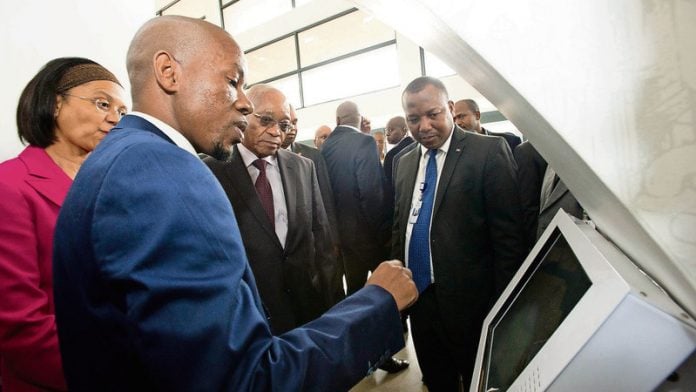 After three years in charge of the South African Nuclear Energy Corporation (Necsa), its chief executive still hasn’t got his top security clearance.

Yet Phumzile Tshelane, a vocal and dedicated proponent of the government’s controversial R1?trillion nuclear new build programme, wants his contract renewed when it ends on July 31.

More on the nuclear deal:

Most Necsa board members are in open conflict with Tshelane and have written to Energy Minister Tina Joemat-Pettersson, expressing implacable opposition to his reappointment and questioning his fitness for office.

With time running out either to renew Tshelane’s contract or identify and groom his successor, Necsa faces a leadership crisis at the precise moment the government is on the cusp of issuing the main tender for the nuclear build project.

Security clearance
Necsa is expected to drive the nuclear programme’s local skills development and industrialisation plans. As Eskom’s fortunes have waned, Necsa’s status as the country’s other repository of nuclear skills has turned it into the energy department’s key asset.

One of the board’s biggest concerns about Tshelane is that he has “to date failed to successfully obtain the necessary [top-secret] security clearance from the national security agencies, as he was obliged to do under his employment contract”.

Necsa operates the bulk of South Africa’s civil nuclear capability, much of it commercially sensitive, but, significantly, it also houses the remains of the country’s top-secret weapons-grade nuclear material from the apartheid era.

In a statement, Necsa did not explicitly deny that Tshelane has not been given top-secret clearance, but laid the blame at the door of the State Security Agency (SSA).

It said: “The [chief executive] went through a vetting process, as required by his employment contract, and it is well known that the finalisation of any vetting process depends on the SSA. On the contrary, it is members of the board behind these allegations who blatantly refused to undergo the vetting process while dealing with top-secret information of Necsa.”

Company resources
Most board members have been on a collision course with Tshelane ever since they attempted to discipline him earlier this year on multiple allegations of abusing his office. These included channelling Necsa money towards ANC fund­raising events and diverting company resources for his personal benefit.

Although Joemat-Pettersson ordered the board to conduct a disciplinary inquiry into Tshelane’s conduct late last year, she later recanted. The board refused to back down, however, and conflict has smouldered between them and Tshelane for most of this year.

The latest upsurge pits the majority of the board against Seekoe, whom they accuse of writing to Joemat-Pettersson without their knowledge in January to recommend a new contract for Tshelane.

They also accuse Seekoe of frustrating their subsequent attempts over several months to meet the minister to discuss Tshelane’s future.

Significantly, the board initially asked Seekoe to set up a meeting with the minister on April 1 – exactly three months before Tshelane’s contract was due to end on July 31. The Nuclear Energy Act states that the minister must consult the Necsa board before appointing the chief executive.

Twenty allegations
Last week, finally, the majority of board members wrote to the minister to state their opposition to a new contract for Tshelane, restate their case against him and complain about Seekoe’s attempts to retain him. They appear to have only last month discovered the existence of Seekoe’s January letter.

AmaBhungane has seen both Seekoe’s letter to the minister, dated January 24, and the board’s letter of protest, dated July 14.

The letters are a study in contrast. Whereas Seekoe praises Tshelane’s “strong, goal-oriented and strategic leadership”, his board colleagues believe that, “if [Tshelane] remains [chief executive] of Necsa, the organisation will further deteriorate in all aspects and become a large burden to the state”.

In its letter, the board levels nearly 20 allegations against Tshelane, including:

It concludes that retaining Tshelane will “tarnish South Africa’s reputation as a leader in nuclear technology and be compromising to our security”.

‘Personal agenda’
Necsa says the letter sent to Joemat-Pettersson by Seekoe “clearly stipulated his personal opinion and did not assume to represent the board of Necsa”.

Necsa also denies that Seekoe blocked the board’s attempts to meet the minister and makes a series of counter-allegations against the three board members who wrote to Joemat-Pettersson: attorney Medi Mokuena, advocate Nazreen Shaik-Peremanov and Jeetesh Keshaw, who is seconded from the energy department.

“The letter you mentioned that recommended Mr Tshelane’s contract not be renewed was neither seen nor acceded [to] by all the members of the board, including the chairperson and the [chief executive] … It was only a few board members who in their own accord [sic] drafted the letter to the minister; their view is not supported by any resolution of the board. This indicates a desperate attempt by some members of the board to frustrate the renewal of the [chief executive’s] contract for their personal agendas.”

Unbeknown to the board, Seekoe sent his letter to Joemat-Pettersson only a month after she had instructed the board to launch a disciplinary inquiry into Tshelane’s conduct, and just days before they acted against him.

AmaBhungane has previously reported how Joemat-Pettersson subsequently performed a spectacular about-turn, calling off the inquiry one day after the board formally notified Tshelane of his suspension.

Her change of heart is said to have been a result of political pressure to protect Tshelane because of his key role in driving the nuclear new build programme.

‘Strategic direction’
Joemat-Pettersson instead urged the board to focus on the entity’s “strategic direction”, which includes playing “a significant role” in the new nuclear build programme, and launched a separate inquiry into “the affairs of the board” more generally.

But the minister’s intervention has not halted the all-out war between Tshelane and Seekoe on the one hand and the rest of the board on the other.

In April, four board members filed an alternative dispute resolution with the Companies Tribunal, asking it to mediate between them and Seekoe. The tribunal provides an alternative for company directors to settle disputes among themselves instead of going to court.

The board members have complained to the tribunal about the “inconsistent, arbitrary, unilateral manner in which [Seekoe] runs board activities”.

They accuse Seekoe of trying to prevent the board from meeting to discuss Necsa matters and of failing to implement board resolutions – such as requesting a meeting with the minister to discuss Tshelane’s future.

“It is with deep concern that the board has to remind you that you are not the chairperson of your own self but of the board. Unless delegated by the board … you may not act as if you are the board,” reads a letter annexed to the board members’ affidavit to the tribunal.

The papers also reveal how the conflict has claimed the career of Necsa’s group executive of nuclear compliance services, Joseph Shayi, allegedly at Tshelane’s instigation.

Shayi is in charge of nuclear safety and security at Necsa and has served the organisation for nearly two decades.

The board nominated Shayi to act as chief executive in February when it suspended Tshelane pending his disciplinary inquiry. It later discovered that Tshelane had terminated Shayi’s contract without board approval, and offered him a R1.15?million settlement to leave the organisation six months early.

Necsa said Shayi’s contract came to an end and was not renewed.

Responding to broader allegations, Necsa said: “The minister initiated a formal investigation in which the chairperson, the [chief executive] and members of the board compliantly participated.

“The various allegations from the Mail & Guardian’s questions will have been addressed in such an inquiry and its report, which is currently with the minister.”

‘Management issues’
The energy department said it would not respond to what it called “unsubstantiated allegations” against Tshelane until the minister’s task team has completed its work on “management issues at Necsa”.

It added: “The filling of the Necsa [chief executive] post will follow normal prescribed processes and, once completed, a communiqué in this regard will be issued.”

Nuclear storm brews as board tries to oust energy chief Necsa, a key player in the government’s planned R1-trillion nuclear new-build programme, is at war over the future of its chief executive.

Necsa board members are trying to fire the CEO, but the energy minister is insisting that he stay on.
Read more
Opinion

The South African Nuclear Energy Corporation claims "some myths have been deliberately perpetuated about the company".
Read more
National

An ugly battle over the suspension of Necsa's chief executive has split state nuke company down the middle.
Read more
National

Rob Adam is going to a construction group that will bid for the massive government nuclear tender.
Read more
National

Low-level radioactive waste packages accumulated from the 1960s at the Nuclear Energy Corporation South Africa in the North West has been removed.
Read more
Advertising
Continue to the category
Politics