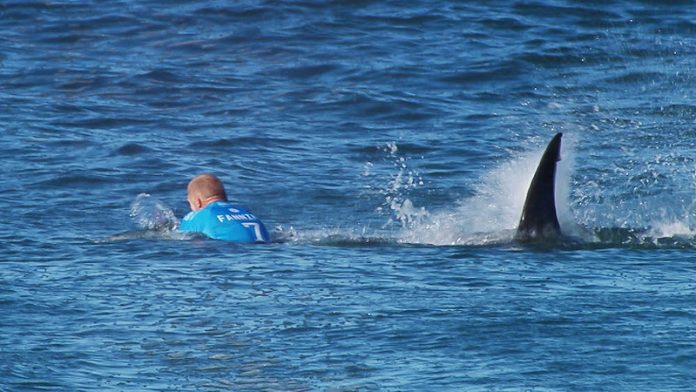 The giant fin. The man in the water. It is an image to set pulses racing and make hearts leap out of mouths. In the words of a commentator who had to respond to the live television images of champion surfer Mick Fanning fending off a shark attack during the J-Bay Open: “Holy shit … Excuse me.”

The live coverage of the contest then cut away, presumably to spare viewers the sight of blood spurting from the sea. But Fanning fought off the shark – apparently you really can deter them with a punch or two – and swam desperately to safety.

It would be great to play the lofty cultural commentator and sneer at people who’d rather watch footage of a surfer being attacked by a shark than pay attention to serious news, but I watched this video several times on Sunday night. Sharks fascinate me, and Fanning’s escape was a mesmerising spectacle.

In the brief image when man and shark are clearly seen together in the water, the horror and amazement come solely from the size of that dorsal fin. The sublimity of sharks has a lot to do with our imaginations filling in what we can’t see. Their habit of attacking near the surface with that dark fin sticking out of the water invites us to picture the unseen beast below – doubtless exaggerating its size and ferocity in our minds.

It is obviously rare to see an attack like this, filmed live, with the almost corny image of the gliding fin slipping in and out of the water exactly as a film director might seek to stage it. More often, news reports can only show a surfboard with bite marks or a shocked beach crowd.

However much concerned environmentalists (rightly) try to de-sensationalise sharks, there is no escaping the fear and thrill of the knowledge that, every time you go in the sea, something out there has the speed, appetite and enormous jaws to eat you. Or in my case, something under the bed. After seeing Jaws as a child – I got into the cinema under age – I used to fear sharks were somehow in my bedroom. But sharks also appealed to my sense that there are strange and wonderful things in this world, and they still do.

Even before seeing Steven Spielberg’s 1975 film, I was hooked on the nightmare story of a serial killer great white chomping its way through bathers and boats that the movie is based on. A copy of Peter Benchley’s bestselling novel Jaws was passed round at primary school. I learned some proper swearwords from it. I also learned – rightly or wrongly – that sharks are true-life monsters, menacing humanity from the depths.

It is ultimately all the fault of Steven Spielberg. After seeing Jaws it is impossible to go in the sea without your mind creating its own Spielbergian shark scenarios. He recognised something perfect in the meeting of shark and camera and mind.

The image of Fanning in the water next to that mesmerising fin proves once again that sharks are magnificently, stupendously cinematic. Now you see them, now you don’t. They inhabit a world few of us will ever explore in depth, another reality below the waves.

The sea is the unconscious of planet Earth and sharks are the monsters in its green sleep. Encounters with them are marvellous adventures, as Fanning rightly recognised. His amazed description of his experience acknowledged what too few accounts of sharks ever do – that to come close to one is an incredible privilege. Sharks need to be protected so they can go on inhabiting the cinema of the imagination. – © Guardian News & Media 2015

Australian surfer attacked by shark in SA back in the waves