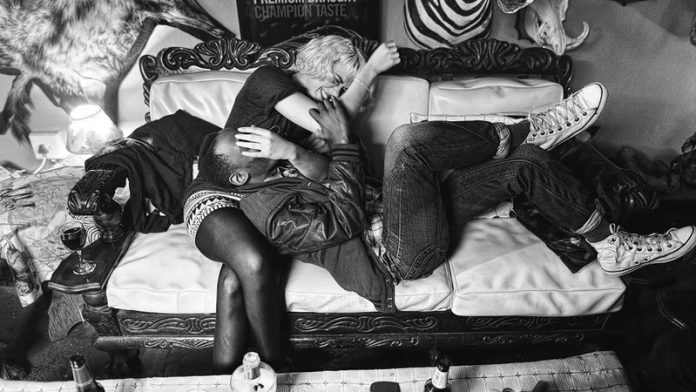 In unassuming lower case, the words “in loving memory of 1991 …” float against a black screen, carving fine, blood-red lines into the otherwise mostly bleak, greyscale impression of Johannesburg in Sibs Shongwe-La Mer’s first feature, Necktie Youth. The self-consciously cryptic preface can only be assumed to be an obituary to the birth year of the 23-year-old director, and it strikes the mournful opening chords of the surprisingly tender elegy to youth that follows.

With five nihilistic words, the spirit of renaissance that may once have characterised the South African experience is inverted and grieved. Built on the foundation of real-life experience, the film beautifully observes the aftermath of tragedy among a hedonistic, multiracial circle of suburban young adults. It slots (not incidentally, I suspect) into a well-established cinematic tradition in the vein of Larry Clark’s Kids (1995) and Ken Park (2002), or Catherine Hardwicke’s Thirteen (2003), but Shongwe-La Mer’s undeniable talent and novelty lie in his successful transposition of garden-variety adolescent ennui into a metaphor of existential stillbirth in a post apartheid era of disillusionment, hyper-mediation and alienation: I am, because I am going to die.

As profound as it is precocious, Necktie Youth represents the first really distinctive cinematic voice to emerge from a generation of young South Africans to whom the country’s pre-democratic history is largely a second-hand abstraction. At last weekend’s closing ceremony of the Durban International Film Festival, Necktie Youth won an award for best South African feature film and Shongwe-La Mer also took home the prize for best direction.

The movie opens with a morbid vignette that is the source of a melancholic undercurrent beneath the delicate meniscus of the group’s superficial interaction throughout the film. A gardener in overalls blows leaves off a neat driveway in the morning light. Two domestic workers chatter in front of a kitchen sink. A half-eaten breakfast sits forgotten on a table. A voicemail message from a young woman drifts over the domesticity in wispy, desperate tones, a plea for connection barely concealed by her repressed monotone: “I really just need to see you for a bit, I think …,”; “My mom doesn’t think this is a good environment for me, or whatever …”

The crystallising of a contemporary elite class
To whom it is addressed is unclear, and the tragic sense that it’s too late is implicit in the past tense of a prerecording. After a noncommittal, “Seeya round,” the pretty Emily places a stepladder next to a tree and unceremoniously hangs herself with a skipping rope. The LED recording light of a live-streaming webcam in a nearby window flicks on and off, unaware of the gravity of its own transmission.

The suicide is the catalyst for the events that follow, and they are structured episodically to introduce a handful of affected characters whose lives are connected primarily by mutual loss and shared class standing. Their diversity signifies the crystallising of a contemporary elite class, rather than progressiveness, and they navigate the streets and the house parties of the city in a haze of drugs and economic privilege with which they do not know what to do, hankering to be set free to “float above it all”.

Using a device that might have been clumsy in a different film, each character is interviewed on the subject of the death by a journalist, revealing an irony definitive of modern youth. They find expression for the most intimate of thoughts in only the most public of places. The narrative is driven by understated tectonic shifts in the souls of its characters, rather than by overstated plot points, and hinges most centrally on the character of Jabz, since his relationship with Emily was the closest, and the pain of her loss the most irrepressible.

The remainder of our attention is shared among a number of other characters — including his best friend, September, played by the director himself — and the momentum is mostly sustained by the clique’s fitful, cynical conversation, as each negotiates a way of coping with trauma, usually by choosing not to deal with it at all. With their own self-destructiveness reflected back in the suicide, their interactions paint a portrait of young people set adrift in a world where the only choice is between self-absorption and cataclysmic oblivion.

New talent on the rise
The only escape from alienation is the obliteration of oneself. Perhaps the deftest stroke of the film is its constant, subtle allusion to wider context, which lies in the darkness just beyond the security-lit bounds of their existence and is a reminder that their pathology is symptomatic of a sick society, rather than purely individualistic. They discuss among themselves, with a defensive rather than callous detachment, the brutality of poverty and “that apartheid stuff…”, while portraits of Mandela and Gandhi peer down from inside gilt frames.

Faced with the enormity of social inequality, aware of their own fortune, and paralysed by chronic millennial low self-esteem, they mask their helplessness with cultivated apathy that is as manicured as the perfect lawns of their parents’ homes. Necktie Youth has a beautiful, sincere fragility that is, thankfully, not quite disguised by the veil of hip aloofness protectively thrown over its most vulnerable parts. The brittleness of the carapace of being cool exists at all levels of the film, such that even the awkwardness of many of the nonactor cast in front of the camera feeds seamlessly back into the film’s themes of disconnection and narcissistic anxiety.

It is clear from this debut that Shongwe-La Mer has an innate ability for richness in cinema that is driven by sensitivity and complexity, and which exists in the intuitive detail. Certainly a talent to watch, the young director’s first work is soulful and effortless in a way that suggests it was propelled by a need for personal catharsis. It will be fascinating to see what he does next.