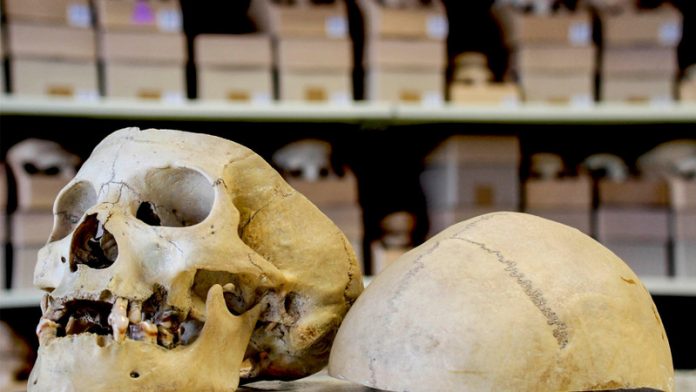 A human body lies in the veld. Scraps of fabric and desiccated flesh remain on the bones, but the face has been eaten away by time and the occasional scavenger.

The bones are withered by sun and wind and rain, and in some places they are cracked and broken. Eventually, the remains are discovered by passers-by – people on a hiking trip or construction workers building in the area.

The police arrive, retrieve what is left of the body, and open an investigation.

As part of their investigation, the South African Police Service may enlist the help of experts at University of Pretoria’s Forensic Anthropology Research Centre (FARC) to create a biological profile from the remains of the unknown person. The anthropologists clean the bones and use them to answer important questions about the unknown person’s life.

Were they male or female? How tall and how old were they? Did they identify themselves as black, white, coloured, Asian or the infamous “Other” category?

There are standard procedures to estimate every aspect of a person’s biological profile and because people’s skeletons differ between world regions, the FARC is working hard to establish South African standards – methods and data unique to our country and our diverse population.

At the University of Pretoria, we generally rely on bone measurements and large shape differences to construct a biological profile and help us estimate ancestry, sex and stature. Because we generally use metrics, there is no one specific thing about South Africans that makes a person unique.

It all comes down to large comparative and representative datasets and complicated statistics. We can say, with relative accuracy and with a high probability, that a person might have been from one of our major groups. We can estimate, but never determine.

Occasionally, when the bones are broken and forensic anthropologists cannot apply standard procedures and metrics, or when the individual does not fall within one of the standardised “racial” categories, we have to use a different method to figure out who is lying on the analysis table.

There is a large quantity of non-metric data available from people all over the world, thanks to the efforts and collaboration of international scientists.

Just like bone measurements, non-metric traits differ between population groups, because of the genetics of the population as a whole, or how they adapted to their environment over long periods of time.

In South Africa, there are many different populations. And when someone dies, we need to be able to provide information as to who they might have been, or at least where they came from.

As a young researcher at the University of Pretoria, my goal is to gather as much information about non-standard, non-metric traits as possible. I travel across the country, collecting non-metric data from the skulls of as many different individuals as I can find.

Some of these skeletons come from people who donated their bodies to science, and belong to known individuals with known medical records. Medical students dissect the donated bodies and the anthropologists study the bones.

Other skeletons are archaeological. They are from people who lived in South Africa long ago and provide information about migration in and around Southern Africa, who our oldest ancestors were and how they lived before we even became a country.

With the data collected at these institutions and with help from international scientists, we undertake statistical analyses to estimate the biological distances among the different populations.

Biological distance is a method of quantifying the biological relationships between populations by seeing which populations share similar morphological traits in the skeleton. People who grew up in similar environments and populations, who developed in similar geographic areas, will have similar non-metric “signatures”.

This information helps us to estimate how populations are related. For example, how closely are the Cape coloureds related to black people? How are modern South Africans related to our ancestors –the KhoeSan (formerly known as Khoisan), different African groups, Europeans, Asians?

With this information, we can evaluate the remains of an unknown individual to see which population they are most likely related to. We collect data from the bones, apply the biological distance statistics using information from the unknown individual’s remains and see where the individual fits into South Africa’s demographics.

We can also compare the individual to information from the rest

of the world with the use of our international database of non-metric traits.

Although not without its challenges, this accumulated scientific knowledge means that we may be closer to identifying the remains of an unknown person – reuniting them with their families so that they can be buried according to their wishes and providing much-needed closure for their loved ones.

On a larger scale, non-metric traits and biological distance help us explore how different populations have interacted with each other over centuries and how South Africa’s modern citizens fit together to form a nation. Our history and identity are written in our bones and physical anthropologists have the privilege to read it.

Is working with 3D printers a dangerous occupation?