Like it or not, SA schools set to teach Mandarin 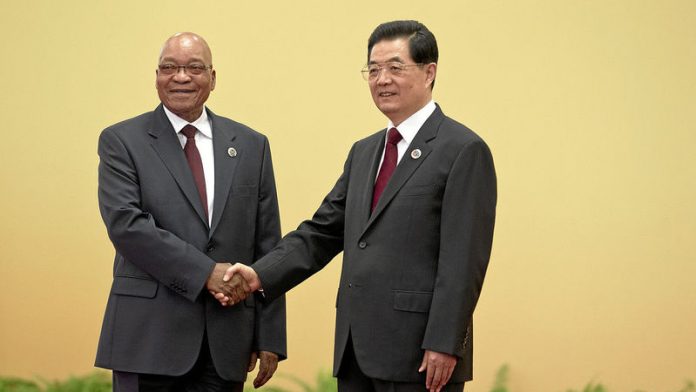 Despite strong disapproval by influential teacher union Sadtu, the government is going ahead with plans to introduce Mandarin to public schools next year.

Angie Motshekga’s basic education department has issued a circular to national and provincial education authorities informing them the Chinese language will be taught in local public schools as of January 2016.

The circular, which the Mail & Guardian has seen, is titled “Circular S10 of 2015: incremental implementation of Mandarin as a non-official language from 2016-2018”.

“The roll-out of Mandarin will be incrementally implemented in schools as follows: Grades 4-9 and 10 will be implemented in January 2016, followed by grade 11 in 2017 and grade 12 in 2018,” said the circular, which bears the signature of the department’s acting director general Paddy Padayachee.

The two-page document closes off by appealing to its recipients to publicise its message: “You are kindly requested to bring the contents of circular S10 of 2015 to the attention of all provincial and district officials, and principals and teachers of both public and independent schools.”

‘Worst form of imperialism’
The South African Democratic Teachers’ Union (Sadtu) expressed opposition to the plan in April, a month after Motshekga approved Mandarin and nine other foreign languages pupils can take as additional optional languages.

At the time Mugwena Maluleke, Sadtu’s general secretary, told the M&G that the union would reject teaching of Mandarin in local schools because it would be tantamount to a new form of colonisation.

“We’ll oppose the teaching of Mandarin in our schools with everything that we have. As Sadtu we see it as colonisation. As much as during colonisation some people were complicit in selling our souls, that’s what’s happening [again now]. We’re going to make sure that we’ve got serious campaigns against this particular colonisation. We see it as the worst form of imperialism that is going to happen in Africa,” Maluleke said at the time.

After seeing the circular for the first time on Tuesday afternoon Maluleke said: “This we’re going to oppose. In actual fact, tonight we’ll send an SMS to all our teachers to say you must reject it with the contempt it deserves.”

China-SA relationship
Motshekga first announced plans for teaching of Mandarin in local schools last year, following the signing of bilateral agreements between South Africa and China. In addition to strengthening business ties, the countries agreed to co-operate on education matters.

At the time Motshekga’s office said: “As [China is] South Africa’s biggest trading partner, it is important for our children to become proficient in the Confucius language and develop a good understanding of Chinese culture.”

The department finally approved Mandarin this year, along with German, Serbian, Italian, Latin, Portuguese, Spanish, Tamil, Telegu and Urdu as additional optional languages. But the circular does not mention anything about these languages.

Elijah Mhlanga, spokesperson for the department, has told the M&G the introduction of Mandarin is above board. “We have said this before and we will repeat it because it is necessary: Mandarin as a language in school is optional, unofficial and those who wish to offer it will do so. It’s not compulsory.”

Mhlanga questioned why there was no opposition to other non-official languages taught in schools. “Mandarin joins 15 or more other languages that are already offered in schools in the same category and these include; Greek, Portuguese, French, Urdu, Latin, German and others.

“Why is it that there are no complaints regarding these languages that already exist? An answer to that question will be interesting.”

Corruption accusations
Responding to this question and the department’s insistence that Mandarin was unofficial, Maluleke questioned why circulars have never been issued about other approved languages.

“If I want to teach Swahili, I go and check if the department has approved this language. The question we must ask is why have we not seen the department promoting such languages to an extent that it sends out circulars.

“Why Mandarin all of a sudden is the only language they are sending a circular about, then they still say it’s non-official? It’s [being] imposed. If people must exercise their freedom to choose, why are you not leaving it in the registrar and say this is one of the languages that have been approved officially? Why do you go into pain to even use our money to issue a circular?

“Clearly it’s corruption. The department must tell us what did they receive from China that they don’t want to be open about it. We’re not having a problem with the Chinese or their language. We have bilateral agreements with them and we’re in Brics. We have no problem with that.

“The issue is what’s in for these officials and these politicians. Does this thing of the tablets [being distributed in Gauteng schools] have anything to do with this particular thing? Who has received a kickback out of these tablets?  If you discount a tablet for me, do I have to give you my life?”

South African teachers are currently being trained in China for Mandarin pedagogy, Mhlanga told the M&G. “The Chinese government will provide support as far as teachers training as concerned. As I write [to you] this a group of teachers are in China where they are receiving training.

“For many teachers this is exciting and it is indeed an opportunity to expand their knowledge and learn new things. The opposition is contradicted by the huge interest shown by teachers who are quick to respond to opportunities of learning and teaching Mandarin.”

Mhlanga added: “There is demand from parents to teach their children the language, after all Mandarin is the most spoken language in the world.”