The nuclear race is riddled with hypocrisy 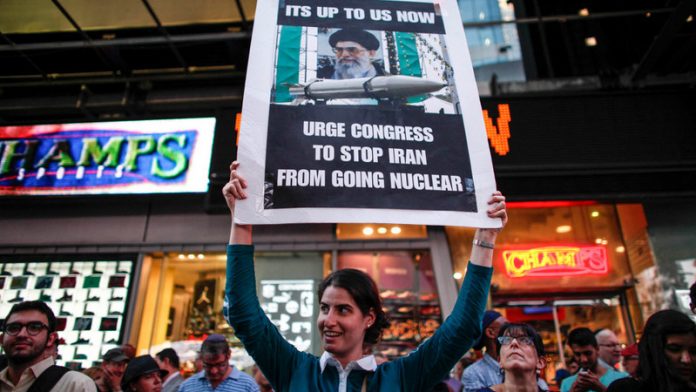 Warmongers in Israel, led by Benjamin Netanyahu, and their American Republican Party counterparts, are foaming at the mouth in their staunch opposition to the Iranian nuclear agreement reached in Vienna last month. As the vote for or against the deal in the United States Congress, scheduled for the middle of September, approaches, the noise decibels in their rave and rant against the deal are increasing. Of course, none of them have declared war on Iran, but in the absence of this deal, war is almost a certainty.

Those countries possessing nuclear weapons are dead against other countries developing that capability.

The US, Russia, France, Britain, China and a few others have enough stockpiles of these lethal weapons to kill the whole world many times over, yet they are determined to prevent any other country in the world from developing these. The relentless pressure against Iran and North Korea, accompanied by the imposition of economic and diplomatic sanction against these countries, is part of the drive to prevent other countries in the world from having them.

Nuclear weapons are cruel, dangerous and detestable. Look at the destruction and suffering they caused in Hiroshima and Nagasaki at the end of World War II. Humanity does not need them. But instead of these nuclear powers negotiating them out of existence, they only have agreements on limitations of the number of nuclear warheads each one might have.

Where is the sincerity in that? What is more, they allow Israel to possess nuclear weapons but fight strenuously to prevent other nations from dabbling in the nuclear space.

The US and other nuclear states might tolerate countries using nuclear energy for peaceful purposes, but only if they source all the enriched uranium from them. In other words, as many countries as possible should be prevented from enriching uranium, even if that enrichment is not up to nuclear bomb standard.

Although we in South Africa gave up our nuclear weapons capability voluntarily, we were still looked at disapprovingly by these countries when we embarked upon the development of the Pebble Bed Modular Reactor for publicly declared peaceful purposes. They were relieved and happy when we abandoned that promising project.

The sabre-rattling Netanyahu has declared for all to know that Israel will not allow Iran to develop nuclear bomb capability. In his address to the UN general assembly, he asserted that Iran was on the verge of manufacturing a nuclear bomb and that Israel was in serious danger. This was contrary to the assessment of many intelligence organisations and the International Atomic Energy Agency, who said Iran was very far from acquiring the capacity to manufacture a nuclear bomb.

In his controversial address to the joint sitting of the US Congress, he once more railed against the negotiations with Iran and vowed that Israel would not accept the outcome of the talks that involved the US, Britain, Germany, France, China and Russia.

The Iranians have always maintained that their nuclear programme was for peaceful purposes only. They resented being accused of working towards a nuclear bomb even after they declared otherwise.

Of course, I don’t know whether they have a hidden agenda for acquiring nuclear weapons. But why not take them at their word?

The US and its allies falsely accused Iraq of possessing weapons of mass destruction to justify their invasion of that country. They later bombed Libya and killed its leader, Muammar Gaddafi.

They support the rebel opposition fighting to overthrow the government of Syria. Their soldiers are in Afghanistan to prop up the government there in its struggle against the Taliban. Arab governments, truly democratic or not, were removed by the West, opening the way for murderous rebel groups to thrive.

As a result of all this violent meddling, the Middle East is a messy bloodbath in which the West played no small part. Refugees from this strife-torn region are now pouring into Europe in their tens of thousands.

The same countries that initiated the trouble are unwilling to accept the consequences of their actions. They don’t want the refugees in their countries. Are they spoiling for more warring in the Middle East? Have they not caused enough mayhem already? If not, why turn their backs on a diplomatic solution to their dispute with Iran over its nuclear programme? How else would they resolve the problem?

Fortunately for the people of the Middle East, it appears that the warmongers will not get their way. Apparently, the naysayers will not have the numbers in the US Congress to scuttle the deal. The UN Security Council has already accepted the agreement, and the British have rushed to reopen diplomatic relations with Iran. European business-people are falling over themselves to start trading with Iran once the sanctions are lifted.

Iran should not have nuclear weapons. But they should not suffer military attacks for a nuclear bomb they do not have.

Mosibudi Mangena is a former Cabinet minister and leader of Azapo.