‘A riot is the language of the unheard’ 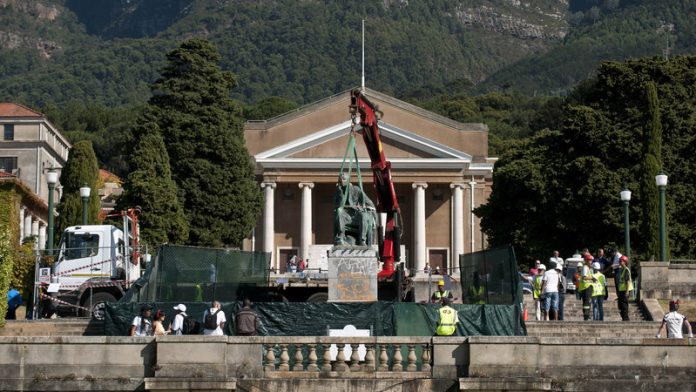 On August 17, three years and one day after the Marikana Massacre, the University of Cape Town awoke to a changed campus. This was not the kind of decolonisation that the Rhodes Must Fall movement and TransformUCT have been publicly advocating for many months now. It did not include the official renaming of Jameson Hall, the hiring of senior black faculty, or a reworking of the UCT curriculum. Nor did it constitute the subversion of the top-down power structure of the university into a democratic student, faculty and worker-led institute of education.

No. The change was of a different more elusive nature despite the unsubtle act of public art, which was its provocation. What occurred at the university was an expansion of consciousness through a discursive shift in the way we understand institutes of higher education in post-1994 South Africa.

In other words, suddenly, thousands of people at the university were talking about the relationship between the university and capital. Forced into the public domain during the past week has been UCT’s function as a “non-profit” corporation and its collusion with mining multinationals despite their atrocious human rights records (it receives millions from mining corporations and two of its council members were executives at Anglo-American). Also brought to light is UCT’s inclination to sell itself to attract capital and its willingness to sell its own students’ education in the name of the false equivalence of global competitiveness.

UCT’s investments in the mines, and in particular the murderous Lonmin (formally known as London Rhodes), was never a secret. All this information was publicly available. Yet, the collusion of elite power had been, until August 17, successful in hiding it from public scrutiny.

Now, however, UCT is being forced to justify its investment practices amongst a newly informed constituency.

To me then, nothing could have been more democratic than the unsanctioned act of protest that informed us all that “UCT has Lonmin shares!”

Yet people like UCT historian Rebecca Hodes contend quite the opposite: that such acts are not only undemocratic, but that they are an assault on liberal values of freedom of expression and tolerance. She said so herself in a recent article for the Daily Maverick in which she posits the Rhodes Must Fall (RMF) movement as a bunch of incoherent and intolerant students whose goal is to impose their own authority on everyone else.

However, the problem with Hodes’ argument lies both her misunderstanding of the philosophy of liberalism and her deceptive representation of the student movement.

Actually existing liberalism
While liberalism has always claimed to embody the values of democracy and equality, in practice liberalism incarnates the opposite. This is not just true of old racist philosophers such as John Locke and John Stuart Mill, but also of its current forms such as Hodes’ “pro-social justice” liberalism. This is simply because the philosophy cannot account for oppressive power structures.

This is why Helen Suzman’s liberalism tried to reform apartheid instead of destroying it and why current left-of-centre liberals try to tweak representative democracy to give it a more human face.

Rather than advocate the immediate assertion of equality despite institutionalised oppression, liberalism insists that, in practice, equality already exists within the current composition of society. Thus, those who exist outside the system, who are unwilling or unable to follow the rules of the game, are considered barbarous, otherised, and consequently criminalised.

In other words, the poor black shackdweller is falsely assumed to have the same ability to make her voice heard and to participate in the opportunities of society as the rich white chief executive. This assumption absolves authority from advocating structural change.

At UCT for instance, liberals like Hodes contend that freedom of expression and tolerance already exist because UCT does not censor its students nor prevent admission based on race. But if that were true, there would be no need for a student movement at all. The problem is that there is little tolerant, democratic or even free about UCT when, in fact, the university maintains its current elitist structure.

The university is a bureaucratic, elitist, top-down managed organisation where decisions are made by a governance structure of mostly white men. Structurally, this excludes the majority of faculty, the workers at the university, as well as the student body — none of whom have any real say in the running of the institution — except on occasions deemed it permissible by those in power. Management’s authority is then backed up and funded by a patriarchal system of racial capitalism ensuring that the playing field is never and will never be level.

This structural paternalism then, a far cry from purported liberal ideals, is the inevitable expression of actually existing liberalism.

Misrepresenting militant organising
The Rhodes Must Fall movement understands this, which is why they have continuously engaged in a critique of liberalism.

Yet the response from self-identified liberals such as Jeremy Seekings, Nicoli Nattrass, and now Rebecca Hodes, fails to engage with this critique at all. Instead, they consistently blame Rhodes Must Fall for not being willing to debate, for using hashtags instead of full sentences and for imposing their ideas on the rest of the university.

But this typical racist framing of black movements against liberal institutional power, ignores the facts.

Firstly, RMF has always been willing to debate and has done so on every occasion provided to them. Secondly, while RMF uses hashtags (the current social convention), they have also published lengthy, well thought out, and fact-based criticisms of their opponents argument. Liberals have ironically ignored these publications. Finally, despite assertions by Hodes, Seekings and Nattrass, these black students (some of whom are also so poor that they survive with the support of other student activists) have no institutional power at UCT and therefore cannot actually undemocratically impose anything on the establishment. Their successful take down of the Rhodes statue, far from authoritarian as claimed by Seekings and Nattrass some months back, was the expression of democratic popular power in the fact of massive structural adversity.

It is then unfortunate that Hodes’ refuses to acknowledge the root cause of her dislike of radical activism – mainly because they challenge her own role at the colonial university. Is this what makes Hodes so uncomfortable that she feels it is her place to vilify the movement and the students involved?

It is therefore not surprising that Hodes’ is unable to see the hypocrisy behind her support for the illegal defacement of the Ray-Ban sculpture in Sea Point, while she criminalises the “culture jamming” of Jameson Hall. Just like the glasses were an advertisement under the guise of public art, UCT remains a racist colonial and undemocratic corporation under the guise of an institution of public education. Since both represent the corruption of a public good by liberalism, both are in fact improved by the political art.

Without student and activist tactics of direct action, the Rhodes Statue would still be standing today and UCT students decolonisation would still be a pipedream.

It is high time, then, that academics and political commentators stop presenting inaccurate and insincere accounts of struggles against the status quo which do nothing but vilify the oppressed for employing the only legitimate means of protest available to them.

Backing the language of the unheard
Martin Luther King Jr, the American civil rights hero, is now a beloved historical figure of the liberal white establishment because of his commitment to non-violent protest. Yet mainstream history forgets that King inspired fear in the hearts of the white liberal establishment during the 1960s in spite of his call for peaceful protest.

What we also forget is that King, as a matter of principle, always refused to condemn other more militant black power organisations such as the Student Nonviolent Coordinating Committee. When asked to do so, he would always say:

“I contend that the cry of ‘black power’ is, at bottom, a reaction to the reluctance of white power to make the kind of changes necessary to make justice a reality for the Negro. I think that we’ve got to see that a riot is the language of the unheard.”

In other words, we need to stop condemning those who employ unsanctioned means to rebel against white supremacy and capitalism. To paraphrase King, only social justice through the redistribution of the land and capital and the reconstitution of radical democracy are the absolute guarantors of social cohesion.

If Hodes was a true advocate of decolonisation and the values that she claims liberalism espouses, she would focus her energy on condemning and fighting against the abhorrent power structure of this institution rather than seeking to undermine the legitimate resistance that it emboldens.

Jared Sacks is a Cape Town-based social justice activist and founder of the non-profit organisation Children of South Africa.