Germany’s populist ‘rag’ has a soul 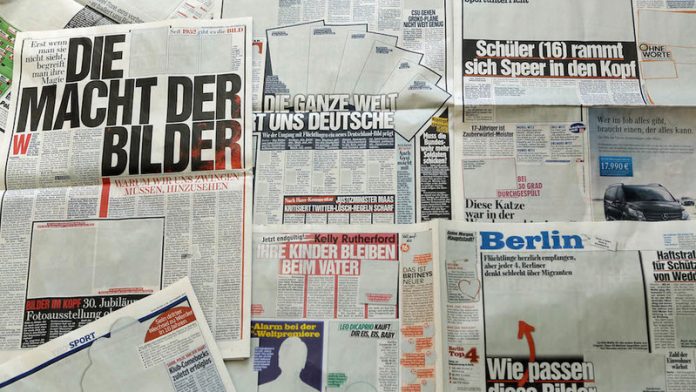 The gesture was as bold as it was typical of Bild, Germany’s biggest-selling tabloid. In response to readers’ complaints about its decision to publish the image of drowned three-year-old Syrian refugee, Aylan Kurdi, last week, the Berlin-based daily pulled every one of its news pictures on Tuesday.

On Wednesday, the right-leaning paper went further in its outspoken backing of the refugees’ cause, publishing a special four-page insert in Arabic welcoming refugees who had reached the capital and explaining where they could get help.

Headlined ‘Welcome. You have finally reached Berlin, what do you need to do now?’, the supplement included a map of the capital, labelled in Arabic, pointing out refugee housing centres, health clinics, language schools offering free German lessons and children’s playgrounds.

In contrast to its nearest British equivalents, the Sun and the Daily Mail, the German tabloid, often criticised as scurrilous, sensationalist and inflammatory, has been broadly sympathetic to the human plight of the tens of thousands of refugees who have reached Europe in recent months.

In its Tuesday edition, the paper said its decision to remove all news photographs was intended to “show the importance of photos in journalism” and that it was “worth fighting every day for the best”. It replaced all photographs in its print edition, which sells 2.2-million copies a day, with grey rectangles, and images on its website were also greyed out until midday.

The supplement published on Wednesday also featured a short list of useful German phrases with their Arabic translations, an explanation of the country’s asylum regulations, and a message from the mayor of Berlin, Michael Müller, also in Arabic, saying refugees would find the German capital “an open, tolerant and international metropolis”.

Bild has long been critical of immigration in general terms. Headlines in recent years have included “Every fourth baby comes from abroad” and “The bitter truth about foreigners and benefits: 90% of Lebanese and 26% of Turks are supported by our state”. But it has been highly vocal in its support for refugees, particularly those from Syria.

“We are helping”, one front-page headline said last month, above a picture of two exhausted children. The Daily Express front page of the same day proclaimed: “Migrants swarm to Britain”. Bild has also been fiercely critical of British Prime Minister David Cameron, describing Britain as “the slacker of Europe” for taking only 114 refugees for every million people, against Germany’s 905.

Unlike most British newspapers, including the Guardian, Bild gave a prominent slot to a particularly shocking picture of Kurdi, who died with his mother and brother as the family tried to reach Greece, lying face down on a Turkish beach. The paper said the image had prompted dismay and compassion and “shaken a million people awake”.

Bild would always be in favour of publishing controversial images, it said on Tuesday, because “the world must see the truth in order to change”. Strong photos “arouse emotions. They show beautiful, but also cruel moments. They let us sympathise with other people.”

Sympathy, it is fair to say, has not always been Bild‘s strongest suit. During the past five years of Greece’s economic crisis, the paper’s 10-million readers have been treated to headlines such as: “How the Greeks spend our wonderful euros”, “Not one cent for Greece”, “Will they break our banks?”, “It’s all their fault!”, “They don’t need our help!” and “Who can still believe the Greeks?”

Fiercely nationalist
The paper was founded by publisher Axel Springer in 1952, and bears the motto unabhängig, überparteilich – independent, nonpartisan. It sees itself above all as the champion of hard-working, law-abiding and penny-conscious Germans.

Bild has long been fiercely nationalist. It insisted for decades on referring to the former East Germany as the Soviet occupation zone. It remains unashamedly populist, although its famous scantily-clad Seite-Eins-Mädchen, or page-one girls, were relegated to an inside page in 2012.

It is almost invariably the subject of more complaints to the German press council than any other newspaper, but its stance is often surprising. In January this year, it launched a strongly-worded petition against the anti-Islamisation protest group Pegida.

Perhaps the most damaging charge against Bild is that it wields too much political power. In 2011, its rival Der Spiegel mounted a special investigation of its “moral standards and journalistic quality”, and concluded it was an incendiary publication that acted as a “right-wing faction” for Angela Merkel’s conservative Christian Democratic Union (CDU) party.

“In the corridors of the Reichstag, the ministries and also in the chancellery, there is a pronounced tendency to take Bild‘s headlines at face value … as a valid expression of the popular mood,” Der Spiegel wrote. Where Bild leads, it argued, Merkel follows.

It may indeed influence CDU policy in much the way the Daily Mail may influence Britain’s Conservatives, but media analysts say it does not wield the same clout as papers such as the Sun. German newspapers don’t usually endorse political candidates and Bild could not “make a chancellor in the way that Rupert Murdoch once made Tony Blair”, the independent Institute for Media Policy in Berlin has noted.

In any case, in the worst refugee crisis that Europe has witnessed since World War II, Berlin has not appeared to need much prompting from the country’s biggest-selling newspaper. Unlike Britain’s government, Germany has, unhesitatingly, opened its arms. – © Guardian News & Media 2015