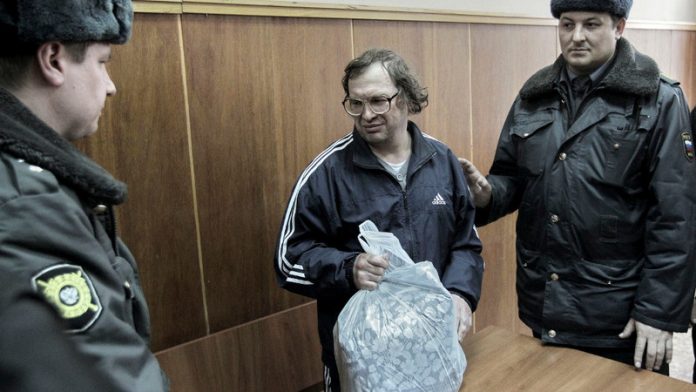 The slide in the marketing material speaks of the intention “to create a new, fair financial order, as a world mutual aid fund community primarily to free the people from the bondage of financial slavery”.

Sometimes the presenters adjust the message for the audience being parted from their money.

“We try to free people from financial bondage,” said the woman speaking to the dozen people sitting in a Soweto living room.

“This is about making money so nobody can stop you from buying everything you want to buy,” riffed the man speaking to 50 people in Soshanguve.

“We fight against the people controlling us through our money,” the presenter told 18 people in Sebokeng.

The extraordinary thing about the presentations at these three meetings in August – and dozens more elsewhere in the country, just in that month – is that there was no attempt to obscure the origin of this economic revolution, or what happened when the originator applied it in his native Russia.

“They brand Mr Mavrodi a criminal because they are afraid he is helping us throw off our chains and break free,” the Soshanguve group was told, according to one participant.

“They”, in fact, went beyond just calling Sergei Mavrodi names. In 2007 he was sentenced to four and a half years for defrauding Russians in a series of pyramid schemes named MMM. In 2003, United States authorities shut down a Ponzi-type scheme in that country. In both cases many investors lost a lot of money.

Nonetheless, from Rustenburg to Secunda and from Durban to Hillbrow, South Africans are flocking to presentations about a scheme called MMM, in which they purchase a virtual currency called “Mavros”, pitched at events using slides and banners with Mavrodi’s picture.

And at least some of those attending the events are convinced that handing money to a convicted fraudster with a string of pyramid schemes behind him is a good idea.

“So far I have put R300, but I am just waiting for another man to make me a loan, then I am going to put R5 000,” South African MMM participant Kgomotso (not his real name) told the Mail & Guardian. “Then I leave it there for five years, I don’t touch it, and I’ll be rich.”

By the internal logic of MMM, Kgomotso would be very rich indeed. At the 1% per day interest rate the scheme promises, or the 30% per month it says 1% per day is equal to, Kgomotso’s investment would be worth more than a staggering R34-billion in five years.

When told this, Kgomotso was surprised, saying that that information alters his plans somewhat. “I was going to work to pay the interest on the money I borrow, but maybe I will take a little bit back to pay for the loan so I don’t have to work to pay for it,” he said. “I don’t need that much.”

Nobody knows how much money the scheme has raised in South Africa so far, or how many individuals have put money into it. Unlike traditional Ponzi schemes, MMM makes no claim to any business activity or product; it does not sell milk cultures or health drinks, as do current similar schemes. As a result it requires no central organisation, and no single bank account. Instead it seems to use the bank accounts of individual members – a mechanism presented as necessary because of its “revolutionary” nature.

If all the money were deposited into one central account, ­”authorities” would be able to detect the flows and reverse the transactions, one South African sales ­meeting was told. “Therefore we don’t use one account, you have to give us your account so we can use that and they can’t stop us.”

The same argument, of liberation and revolution, is used to explain criticism of the scheme.

“People can’t accept the fact that MMM is actually paying and they want just to shout everywhere that it’s a scam and etcetera,” an individual purporting to be Mavrodi told South African participants in August. “It’s their right to think this ­’uneducated’ way.”

To the educated, MMM is not a scam but a stokvel of sorts, with eye-popping returns, possibly because Bitcoins (a virtual cryptocurrency) are involved.

“I don’t know exactly how it works, but I am not making an investment,” said Kgomotso. “I am just donating money to somebody, and then somebody will donate to me. People talk ‘investment’, but this is us helping each other.”

Although the scale of MMM is undetermined, it is widespread enough that the South African Communist Party (SACP) last week forwarded its members a warning about Mavrodi from the Russian Communist Party.

“We consider it our duty to warn fraternal peoples that this activity may result in bankrupting millions of people,” the communists warned, calling Mavrodi “extremely dangerous, especially for ordinary people who he knows how to cheat”.

The striking resemblance between classic communist theory – that capitalism is inhumane and unsustainable and should be toppled – and Mavrodi’s message of liberation is entirely incidental, said SACP spokesperson Alex Mohubetswane.

“If there is any ideology here it is the ideology of making money, it is a consumerist ideology,” he said. “There is no socialist politics here, just people driven by money and the things they want to buy with it.”

Since the party’s warning to members several people had approached it about MMM, Mohubetswane said, and the SACP was considering how best to take various civil and criminal complaints forward to stop what it fears may be “a tsunami”. But many participants were fearful of taking any action, he said, because they did not want to disturb the scheme.

“When it is making money, why would you ask questions?” said Kgomotso. “All you should ask is ‘How much money did I make today?'”