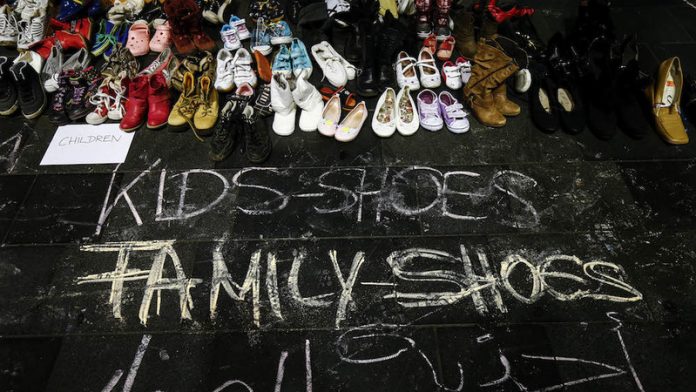 Last Friday night the first packed trains arrived in Munich and Saalfeld. Mainly from Syria, Iraq, Afghanistan and Pakistan, the people found the welcome overwhelming. Every group of arrivals was greeted with warm applause from hundreds of Germans; humanitarian workers lined train stations, gifts in hand. Many of the exhausted men, women and children, who had left their countries in the hope of a better life in Europe, were overcome with emotion by the cheering Germans.

This unprecedented trek to Europe is changing Germany, following recent images and stories in the media of neglected refugees stuck in Hungary for days as a result of the inaction by Prime Minister Victor Orbán; the scenes of despair at the border between Greece and Macedonia, where heavily armed police tried to stop men, women and children from continuing their journey to Europe; and the unbearable picture of the lifeless three-year-old toddler, Aylan Kudi, who was washed ashore in Turkey, drowned with his brother (5) and mother, as the family tried to reach a Greek island by boat.

Following weeks of silence, Chancellor Angela Merkel finally announced that Germany is able to cope with this crisis and it will open its doors to people in danger.

The scenes of burning hostels, with neo-Nazis fighting in the streets with police officers, some of them the sons and daughters of people who came to Germany in the 1950s and 1960s or later, seem overshadowed now by refugees carrying posters bearing the German flag and images of Merkel, whom some refer to as a “mother” who saved them from misery.

Dublin rule
It seems German politicians finally feel compelled to act, considering the sheer influx of refugees. Thus far, politicians in Germany have turned a collective blind eye to their Greek and Italian neighbours, who have for some time been battling to manage the swell of people making their way to Europe, insisting on the Dublin rule, that refugees have to be accommodated in the first European Union country they enter.

It appears that Europe remains divided, with Hungary, Poland, Slovakia and the Czech Republic unwilling to host more refugees, despite the fact that, besides Sweden and Austria, Germany is perceived by refugees to be the promised land. At least British Prime Minister David Cameron promised last week to allow more people from Syria into the United Kingdom and French President François Hollande supports efforts to resettle refugees equally throughout Europe.

Germany itself is not yet ready to accommodate an increasing number of people. German officials estimate that 800 000 people will enter Germany this year – at a cost of €10-billion. Thousands of teachers will need to be employed and 40 000 houses built to meet the needs of the refugees. Many people from the Balkans, who don’t have refugee status, will need to get quick access to the labour market or face deportation.

The situation was different in the 1990s, when at the height of the crisis in former Yugoslavia more than 400 000 people entered Germany.

At that time, the German economy was in decline. With its stagnant growth and high unemployment, the country was labelled the sick man of Europe. Like today, neo-Nazis and nationalists tried to exploit the situation. At that time many Germans feared that the refugees would take their jobs.

Currently, the mood is different. More than 60% of Germans back Merkel’s decision to open the doors to people in danger. But how long will this sentiment last?

Rapidly ageing population
Admittedly, Germany can finance the huge influx of people because this year the state’s budget surplus is more than €20-billion for the first six months of the year and with a rapidly ageing population it needs more young people. Thus, it is not surprising that the chief executive of Mercedes Benz, Dieter Zetsche, said his company will find refugee hostels for new employees.

Short-term peace and prosperity in the Middle East and Africa is a pipe dream. For some considerable time, Europe will be seen as a safe haven by many living outside its borders. Germany, in the heart of Europe, will become more multicultural and will have to cope with the many challenges of immigration as a result of people fleeing or those desperate to put food on the table.

The refugee crisis once again highlights Germany as the European powerhouse, for good and sometimes for bad, as many Greeks would say. Germany’s acquired status comes at a price: responsibility.

Opening doors temporarily will not be enough. Germany is also being asked to do more in conflict regions and to fight poverty and hunger worldwide, as Bodo Ramelow, prime minister in the federal state of Thuringia, said when he personally welcomed refugees arriving by train.

In the 1990s Germany, in collaboration with other countries, intervened in the Balkans to stop the crisis and an influx of refugees. As long as the displaced remained in Lebanon, Jordan, Turkey and Syria, from where most of the refugees hail, they were forgotten by German politicians and the bulk of the German population – a stance that led to the refugee crisis. Germany and Europe cannot continue to take this stance. We have been shown that desperate families, such as little Aylan’s, will risk everything in their quest for a life without fear.

Armin Osmanovic is the Rosa Luxemburg Foundation regional representative for West Africa and is based in Dakar. This article reflects his personal views