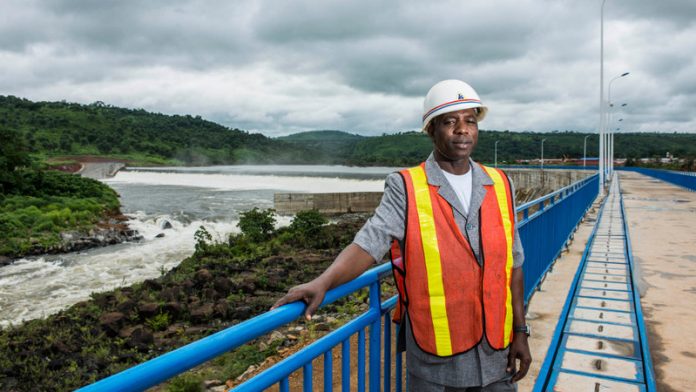 China International Water and Electric Corporation completed the Kaleta dam on budget and a year ahead of schedule in July, ending chronic power shortages in Guinea’s capital, Conakry. Construction continued even as companies, including London-based Rio Tinto and Luxembourg-based ArcelorMittal SA, paused projects in the region.

“The Chinese saved us,” Lansana Fofana said, as he stood on the $526-million hydroelectric dam that China financed and he oversees.

For Fofana, the 1 545m wall is a monument to the positive role China can play in Africa. In other parts of the continent, Chinese companies have been accused of treating workers poorly, building substandard infrastructure and damaging the environment.

“With Western companies, costs would have gone up and they would have walked out as soon as the first case of Ebola hit,” Fofana said as he walked beneath a buzzing pylon toward the roaring overflow.

“This gives us a real basis for our economy. Without power there is no development.”

China’s experience in other African countries, including Zambia where resentment against Chinese employers erupted into deadly protests, has prompted the government in Beijing to make a concerted effort to reach out to residents, according to Yejoo Kim, a researcher at Stellenbosch University’s Centre for Chinese Studies.

“They know about the outcry on the ground level and they are trying to rectify that,” she said. “The perception is slowly changing. It’s not going to happen overnight.”

Successful projects also help Africa’s leaders. The completion of Kaleta tripled Guinea’s electricity generation and gave many residents of the capital stable power for the first time in their lives, a dividend for President Alpha Condé, who faces re-election next month. Condé is so proud of the dam that he built a private residence next to it and promoted Fofana’s predecessor to energy minister.

At Kaleta’s official inauguration on Monday, Condé said in a speech to other heads of state that work on another, bigger dam just upstream will begin in a few months. Thirty percent of Kaleta’s output will go to neighbouring Gambia, Guinea-Bissau and Senegal, Fofana said.

“Before, we weren’t so understood,” said Allain Long, the deputy construction manager of the project, as he pointed to other Chinese buildings rising above crumbling low-rises. Long is one of a growing number of Chinese who speak French, the official language in Guinea and much of the region. “Now communication is much better,” Long said. “More and more Africans appreciate us. They can see that our work is helping them.”

Like the workers at Kaleta, Long stayed throughout the 20-month Ebola outbreak. Workers on projects owned by Rio and ArcelorMittal in Guinea and Liberia left.

In the north of the country, on a muddy river bank near Boke, a bare-chested Chinese worker operates a giant claw dropping mounds of bauxite, an ore that is refined into alumina and then smelted into aluminium, on to a barge.

Another man heaves rocks into a metal frame to weigh down a foundation for a new jetty. Building the port only took about eight months and allowed China Hongqiao Group’s project to start shipping in July.

Huddled under a makeshift shelter at the site’s entrance, a dozen Guinean men looking for jobs watch enviously as Chinese workers drive trucks and work on the road.

“It’s a bit of a shame,” said Sulei­man Kande (24). “We’re from here and don’t have jobs. The government should be controlling this.”

Still, the men said they have friends employed at the new port who are treated and paid well.

Back at Kaleta, Jiahua Liu, the top Chinese manager at the dam, offered a word of advice: build a relationship with the local residents at the beginning of any project.

“We built a mosque and a soccer field first,” Liu said from under a white hard hat. “We can see our efforts are appreciated here.”

When Ebola struck, Liu said he and his men stayed behind and helped deliver medical supplies and rice to local inhabitants.

“We were scared, but we stayed,” Liu said with a nervous laugh. “We had to do our jobs.” – © Bloomberg News