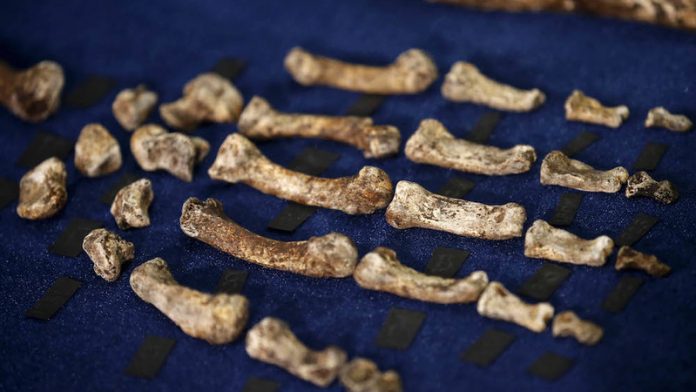 Busani Ngcaweni and Wonderboy Peters’s article Naledi is our spirit, not simply old bones may have the right overall message, but the facts given in the article, and the authors they name, are extremely dubious.

Ngcaweni and Peters themselves make some incorrect and inaccurate statements. First, the Piltdown Man was not created to “prove” that whites were in some way superior to other races at all; it was a hoax coming at a time when fossil discoveries were making big news around the world, and massive changes in the way people viewed biology, geology and the natural history of the world in general were occurring. The hoaxers latched on to this.

It was not an attempt to make black people seem inferior or for whites to feel superior; the article puts a spin on it that is absent from the historical record.

Cheikh Anta Diop’s work has been shown to be completely wrong. Diop made a whole raft of claims that have been shown to have been fraudulent, such as claiming to have developed a method of measuring melanin levels in burnt and decomposed corpses.

It was this method he claimed to have used when assessing Egyptian mummies. But this is not how postmortem racial identification works. In real life, it is done by comparing bone structures generally associated with different racial groups.

Melanin does not survive burning and does not get deposited in bones. The “billions spent on the Caucasian superiority project” were not needed to disprove Diop’s claims.

As for Martin Bernal, his Black Athena books have been thoroughly discredited. They have been shown to be nothing more than wishful thinking and shoddy scholarship. Likewise, Molefi Kete Asante’s writings are not accepted by most other scholars because they are really nothing more than pseudo-history.

The alleged Caucasian superiority project the authors invoke is a bygone part of the past. Nothing is going to change the facts. Unfortunately, Ngcaweni and Peters’s article is not much better than Mathole Motshekga’s paranoid conspiracy theories. – Martin Evans, Johannesburg

Communities have to reverse tide of rape

The article Diepsloot: Where men think it’s their right to rape, about the normalisation of rape in South Africa, made my blood run cold.

I cannot conceive how such a heinous series of acts can be perpetrated against women and children. It is clear that an abnormal situation has normalised itself with the complicit assistance of the state institutions charged with keeping citizens safe – or at the very least disincentivising the acts of rape and sexual misconduct that accompany daily life.

There is one fact that we can count on: nothing will change unless communities themselves take charge of this situation and reverse the tide of rape and general indecency. They first need to know what a normal condition is before they can do this and join forces with institutions and actors to effect the reversal of this social cancer.

There is still fertile ground for the replication of this most terrible destruction of the South African psyche. There are a number of papers describing the causes of rape, which range from unequal power dynamics, generational patterns of abuse, boredom, lack of morality, lack of self-esteem, the after-effects of structural violence, plain mental pathology, the built or “unbuilt” environment to subcultures of impunity and twisted masculinity (jackrolling).

These causes require the relevant stakeholders from the state, civil society, reputable faith-based organisations and the private sector to convene and to engage with communities on what is normal in a sexual relationship and the possible solutions to preventing these incredibly destructive behaviours.

Communities must take the majority of the responsibility to draft and implement plans to arrest this evil practice.

The after-effects for the survivors of rape live on long after the rapist is dead. Vulnerable communities must become intolerant of these heinous contact crimes. Rape is not something we should be conditioned to accept. – Justin Steyn

The allegation of “unethical academic citizenship and public debate” by the editor-in-chief of the academic journal Politikon, Joleen Steyn Kotze, (Join the debate on academics and the public), requires a response.

In the Debates section of Politikon, arguably an experimental grey space in academic publishing, the editorial team deemed itself exempt from stringent ethical academic standards by allowing personal correspondence of Steven Friedman and others to be quoted and referenced, despite these actions being unauthorised.

This correspondence, as well as that which I quoted from or referred to, was circulated and debated extensively among concerned people. At no point was it considered confidential. A blame game at this stage seems underhand and uncalled for. Furthermore, correspondence written expressly by someone in his or her “capacity as editor-in-chief” may be considered official rather than “private”. Be that as it may, the Press Code, which governs newspapers in South Africa, is clear: “News must be obtained legally, honestly and fairly, unless public interest dictates otherwise.”

The line on public interest potentially overriding requirements for legality, honesty and fairness is not found in this way in codes for academic research and publishing, and makes it near-impossible to gain ethics clearance for first-hand academic research on, for instance, corruption.

I argued at length in the Mail & Guardian (Journal publishes and is damned) that the matter regarding Politikon is in the interest of the public at large. – Marie Huchzermeyer, school of architecture and planning, University of the Witwatersrand

This correspondence is now closed. – Editor

"Mandela’s values were not confined to realising political freedom but included issues such as environmental justice."
Read more
Opinion

Our readers write in about election research
Read more
Opinion

Letters to the editor: April 26 to May 2

Our readers write in about the University of Cape Town, recycling and the South African Jewish Board of Deputies
Read more
Advertising
Continue to the category
Coronavirus