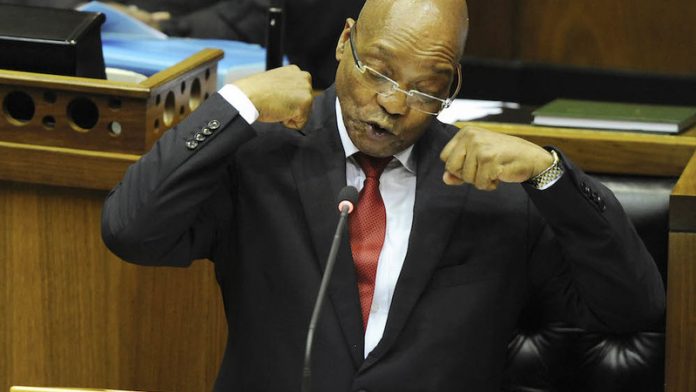 President Jacob Zuma has appealed to all companies – particularly those who do business with the state – to donate money to the ANC, warning that those who did not do so would be in “danger”.

He made the remarks while addressing international and local guests attending the ANC’s Progressive Business Forum gala dinner at Gallagher Estate on Thursday night ahead of the party national general council [NGC] which starts on Friday.

“I always say to business people that if you invest in the ANC, you are wise. If you don’t invest in the ANC, your business is in danger. The TG [ANC treasurer general] is a nice and a handsome young man. When he knocks, open the doors. If he says we need something he will ask one thing only. If he says support the ANC, just write a blank cheque with the instruction that it should be six digits, said Zuma.

He said while the ANC was a nonprofit organisation, it created business opportunities for companies. “This organisation does not make profit, but we create a conducive environment to those who make profit. Once you make profit, you know what to do.

Zuma’s statement comes in the face of criticism from opposition parties against the ANC after it emerged that Japanese conglomerate Hitachi agreed to pay a $19-million penalty to the Securities and Exchange Commission to settle charges of alleged corrupt payments to the tune of $6-million to the ANC’s Chancellor House to secure Eskom contracts to build power stations.

The NGC is the mid-term meeting held in between ANC conferences to evaluate the progress made by the party in implementing its resolutions. Earlier on Thursday, ANC secretary general Gwede Mantashe announced that the mid term review conference would be made up of 4 094 delegates of which 2500 were from branches.

The ANC in KwaZulu-Natal has the biggest delegation of 513 followed by the Eastern Cape which is due to have 403 delegates.  Mantashe said a proportionate system was used based on membership figures in each province.  “Other categories of delegates include the Leagues of the ANC, alliance partners, the NEC, PEC’s and REC’s and Umkhonto we sizwe Military Veterans Association,” he said.

Mantashe said ANC struggle veterans like Ahmed Kathrada and Andrew Mlangeni would also be present.  “As the tradition within the ANC, we have also invited fraternal organisations, notably the former liberation movements,” he said.

Mantashe said they also expect representatives from Brics embassies.  Mantashe said all delegates would be able to weigh in on the debates and the resolutions would reflect the views of ordinary members. Zuma was expected to deliver his political report on Friday.