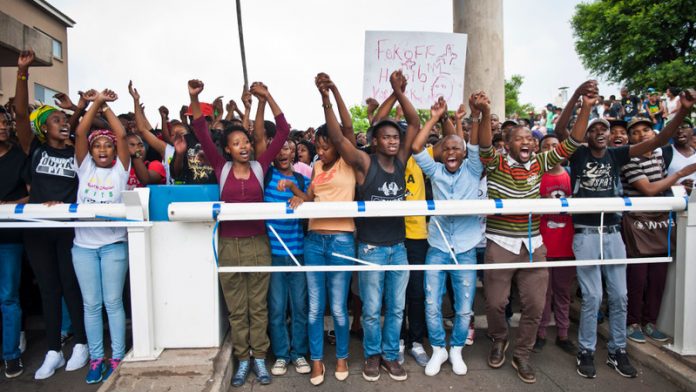 “Council will not engage with students in Senate House. Council has instructed Wits University’s executive management to clear and secure Senate House today by 15:00,” the university said in a statement.

“Staff and students are therefore requested to leave the building immediately.”

The students, however, remained steadfast, and sang against Vice Chancellor Adam Habib and the institution’s council. They vowed to continue protesting until their demands were met.

The university released the statement after lunch while students waited for management to address them. The council had been set to give feedback on a proposed 2016 fee hike by midday on Monday.

Protesting students, supported by a number of university staff, had filled up the Senate House in anticipation of the feedback by university management. Some staff members held up placards calling for the cancellation of proposed 10.5 percent tuition fee increase for 2016.

“The plan was to meet here at 12:00 … but where are they, comrades? We are not going anywhere, we are not moving,” Wits SRC outgoing president Shaeera Kalla has said earlier.

There was no police personnel present at the campus.

Earlier on Monday, Wits students took to the streets in Braamfontein to intensify their demand against the proposed 2016 tuition fee increase. They marched peacefully, singing revolutionary songs, as they made their way through Braamfontein’s streets.

Led by leaders from most political formations at Wits, they held sticks high in the air and screamed: “No to fee increase!”

The students were protesting against increased 2016 tuition fees, and lectures at the university remained suspended on Monday.

Late last week students protested for three days. The students began protesting by shutting down the Braamfontein campus. They demanded that Habib respond to their demand of no fee increase, arguing that the proposed 10.5% increase was not affordable.

Friday saw Habib and members of the executive council surrounded by protesters and locked in until Saturday morning at Senate House. The students would not back down and demanded that top management hold a meeting and accede to their demand.

Eventually, an agreement was signed on Saturday between the students and the council, led by its chairperson Dr Randall Carolissen.

The parties agreed to suspend the 10.5% proposed tuition fee increase for 2016 and that the negotiations on fees start anew.

They agreed that there would be no disciplinary action against students and workers who participated in the protests.

The council, which held a meeting on Sunday, was expected to report back to students on its way forward at midday on Monday.

Meanwhile, students at Stellenbosch University and the University of Cape Town, both in the Western Cape, also began protesting Monday against proposed fees hikes for next year. Students at Rhodes University were also protesting over the same matter.

The university plans to teach online as South Africa’s lockdown continues, and is offering zero-rated data for its teaching sites, as well as computing devices for students
Read more
Education

While life goes on for the students at UniZulu, may they spare a thought for Ndumiso Ntsele whose only sin was to try to make an honest living in tough economic times
Read more
Special Reports

The verdict highlights a number of critical issues required to build systems, processes and advocacy when it comes to working in the space of gender-based violence
Read more
Advertising
Continue to the category
Politics