Kaboom shots! Girls can rap too 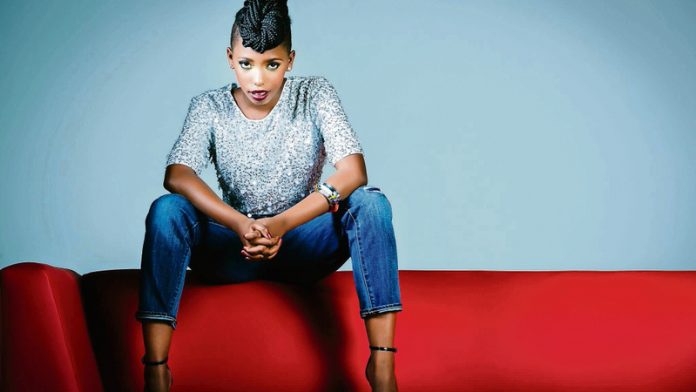 ‘If there’s any female rapper that can do it better than me, I owe you 10 grand, yo!” said an animated Gigi Lamayne during a pre-performance interview at Johannesburg’s Maftown Heights in December. “Even male!” interjected Thabo, a member of Gigi’s dance crew, Supreme I.

Lamayne stared right into the camera: “If there’s any male rapper who thinks he’s better than me today, you need to bring it. Kaboom shots!” she said – twice – before adding: “Supreme!” with both hands cupped around her mouth, as if hollering at someone.

Lamayne is at the forefront of what appears to be a new wave of women dominating the South African hip-hop landscape. Her most recent single, Ice Cream, the remix version of which featured Khuli Chana, has done well on national radio since its release earlier in the year.

She’s also more visible; the gigs flow in regularly. This is due, in large part, to the Dream Team talent agency’s involvement in her career.

“I wanna see myself get to a point where I’m competing with the guys … I feel like it’s my time,” she said at the time, referring to her 2013 and 2014 wins in the Best Female category of the South African Hip-Hop awards.

She was alluding to a male-dominated industry that sees it fit and normal to create the label “femcee” to define a female emcee, and allow it to flourish.

As Andy Mkosi, a Cape Town-based rapper, photographer and cohost of the Headwarmaz show on community radio station Bush Radio, puts it, the term “is shit”, as it creates an imagined category within the emceeing realm.

Mkosi, who’s just released a collaborative EP with her Headwarmaz cohost, rapper and writer Sabelo “Sabza” Mkhabela, hot on the heels of her debut EP, iPressure, believes that the term is condescending. “It’s almost like people who use it are shocked at the skill females have, therefore they feel the unnecessary need to put it forward before anything else.

“It shines a light on a stupid thing – a ‘why do you have to acknowledge my boobs and vagina before my skill?’ type of thing,” she says.

There was a collective South African hip-hop tongue-lashing directed at Hype magazine after it put rapper Supa on its cover 10 years ago. Many said that she didn’t deserve the honour because she had no album to her name.

“Had it not been for me on the cover of Hype, we would never have had a [South African] female rapper on the cover.

“And to this day, people are still not finding anybody deserving, and there’s a lot of people that deserve,” she says in The Capacity of Cap City, a documentary about Pretoria’s hip-hop scene directed by filmmaker Sara Chitambo.

Yugen Blakrok is one of those who is worthy. From grinding in rap cyphers during her days at Rhodes University to performing for discerning audiences who rap along to the outer-space ruminations of her debut album, Return of the Astro-Goth, on big stages and in intimate settings, the Queenstown-born, Jo’burg-based emcee not only has stories to tell, but also the track record and battlefield scars to be a contender.

“I ignore the shit out of them” is her answer to how she responds to being called a femcee. She does acknowledge that some people have the decency to ask beforehand whether she’s comfortable with it.

“I’m not fond of the term. I think more people use it subconsciously than consciously,” she says. “Whenever someone approaches me that way, they’re just exposing a lack of awareness on their part. I don’t feel affected. I don’t feel like I should be angry … it’s your mind that operates on that level.”

Lesotho’s Boitumelo Lofafa embraces the moniker. “I am a female emcee, but my mission is to take women back to the days of intellectual conversations communicated through rhyme,” she says.

Lofafa – rap name: Meloh D – of the Reggae Vybz collective, whose head-nodding song Soul Riddim is reminiscent of the now old school when Queen Latifah and Lauryn Hill were active in the raposphere, wants to reimagine the “femcee” as a millennial with a tinge of hardcore realness and none of the fluff associated with mainstream representations of women in rap music.

“[I want to] remind women that their power lies in the mind, not the body – mainly breast, ass and vajayjay,” she says.

It’s a sentiment shared by Zimbabwean-born rapper Radiofien. Speaking in an interview with the African Hip Hop Blog, she said that it’s redundant to rely on sex appeal to compensate for below-average rap skills. “Female rappers need to bring the heat lyrically first, before they turn to being ‘hot’ in videos,” she said.

“Let’s give the boys a run for their money; let’s blur the lines between male and female rappers and make it fair game. Let’s not short-change ourselves by relying on booty shorts to sell us. I plan on going hard like I’ve always done, not relying on my femininity.

“I don’t look at my gender, because hip-hop is not about gender but intelligence. It’s not about your DNA, but how skilled you are at stringing words through a beat.”

Mkosi says it’s up to women in rap to create spaces for themselves outside the mainstream gaze. As she sees it, the avenues where women are allowed to speak feel like tokens – where being female as opposed to being skilled becomes the selling point.

Gigi Lamayne appeared on national television recently for an interview and performance of her current single, Jungle Fever, backed by two members of her dance crew plus her deejay.

It was evident that she exudes the charm and self-belief to counter all unbelievers. This is in line with her words when we spoke: “I am the last female to be [destroyed]. I am too hungry to let anything get in my way.”