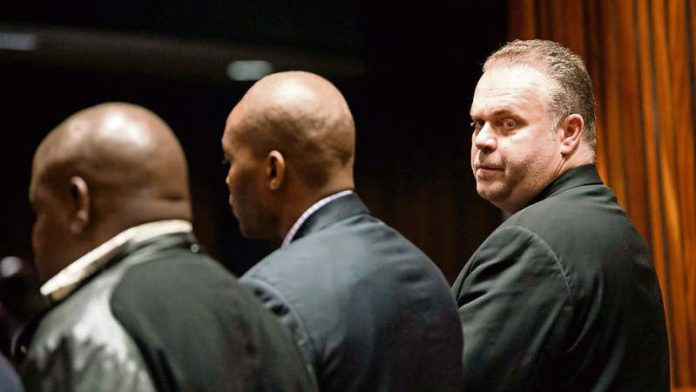 Krejcir and five others were found guilty of kidnapping, attempted murder and attempted possession of drugs in August.

On Wednesday, defence lawyers told the court that Krejcir and the other accused needed “correctional supervision reports” prior to sentencing. The court had not yet ordered the social worker reports, the lawyers said.

Visibly irritated, Judge Collin Lamont said this was the last time he would postpone sentencing. “I’ve been trying to sentence them for long now and yet again there are issues, the accused should know that there comes an end to applications of postponements,” he said.

Since being found guilty and while awaiting sentencing, prison authorities have uncovered at least one Krejcir escape plot. A gun and cellphones were among the items recovered from his cell.

An estate agent was arrested and later released on bail this week after she was caught trying to smuggle in a cellphone for Krejcir. She was let out on R3 000 bail.

In court, a number of armed police ensured there was no chance Krejcir could escape.

Lamont, apparently concerned about security regarding the convicted Czech, asked state prosecutor Lithabo Mashiyane if the accused were still being treated as prisoners awaiting trial.

“They still fall under awaiting trial prisoners and still have all the privileges,” Mashiyane said.

Lamont said such privileges allowed the accused access to the outside world and possibly gave them time to make nefarious plans.

The judge said the postponements were a huge security issue and impinged on everyone’s rights.

The defence team said the necessary reports from social workers would only be ready on November 17 and Lamont said sentencing would commence on that day. – ANA