Turkey election: Erdogan and the AKP get majority back amid climate of violence and fear 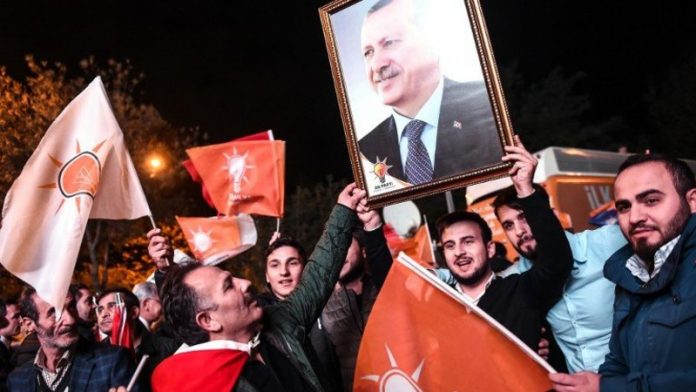 Turkey’s president, Recep Tayip Erdogan, appears to have strengthened his grip on the country after the Justice and Development Party (AKP) won an outright majority in a snap election just five months after an inconclusive poll. It is a result that will shock and frighten many in the country.

This result is a big surprise, since pre-election polls forecast a result not much different from that of the June election – and it undoubtedly owes a lot to the toxic atmosphere in which the election was held.

As reported widely around the world, the campaign was anything but fair. The AKP not only controls the army, but also holds sway over the judiciary and much of the media. The party and President Erdogan effectively dominated pre-election airtime on the country’s public broadcaster, the Turkish Radio and Television Corporation (TRT), which once again displayed blatant favouritism toward the government and Erdogan.

More worryingly still, reports are circulating of vote-rigging. The news agencies announced the results very rapidly. The election was called for the AKP within only a few hours, despite the fact that many votes were not even delivered to the counting boots. Social media was abuzz with allegations of election fraud, as angry Turks documented their claims with photographs and videos.

A delegation from Greece that was watching the elections was detained in Istanbul on the day of the vote, heightening the general atmosphere of tension. And people who live in Kurdish majority areas had to vote amid a heavy police presence.

Presidential system
Many observers are convinced that one of the fundamental reasons Erdogan called this snap election in the first place was to restore the AKP as the single ruling party, which will enable him to change the regime to a presidential system and strengthen his position.

Turkey has been through turbulent times in between the two elections. According to official records, more than 700 people have lost their lives in political violence since June. The Kurdish peace process has collapsed, and the clashes between the PKK and the Turkish Army have restarted.

There have also been two suicide attacks. The first, in Suruç, near the Syrian border, killed at least 24 people and wounded nearly 100 more. Then there was the bombing of Ankara’s central railway station on October 10, which killed 102 people and injured more than 400 – the deadliest terrorist attack in Turkey’s history. The bombs appeared to have targeted a “Labour, Peace and Democracy” rally organised by opposition parties and leftist groups.

No organisation has yet claimed responsibility for either attack, but the AKP government has tried to associate both with the PKK and other anti-government organisations, albeit with no evidence or proof.

Besides the Kurds and the leftists, the AKP has targeted other groups. Its relationship with the Hizmet Movement, a global faith-based civic network, fell apart in late 2013 after the Erdogan government began raising disturbing concerns about its involvement in a “parallel state”, a supposed shadow “fifth column” controlled by the movement. Since then, the AKP government has been clamping down on Hizmet-connected media groups and businesses.

Ominously, that crackdown has begun to extend to the wider media. After the June elections, several newspapers were taken over by government-appointed trustee boards. These events have drastically eroded Erdogan’s international support – the Economist went so far as to publish an article explaining why Erdogan should leave, calling him “the sultan at bay”.

The devil they know
Turkey may no longer be saddled with an uneasy coalition government, but the intense polarisation the AKP has caused will not be resolved any time soon. During the last few months, the AKP was skating on thin ice, working hard to poach votes from the MHP by creating a paranoid atmosphere of violence and authoritarian crackdowns. It has been brazenly trying to turn Turkey into a police state, one where the opposition has no room to breathe and where religious and ethnic tensions deepen every day.

It seems this strategy has worked. People turned to the devil they know; even with an ever-quickening slide towards dictatorship underway, most voters probably just wanted to end the uncertainty that’s gripped the country for so long.

Now there are big questions to answer. It remains to be seen how well the AKP and Erdogan can actually govern a society as deeply divided as Turkey is now, and just how harshly they are prepared to treat opposition in the name of stability.

On the other hand, now Erdogan and the AKP have what they wanted, perhaps they’ll finally see sense, tone down their rhetoric and pick up the Kurdish peace process once again.

That may be a futile hope – but at least Kurdish voices have not been completely shut out of politics. Even with the AKP riding high, the relatively young HDP is still going to have an opposition presence in parliament, and it’s now the third-largest party in terms of MPs. That gives it a great chance to and grow its voter base to gradually become the strongest opposition party by the next elections.

As things stand, the HDP is now the biggest challenge to Erdogan’s authoritarianism – a crucial role. Selahattin Demirta?, the party’s co-leader, sent a strong message to the country during his election night speech: “No need to be afraid. We are here and we will keep resisting together.”