Workers seethe over ‘Oz mine bully’ 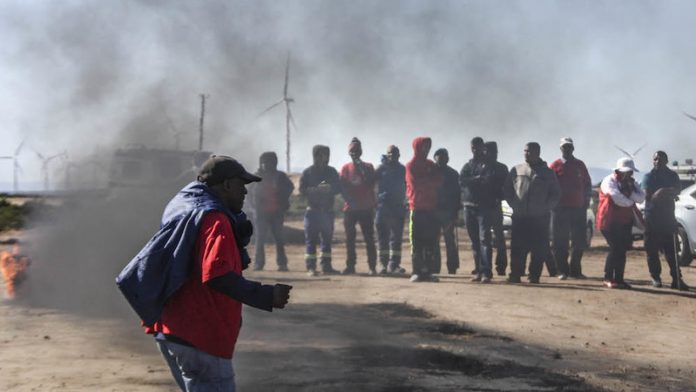 A gyrocopter flying over the Tormin mineral sands mine near the West Coast town of Vredendal was shot at on the orders of the company’s general manager, a witness said.

The alleged incident took place last month and was reported to the local police. The witness said Gary Thompson ordered his bodyguards to open fire on the aircraft. If it is true, the allegation suggests a siege mentality at the West Coast dune-mining operation, owned by Mineral Commodities (MRC), an Australian company that is also at the centre of the long-running battle over planned dune mining  at Xolobeni on the Eastern Cape’s Wild Coast.

Weeks of labour turmoil at the Vredendal mine on the arid coast 400km north of Cape Town started when workers launched a five-week strike on September 4. Tormin hit back with a lock-out, coupled with its own conditions for a return to work.

Police allegedly fired teargas during a protest by strikers outside the mine and arrested 27. After the return to work, 25 were suspended on charges including “participating in actions detrimental to the interests of the employer” and “bad-mouthing the company”.

Some workers then marched on Tormin to present a memorandum of demands, including Thompson’s “immediate dismissal”, but say no one emerged to accept it. Four armed security guards stand at Tormin’s entrance.

During an unscheduled visit to the mine last week, an amaBhungane reporter asked to speak to management, but they turned her away. Asked about workers’ allegations against Tormin, the company’s  public relations consultant, Anne Dunn, described them as incorrect and groundless.

“Tormin does not wish to debate this issue in the media and will not be providing comment.”

Responding to a specific question this week about the shooting claim, Dunn said Tormin did not wish  to comment. The witness, a mine employee who asked not to be named, said the shooting happened at about 1pm on October 14.

“A helicopter was flying over the mine and Gary [Thompson] went outside with two of his bodyguards.

“Next thing he shouted at the bodyguards to fire at it. Two shots were fired, but they missed and the helicopter flew off. Then they went back to the plant and acted as if nothing had happened.”

The witness said she reported the incident to the police on the  same day, “but till today I have heard nothing”.  She said she had received a formal letter from the mine calling her to a disciplinary hearing, which she believes relates to an email she sent about the shooting incident.

“I did indeed send an email that day to my husband informing him of what happened,” she said. The company’s letter, which amaBhungane has seen, states that “the purpose of the hearing will be to determine whether you are guilty of … disclosure of confidential information to unauthorised persons through email; in the alternative, any conduct which affects the employee relationship adversely”.

The Western Cape police spokesperson, Frederick van Wyk, confirmed that a gyrocopter had flown over the mine and an allegation of shooting was under investigation. No arrests had been made. Although the mining of zircon and other minerals started in early 2013, Tormin was officially launched last year ago at a ceremony attended by Mineral Resources Minister Susan Shabangu. An upbeat Shabangu welcomed the investment and “the demonstration of sustained confidence in the South African mining industry”.

But the optimism has soured. Workers interviewed last week were seething with resentment against the company and accused Thompson, who took over in mid-2014, of unfair dismissals, racism and the “oppression” of employees. They said the legal strike, involving many of the 250-strong workforce, was triggered by wage cuts issued without notice.

A suspended plant operator, who did not want to be named, said: “The cuts were done in consecutive months: June, July and August. I was earning R26.75 an hour, which was reduced to R26.50. Bear in mind that you only get paid for the hours you work.” At the air-conditioned municipal offices in scorching Vredendal, amaBhungane attended a meeting of suspended miners, National Union of Mineworkers (NUM) members, a ward councillor, the local taxi association, community members and the ANC Youth League.  A Tormin employee said he started working at the mine in 2013 and does a 12-hour shift.

“Everything was going good before the current people took over. We’re mistreated at the mine. The general manager, who is 68, swears at us and makes sexual comments to women employees. Accidents with transport at the plant are not reported  or investigated.

“Gary is not afraid to tell us that, if you go inside the mine gates, you’re in Australia and, if you leave, then you’re in South Africa.

“The high-paying positions depend on who you are and how you look,” the employee said. “I have heard him say that, if you’re a baboon, you’ll  get a job at the plant. Some people don’t even have grade 10 but are made supervisors.”

Davine Witbooi, a local activist and small farmer from nearby Lutzville, leads amaBhungane through the dirt roads to her shack in Mbeki Square. There she tells us of residents’ fear of taking on mine management.

“People are scared of Gary Thompson and they want him to go back to Australia,” she said.

Workers claim their attempts to speak to the company’s boss, Mark Caruso, outside the Cape Town high court on October 9 underlies some of  the suspensions. The court case revolved around claims by the former chief executive, Andrew Lashbrooke, that his  company lent MSR money in exchange for the exclusive supply of minerals from the mine. His application was dismissed. According to the quarterly activities report of Tormin’s parent company, Mineral Commodities, for the period ended September 30, the NUM “received recognition amongst the Tormin workforce [in July 2015] and subsequently made a series of unrealistic demands”.

It said talks deadlocked and the strike erupted after the company offered an effective 33% pay rise. The report says “a core group of nonunion members continued to report for work and support the company’s mining processing operations … The majority of workers, union and nonunion, had returned to work by the end of September, accepting the company’s employment conditions and terms.” But Dick Forslund, a senior economist at the Cape Town-based Alternative Information and Development Centre, said, after seeing the company’s return-to-work conditions, that he had advised the Vredendal NUM “that the agreement was unlawful and does not  bind them”. Forslund said the agreement involved many violations of the Basic Conditions of Employment Act.

One of the workers’ demands is that Tormin must “respect South African legislation”. The principal breach, Forslund said, was in relation to a four by four by four shift system — four 11-hour day shifts, followed by four night shifts, followed by four rest days. This amounted to about 220 hours a month over every even number of months, a 25-hour increase over the previous contract and more than the 189 hours set as the upper limit by the legislation. He added that the Act stipulated a maximum of five hours’ overtime a week, but Tormin workers had worked an average of 7.3 hours over a two-month period.

Meanwhile, the company has announced it has started work on a R2-million resource centre at Lutzville’s Koekenaap School that will be handed over in January  next year.

Representatives of the Amadiba community in the Eastern Cape have accused the Australian company Mineral Commodities (MRC) of lying to its shareholders.

The Amadiba crisis committee is leading local opposition to attempts by MRC, through its South African partners, to mine heavy minerals at Xolobeni in the Bizana district.

In its mid-year report to shareholders, MRC, which is listed on the Australian Stock Exchange, said “good progress” had been made on the ground at Xolobeni between those for and against the mine. After meetings between the crisis committee and those in favour of mining, a “steering committee” was formed, “which has allowed a peaceful and co-ordinated access for consultants undertaking public participation processes. The steering committee will meet regularly to deal with all aspects of the mining right approval process that affects the community,” said the report.

But the crisis committee, which has been described by MRC as “a violence-prone, nonresident, anti-mining group” that “has been instigating trouble in the local community”, said this is false.

Committee members Nonhle Mbuthuma and Mzamo Dlamini said the MRC is misleading its shareholders. There is no “steering committee”, they said, and no access has been granted to the land for an environmental impact assessment. In fact, when environmental consultant Piet Badenhorst asked for access at a meeting with 200 residents on October 20, he and his specialists were “politely asked to leave”, they said.

Mbuthuma and Dlamini quoted a 2014 report by the Eastern Cape economic development department, which found surrounding communities were unanimous in their opposition to the mine, as it destroyed any prospect of environmental tourism in the area.

MRC is the parent company of the Tormin mine on the West Coast. — GroundUp Reporter