Cops light up for Hlaudi 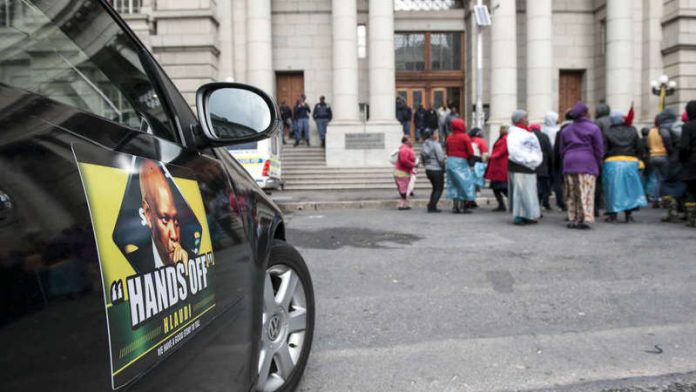 When the SABC’s chief operating officer, Hlaudi Motsoeneng, travelled to Bloemfontein to appeal a court order that the SABC should suspend him and institute disciplinary proceedings, his legal counsel were amused by the unexpected traffic police cavalcade that accompanied them from a hotel to the Supreme Court of Appeal.

Another large traffic police cavalcade was laid on to take all the legal teams from the court to the airport on that eventful day, September 18, the Mail & Guardian has established.

And though Motsoeneng was not spotted in the convoy, he declined to comment on whether he knows who arranged the official escort for all the legal teams in Bloemfontein.

The public broadcaster’s top executive, who has now taken a leave of absence from his post, told the M&G he just wants to focus on his SABC disciplinary proceedings, scheduled to continue in December.

Judging by the travel arrangements on the day of his appeal court hearing, it would seem that Motsoeneng’s power base is undiminished, despite public protector Thuli Madonsela’s finding in her report When Governance and Ethics Fails that he lied about having a matric certificate, and that his appointment as acting chief operating officer and his salary hike were both irregular.

At Motsoeneng’s court appearances during the Democratic Alliance’s protracted legal battle to try to have Mandonsela’s recommendations enforced, crowds rallied to support him. Outside the high court in Cape Town, members of Ses’khona People’s Rights Movement arrived in buses and danced and sang in his honour, some carrying posters reading: “Hands off Hlaudi.”

Senior advocate Norman Arendse SC, who represented Motsoeneng in the appeal, said that most of the counsel and attorneys stayed at the Tsogo Sun in Bloemfontein, but he had booked in at another hotel. On the morning of the hearing, the legal counsel gathered at the Tsogo Sun hotel, and it was there that they were surprised by a traffic police cavalcade that arrived to escort them to the appeal court.

“We were told the reason was expected crowd congestion around the court,” Arendse told the M&G. “I drove my own car rental with my junior. I didn’t see Hlaudi.”

Similarly, after court, Arendse said, all lawyers drove behind a traffic police cavalcade, consisting of vehicles and motorcycles, to the airport.

Again, Motsoeneng himself was not spotted in any of the vehicles being escorted, nor was he seen at the airport.

The legal team had been “quite amused” by the traffic arrangements but had no idea who had made them, said Arendse.

“It did not strike any one of us as lawyers, on both sides of the case, as unusual because there did appear a much higher volume of traffic that day in the morning and the afternoon, as the case appeared to attract higher than usual public and media interest,” said Arendse.

‘No special attention’
Qondile Khedama, the spokesperson for the Mangaung Metropolitan Municipality, said the council had not provided an escort for Motsoeneng or his legal team and its intention is always to manage a situation where people are expected to assemble in numbers.

“With regard to the case of Mr Motsoeneng, the same principle applied. We haven’t provided any special attention, neither have we provided an escort to that effect. This is a case that has been treated like any case by Mangaung Metro Municipality and no escort was provided for him or his legal team,” said Khedema.

“Our attention was specifically focused on parking around the court precinct. Our understanding in such situations is that traffic flow must be regulated and people must not be inconvenienced in such places where there are lots of civilians attending.”

Free State Premier Ace Magashule and the provincial government said the M&G questions about whether Motsoeneng was given a blue-light traffic escort by the provincial administration were “unfounded”.

“We are not aware of any ‘blue-light’ traffic escort provided to Mr Motsoeneng or any other individual, except for the premier and members of the executive council,” said Tiisetso Makhele, the premier’s spokesperson.

‘Appoint him because Baba loves him’

Who laid on a traffic police escort in Bloemfontein for Hlaudi Motsoeneng’s team remains a mystery, but that he received such treatment comes as little surprise in the context of recent history.

In recent months the SABC board chose to ignore the public protector’s adverse findings against Motsoeneng, and Communications Minister Faith Muthambi endorsed his permanent appointment shortly after the release of the damning report.

But perhaps most telling is the allegation that Muthambi told dismissed SABC board member Hope Zinde that she should vote for Motsoeneng to be appointed to a permanent post because President Jacob Zuma “loves him”.

In a letter to Parliament’s portfolio committee on communications, seen by the Mail & Guardian, Zinde wrote that Muthambi had said to her: “But Baba loves him‚ he loves him so much. We must support him.”

Although the Supreme Court of Appeal later dismissed Motsoeneng’s appeal against his suspension and upheld Thuli Mandonsela’s recommendations, his disciplinary hearing was suddenly put on hold when it began on October 30.

Motsoeneng has been charged with gross dishonesty and abuse of his position, and his lawyer, Zola Majavu, said the hearing will now take place between December 1 and 4. This was decided after a meeting with advocate William Mokhari, who will chair the hearing.

Following the postponement, the SABC reported that the public broadcaster needed more time to access the documents the public protector used to come to her findings in her report.

Yet Madonsela’s office said it had not been contacted by the SABC. “We are not aware of any such request,” said public protector spokesperson Oupa Segalwe. And, he pointed out, the documents and evidence that the public protector relied on to make her findings are primarily from the SABC itself.

Untouchables with a mighty God complex

Under President Jacob Zuma, South Africa has seen a growing list of untouchable leaders, both in government and in public institutions.  Seen as a Zuma ally, the SABC’s Hlaudi Motsoeneng brazenly opted for “voluntary leave” after the Supreme Court of Appeal ordered his suspension, pending a disciplinary hearing.

Political analyst Aubrey Matshiqi says the arrogance that exists among people in power can be attributed to a variety of factors. “It is a combination of politicians and government officials who have a God complex,” he said, “and the fact that our political class seems to be out of touch.”

The impunity that leaders like Motsoeneng appear to enjoy is another factor. “It is mainly, not exclusively, a function of uncompetitive electoral politics,” said Matshiqi. One party is dominant for too long, and some of its members labour under the illusion that it will be in power for ever, he explained. “So both the party and the members at some point in their minds become untouchable.”