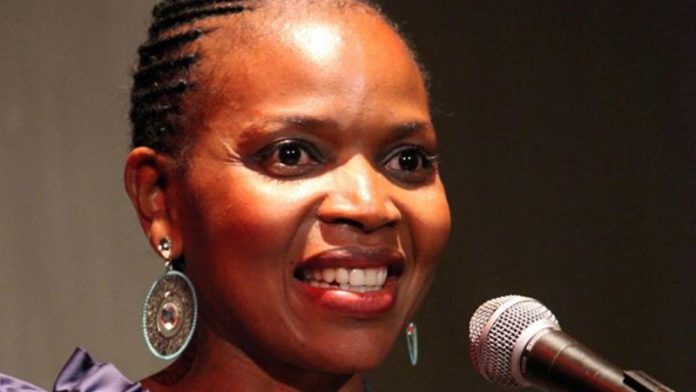 South African actress Florence Masebe’s birthday celebration on November 14 ended tragically when her 18-month-old son drowned in their swimming pool in Johannesburg, Channel24 reported. Messages of condolences have started pouring in on social media for Masebe, who has starred in TV shows Soul City and Generations, as well as in the first Tshivenda film, Elelwani. According to Sowetan the child was certified dead at the scene. Masebe often shared snaps of her son on Instagram and tweeted about him. She has two other children aged 19 and 12.

May the good Lord comfort Florence Masebe and her family in these trying times. She has been through a lot, I pray the Lord strengthens her

Heartfelt condolences to Florence Masebe and her family on the loss of her son. May the good Lord carry her through this difficult time

Nigerian rapper Davido (born-David Adeleke) and his manager were robbed on November 13 shortly after landing at the OR Tambo airport in the evening. The rapper was robbed of cash amounting to $55 000 while his manager was robbed of a Rolex watch. Explaining the robbery on social media, the Naughty hitmaker explained that he still has love for South Africa and that, from now on, not a day would pass without him praying to God. On Snapchat, Davido could be seen pulling out his chains and bragging that his assailants never managed to get the jewellery.

Dem niggas got me for 55 thousand dollars cash !! Crazy!!!

Sources close to 5FM newsreader Carmen Reddy say she is in a stable condition, after she was shot in the shoulder during a house robbery on November 11 in Centurion,  Channel24 reported.

Reddy, who is part of DJ Fresh’s breakfast show team on 5FM, was celebrating Diwali with her mother, colleague Vic Naidoo and 94.7’s Aurelie Kalenga when five men invaded Reddy’s home. According to the Citizen, Naidoo was in the open-plan kitchen area with Reddy and the other two women when Reddy’s mother first saw one of the men, who was then followed by four more who came out from a guest room.

“Carmen’s mom tried to move the gun because it was pointed at her kid, the guy then hit her. The next minute I heard a gunshot and I was on the floor, and all I could see was blood,” Naidoo told The Citizen. The intruders took Naidoo’s phone, but didn’t steal anything else in the house.

DJ Sbu to set a new world record with Mofaya

Radio personality and entrepreneur DJ Sbu (born Sibusiso Leope) is back in the spotlight with his energy drink, Mofaya. Leope, along with Doves Funerals, will attempt to set a new world record for the most cans opened simultaneously on November 21 at Maponya Mall in Soweto. The plan is to have 10 000 people opening 10 000 cans of Mofaya at the mall. It’s been months since DJ Sbu made headlines for his energy drink venture, which has in the past landed him in hot water with his previous employer Metro FM, Forbes Africa magazine and the South African Bureau of Standards (SABS).

To register for the world record visit  doves.co.za

A Tribe Called Quest reunited this weekend for a performance on Jimmy Fallon’s The Tonight Show. The iconic hip-hop group was performing in celebration of the 25th anniversary of their debut LP People’s Instinctive Travels and the Paths of Rhythm.

According to Fact Mag, A Tribe Called Quest broke up in 1998, but have occasionally reunited for primarily one-off performances. In 2008, they headlined Rock The Bells, an appearance whose tumultuous post-concert scenes were filmed as part of their documentary Beats Rhymes and Life. In 2013, they performed on Kanye West’s Yeezy Tour.

The performance on November 13 was on the same day as the reissue of their 1990 debut album People’s Instinctive Travels and the Paths of Rhythm (which turned 25 this April). The album is also the subject of a pocketbook by Shawn Taylor.

A class photo and an us that never was

"I should have said it out plainly on that lunch break: she’s actually fucking beautiful, you numbnuts."
Read more
World

What Phife taught me

Tribe fans Ofentse Mboweni and Luke Feltham revisited some of their favourite lines to reflect what these mean to them.
Read more
Friday

‘Elelwani’ in the race for an Oscar

SA's first Tshivenda film is heading to the Oscars, and if it wins, it will join the ranks of 'Yesterday' and 'Tsotsi'.
Read more
Friday

‘Elelwani’: An insight into Tshivenda culture