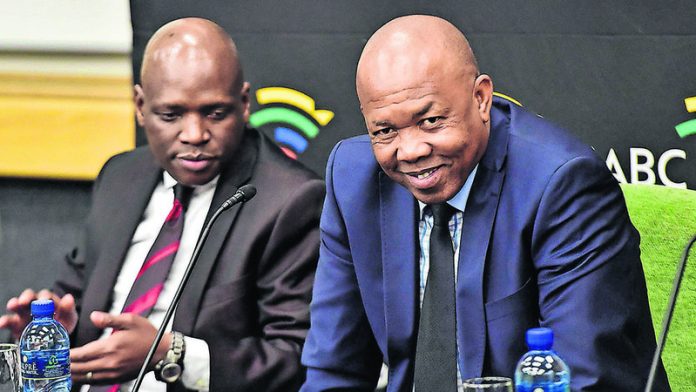 The disciplinary hearing of the SABC’s chief operating officer, Hlaudi Motsoeneng, has become mired in controversy after the prosecutor hired by Communications Minister Faith Muthambi was abruptly dismissed from his role this week.

A labour law specialist, attorney Sandile July, was the prosecutor when Motsoeneng’s hearing opened on October 30, and he attended a pretrial meeting with the legal parties involved in the hearing on Monday this week.

But shortly after the meeting, July received a letter from the chairperson of the SABC board, Professor Obert Maghuve, informing him that his appointment had not been “regularised”. Maghuve wrote that, since July had not been properly appointed, he should cease his work at the hearing.

The attorney’s surprising dismissal has given rise to suspicions that it could be linked to the relief July would seek if Motsoeneng was found guilty of the misconduct charges brought against him: July indicated that he would call for the powerful SABC boss’s dismissal.

July, a director at the respected law firm Werksmans Attorneys, could not be reached for comment. But it is believed the attorney had previously outlined his concerns to Maghuve about whether his appointment had been regularised by the board. July had asked that an SABC board meeting be called to appoint a member to liaise with him over the disciplinary hearing.

Legal sources say the issue surrounding July’s appointment could easily have been addressed if this had been done.

Maghuve was one of the board members who voted in favour of Motsoeneng being appointed to a permanent position in July last year, despite the public protector, Thuli Madonsela, having recently found in her report, When Governance and Ethics Fail, that he had lied about having a matric certificate. Although Madonsela declared his appointment as acting chief operations officer and his exceptional salary hike at the time was irregular, Motsoeneng was inexplicably promoted by the board to a permanent position.

The promotion was endorsed by Muthambi, who is an active Motsoeneng champion. The SABC group chief executive officer, Frans Matlala, who was himself suspended this week, was Motsoeneng’s line manager, and he was expected to have become involved in overseeing his disciplinary hearing.

Sandile July was to have prosecuted in Motsoeneng’s hearing. (Daily Sun)

The appointment of both the chairperson of the hearing, William Mokhari, and July was made by Muthambi. According to a board document, dated October 14, Motsoeneng and eight other board members were asked to ratify Muthambi’s appointment of Mokhari and July in a “round robin” request they were sent and asked to sign. Two days later, Motsoeneng took a “voluntary leave of absence”, pending his hearing.

“In order to ensure the independence of the board in this matter, a request was submitted to the honourable minister to appoint an independent chairperson and pro-forma prosecutor in respect of the intended proceedings against Mr GH Motsoeneng,” the company secretary, Theresa Geldenhuys, stated in the letter to board members.

“In view of the urgency of this matter, you are hereby requested to ratify the two appointments on a round robin basis.”

The prosecutor’s concerns that he had not been properly appointed appear to have been based on a Supreme Court of Appeal judgment handed down in October, which dismissed Motsoeneng’s appeal against his suspension and upheld the recommendations made by Madonsela.

July is understood to have been concerned that the court had not ordered that the minister, who is the shareholder’s (government) representative, should become involved in Motsoeneng’s disciplinary hearing, which is an operational matter. The SABC and Muthambi’s media liaison representatives declined to comment on July’s dismissal, but the controversy will cast a pall over the hearing, which formally gets underway again in December. It is not known yet who will be appointed to replace July.

A Democratic Alliance MP, James Selfe, said his party was keeping a close watch on the hearing, after it had waged a battle in several courts to ensure that the public protector’s recommendations on Motsoeneng were enforced.

“We have been concerned for a long time that this disciplinary could land up as a farce. And because of that, we have been engaging with the attorneys of the SABC and with the chairperson to ensure that the timetable is adhered to and that the disciplinary inquiry is meaningful,” he said.

“We are deeply suspicious and will continue to engage in this process, because, if what it turns out to be is some sort of whitewash, then we will have no hesitation in going back to court and seeking a contempt order.”

It is a poisoned chalice that former banking executive Frans Matlala must have known he was accepting when he stepped into the post of the SABC’s group chief executive officer in July this year.

So he could not have been completely taken by surprise when he was suspended this week by Communications Minister Faith Muthambi, after his suspension was approved by the SABC board.

A legal source said Matlala was forced out because “a more compliant” SABC board was needed.

But other SABC staffers believe Matlala ran into trouble because he instigated an investigation by the national treasury into some executives, which apparently included chief operating officer Hlaudi Motsoeneng.

According to an internal document seen by the Mail & Guardian, Matlala failed to tell Muthambi and the SABC board of this investigation, which was considered to contravene “the principle of co-operative governance”.

Matlala was instructed to stop the probe “immediately” and to follow the proper channels before proceeding.