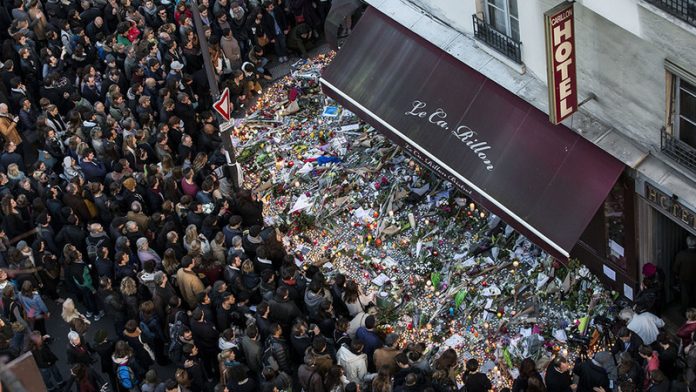 Peace for all, insha’ Allah

We woke to a traumatised France on Saturday morning. We woke to a frightened and shaken Europe. For, as easily as it happened in Paris so, too, could it happen anywhere in this topsy-turvy world of ours.

We are all targets of a madness that has been allowed to creep insidiously into our lives. Nearly 130 innocent people were mowed down in the name of the Islamic State. Hundreds more were injured. And we all mourn. But we mourn, too, for the loss of a safe and secure world in which to grow the next generation.

As a Jew, my mourning is tainted with anger and perplexity. Over the past two months, 14 Israelis have been brutally murdered and scores more lie injured in hospital.

I am perplexed by the world’s response to this barbarism. Not only are we told “It’s the settlements”, “It’s the occupation” and “It’s the houses you are building for Jews”, but the Israeli government is also condemned for protecting its citizens with too much force.

Where are the settlements in France? Where is the occupation? Or perhaps too many French citizens are being allowed to build houses?

Absurd questions, but it’s equally absurd to blame the violence Israel faces on any one of its policies.

When Muslims want to create an Islamic caliphate, it has nothing to do with settlements or occupation and everything to do with a religious calling to take over land they believe is rightfully theirs and establish an Islamic state governed by sharia law.

And, while they are butchering to get Israel, they are worming their way into other countries to wreak destruction and to take them over.

I have just watched the news about the Paris attacks. It reported on what happened, where, how, to whom, but not why. It mentioned worldwide condemnation, with Jews and Muslims united. It reported on terror links from many lands. There was only one mention of those who value death more than life. I believe the guns, grenades, ­suicide vests and bullets are incidental. It was hatred that caused this massacre. Hatred can be spread through religion and indoctrination, and religion has an obligation to neutralise it.

People are not monsters, but can be turned into them.

Police actions, security and border controls will not help as long as people are taught to hate and murder from infancy on. – Don Krausz, Johannesburg

The terror, fear and damage the Islamic State has caused since its emergence have been colossal.

Heads of state argue about the right course of action but, while all the talk goes on, the group continues to surge forward, murdering, maiming and annihilating anything that stands in its way.

Is this what Islam calls for? Are these actions justified in Islam, or is the Islamic State simply a bunch of greedy, misguided thugs, opportunists and terrorists working towards personal agendas?

Their alleged goal is the propagation of Islam, but where do they stand in relation to God’s word? In the Sûrah al-Baqarah (256), it says: “Let there be no compulsion in religion. Truth has been made clear from error. Whoever rejects false worship and believes in Allah has grasped the most trustworthy handhold that never breaks. And Allah hears and knows all things.”

My understanding is that a fundamental truth in the sacred texts is that no one can be compelled to accept Islam. No one should be threatened or harmed in any way if he or she does not wish to accept Islam.

scriptures. Allah says: “If it had been your Lord’s will, all of the people on Earth would have believed. Would you then compel the people so to have them believe?” (Sûrah Yûnus, 99).

Furthermore, “if they turn away, your duty is only to convey the Message” (Sûrah Âl ’Imrân, 20).

‘Dirt’ on the DA doesn’t stick

After nearly 10 years of Democratic Alliance government in Cape Town, the people of the city have grown accustomed to a few things. These include: clean audits, the highest level of services in the country, capital budgets spent, innovative policies and strategies, clean government, billing systems that are reliable, and basic services that work.

The Mail & Guardian has searched high and low to find something, anything that suggests an abuse of power (“City of Cape Town accused of muzzling dissenter” and “Editorial: Led astray by sins of incumbency”).

The M&G has come up with an evidence-free, “he said, she said” story about a building ­extension. If that’s all there is to complain about after a decade, we will consider our governance model a success.

It is worrying that this newspaper chose to publish an article based on nebulous assertions and to write an editorial about it. It ran on the front page [and as a lead in the Cape Town edition] when our universities face an existential crisis and discussions began about the purchase of a R4-billion presidential jet. – Zara Nicholson, spokesperson for Cape Town mayor Patricia de Lille