Will a war on terror work in Africa? 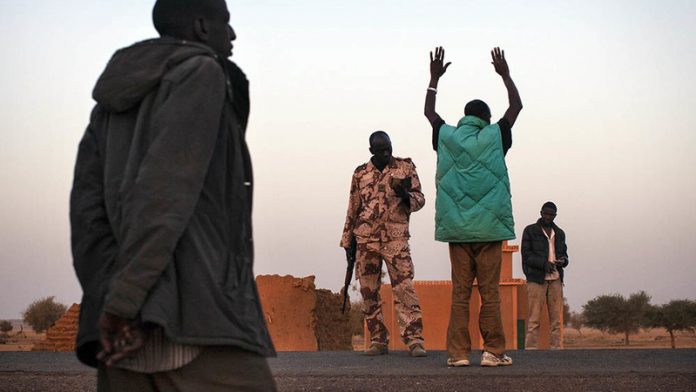 To inspect every corner of the vast Sahara Desert and root out Islamic terrorist groups once and for all is near impossible. It could take “centuries” and hundreds of thousands of troops to cover the entire area, which includes the north of Mali, where terror groups might be hiding, said French Minister of Defence Jean-Yves Le Drian at a conference in Senegal just 10 days before the dramatic attack on Mali’s Radisson Blu Hotel in the country’s capital, Bamako, last Friday.

The hostage drama in which at least 21 people were killed came as a stark reminder that just a handful of armed extremists can wreak havoc, despite concerted military action.

Le Drian said while the 3 000 French troops from the antiterrorist Operation Barkhane were tracking terror groups in Mali and surrounding countries, the United States was “controlling the skies” – scanning the desert for armed groups. Even that is not sufficient to completely eradicate the threat, he said.

There are also just over 10 000 United Nations troops in Mali that have suffered an unusual number of casualties – 56 have died while fighting terror groups in the north of the country in the past two years.

There seems to be no direct link between the Paris attacks on November 13, in which 130 people died and responsibility for which was claimed by the Islamic State, and the Bamako attack just a week later, but it added to a worldwide outcry about the threat of Islamic terror groups.

The two groups that claimed responsibility for the Mali attack – al-Mourabitoun, led by notorious Algerian terrorist leader Mokhtar Belmokhtar, and the Macina Liberation Movement – are linked to al-Qaeda and not the Islamic State.

These groups are refusing to sign a peace agreement mediated by Algeria and many analysts believe they are driven by local issues in Mali and West Africa, with no connection to the Paris events.

Is foreign military intervention effective?
The Bamako attack happened while Mali’s president was attending a meeting in Chad with leaders from Chad, Burkina Faso, Niger and Mauritania about fighting terror in the Sahel region.

The Macina Liberation Movement said in a statement that the hotel attack was to punish France’s Operation Barkhane for targeting armed groups in Mali “with the help of other nations”.

It is still not clear which group is, in fact, responsible and whether they are simply trying to gain propaganda value from the attack.

In the wake of the deadly hotel siege, the question can be asked whether the strategy of foreign military intervention in Mali has been effective.

The hostage drama is the third in a series of attacks in central and southern Mali this year. A South African working for the UN was killed in a previous attack on a hotel in the central Malian town of Sévaré in August.

Speaking while on a visit to South Africa last weekend, France’s minister of foreign affairs, Laurent Fabius, pointed out that the French military intervention in Mali in January 2013 prevented terror groups allied to al-Qaeda and Tuareg independence movements from occupying the north of Mali, which would have given it a vast, ungoverned territory similar to the Islamic State’s bases in Iraq and Syria.

“France’s intervention was very efficient because we were able to strike at the terrorists, establish control over the area and have elections in just one year,” he said at a news conference in Pretoria on Saturday.

“But this does not mean that every terrorist is destroyed. Often when they are weakened they react with spectacular attacks, and this is what is happening. Our strategy must be pursued … but it will take time,” Fabius said.

The impact of terrorism on Africa
Not everyone agrees that the military solution is the correct route to take. A new “war on terror”, led by “rich and organised states” like France and the US, could serve to exacerbate the crises already present in several parts of the world, says West African analyst Gilles Yabi.

Weak states in Africa could suffer the most from a purely military approach, just like terrorism has contributed to the near disintegration of countries like Pakistan and Afghanistan.

“African leaders should keep a cool head amidst the emotion – legitimate and widely publicised – caused by the attacks in Paris and Bamako,” Yabi wrote this week in the French daily Le Monde.

They should not immediately shift their focus away from building proper states and establishing strong institutions because the terror groups in Africa like al-Shabaab, Boko Haram and those in Mali often have their roots in political grievances. For them, terrorism is just a means to an end, he says.

Several hundred analysts such as Yabi from think-tanks across the continent, as well as military experts and high-ranking officials from the UN and the African Union, attended the Dakar International Forum on Peace and Security in Africa conference in Senegal where Le Drian spoke earlier this month.

The conference focused on the challenges raised by terrorism in Africa. Many pointed out that poverty, marginalisation and the influence of radical Islamist ideology are major factors in driving frustrated young Africans to join terror groups.

The armed groups in the Sahel are, for example, often linked to criminal networks smuggling guns, drugs and would-be migrants across the Sahara. Porous borders and local complicity make it extremely difficult to stop these networks.

“Corruption and poor governance of our states in Africa is the elephant in the room,” said Kenyan researcher Wafula Okumu, speaking on the topic of new approaches to extremist groups.

The ongoing chaos and civil war in Libya in the wake of the Nato intervention in 2011 also makes that country an ideal sanctuary for these armed groups and criminal networks, said Libyan specialist Emilio Manfredi.

Africa ‘tackles’ its own problems
Senegalese President Macky Sall said his government is committed to promoting a moderate and tolerant Islam, “the type of Islam that we have in West Africa”, notably by educating the country’s imams in this regard.

Sall said extremists want to impose practices like the wearing of the full veil (sometimes also called a niqab or burka) on Muslim African countries.

“This is not part of our culture, our traditions or our conception of Islam,” Sall said.

He later told the Senegalese media that this doesn’t mean the full veil is banned in Senegal, but that it becomes a security threat when someone wearing the veil cannot be identified. The full veil has been banned in Chad due to the wave of female suicide bombers from Boko Haram in the country.

The question was repeatedly asked: why can Africa not tackle its own problems instead of having to rely on foreign intervention? This may serve to exacerbate the problem rather than solve it, some argued.

Besides, it’s not clear how much longer countries like France and the US can sustain their operations in West Africa while fighting other wars in Syria and elsewhere, they said.

Many Africans complained bitterly about the French intervention in Mali in 2013, saying that given a bit more time and backup from other African countries, the West African troops that tried to intervene could have done it alone.

A Senegalese general at the conference said: “I had to take my troops by road over 2 000km to Timbuktu while we could have flown there if we had military planes. There are at least a dozen countries in Africa who could have assisted us, but they didn’t.”

The AU says that it is making progress with setting up an African standby force with a rapid deployment capability that could intervene in crises like the one that surfaced in Mali at the end of 2012.

In October this year South Africa hosted an exercise called Amani Africa II, which tested the capability of the force, made up of troops from the five regions on the continent. However, internal rivalry among African countries and the military forces’ lack of capacity are still hampering these efforts.