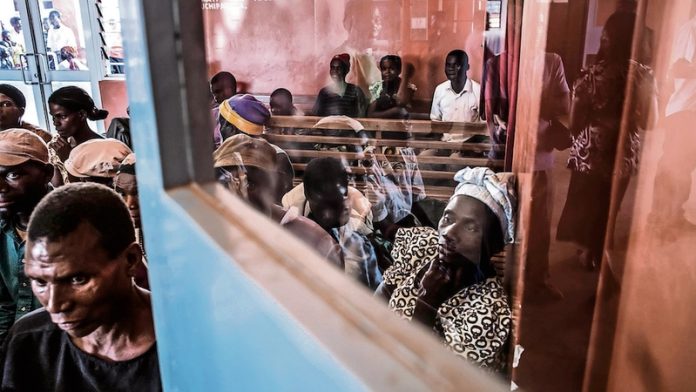 Prescription drugs plundered from Malawi’s public hospitals, including antiretrovirals (ARVs) and powerful antibiotics and painkillers, are being smuggled into South Africa and sold on the streets.

Interviews with traders in central Johannesburg said the main purchasers of the drugs are Malawians illegally in South Africa who fear being identified if they use the public health system.

Other “illegals” also buy the drugs despite the fact that foreigners are entitled to free ARV treatment in South Africa.

At the root of the trade is poor management and security lapses in Malawi’s health system, which health workers and hospital pharmacists exploit.

Malawi’s health minister, Peter Kumpalume, said in an interview this week that about a third of medicines in the country’s public health system go missing.

One million Malawians are living with HIV, half of whom are on ARVs, according to the health ministry.

Because the conversation took place in Chichewa, Malawi’s lingua franca, the traders appeared quite confident about discussing their hidden business.

The women confirmed that they sold prescription medicines, saying they buy bottles of 30 ARVS from Malawian health workers for about R50 and resell them for about R150.

Posing as a customer, amaBhungane purchased a bottle of the ARV Tenofovir (Lamivudine) for R150 and five tablets of Bactrim, an antibiotic used for preventing opportunistic infections in people living with HIV, for R15.

Amoxicillin, another antibiotic, and Indocid, a prescription painkiller, sell for R6 a tablet.

The medication is sold without medical advice or verification of customers’ HIV status, and without knowing whether, from a health perspective, they qualify for the medication.

Both traders, who are from Lilongwe, said they had sold medicine in Johannesburg for more than seven years.

“Health workers have their own ways of taking [the drugs] out [of the hospitals] without getting into trouble,” said one.

They said they ventured into smuggling the life-prolonging drug into South Africa in a bid to supply the “enormous” community of Malawians who live with HIV and Aids.

They also revealed that they smuggle the medication across the South African border hidden in foodstuffs, such as bags of rice, beans and dried vegetables.

The women said they normally leave the ARVs and other prescription drugs in their Johannesburg flat and fetch them on request from customers. Most of their clients are referrals from Malawians who buy from them.

It appears that foreigners without valid documents, who fear being exposed, choose to consume black-market drugs.

Francois Venter, deputy executive director for the Wits Institute for Sexual & Reproductive Health, HIV and Related Diseases, stressed that drugs sold on the streets are unsafe and ineffective.

He added that, since 2005, foreigners have been able to access free HIV medication in South Africa.

“I was part of the group who fought for foreigners to get free HIV care,” he said. “Our clinic in Hillbrow treats lots of foreigners for free and it’s a department of health clinic.”

“We only need an identification for our records and proper follow-up. ARV is not a once-off medication but a lifetime treatment, so we need to note the details for the patients’ own good,” he said.

“They are also compromising their health”

Maja said those people who buy black-market ARVs are missing out on regular viral load and other check-ups, as well as medical advice.

“They are also compromising their health because, generally, the traders have no expertise in medicine storage,” he said.

The revelation of ARV smuggling coincides with a rash of media reports about thefts at public hospitals in Malawi.

Few of the thieves are caught and prosecuted. The Pharmacy, Medicines and Poisons Board said that between January and September this year just 28 people implicated in medicine theft were arrested and charged.

Most are charged with being in unauthorised possession of medical drugs without a licence, rather than theft, which carries a relatively lenient sentence.

One exception was the 18-year jail term with hard labour for possession of government property suspected to have been stolen or unlawfully obtained.

Malawi police service spokesperson Nicholas Gondwa said no one in Malawi has been arrested for smuggling medical drugs abroad.

“They want to continue their business after their jail term, so they don’t want to betray their sources”

People had been arrested inside the country for stealing painkillers and antibiotics, or for operating illegal clinics. But no one had been charged with selling ARVs, he said.

Gondwa said the major challenge the police face is that the thieves do not reveal their suppliers.

“They usually say they bought it from an unknown vendor at the border. This means they want to continue their business after their jail term, so they don’t want to betray their sources,” he said.

“Hospital pharmacists are the ones perpetuating this,” the health minister said. “This is a very big problem in Malawi, which relies entirely on donor funding for HIV treatment.”

He said he was shocked to hear that medical drugs are being smuggled out. “The ministry has never received reports of this. Even our donor community has never raised such a concern.”

Kumpalume said the lack of a national identification system in Malawi has led to abuse, because those who were not entitled to treatment are getting access to medical drugs – sometimes at several points in the health system.

Since 2003, ARV treatment in Malawi has been solely funded by the Geneva-based Global Fund to Fight Aids, Tuberculosis and Malaria.

Early this year, the fund questioned the Malawi government’s diversion of its grants for unplanned expenditure, including the purchase of off-budget vehicles. For the first time, it asked President Peter Mutharika’s government to raise $8.5-million (about R122-million) as a contribution to the final six months of the grant. The fund also asked the government to repay about R3-million, which the government said it would do in instalments through the national budget.

Last month the United States ambassador to Malawi, Virginia Palmer, slammed as “unacceptable” the rampant theft of drugs from public hospitals and their resale in markets. She warned that, if the trend continues, her government will stop supplying antimalarial drugs and other medicines.

A key weakness of the Malawi health system is that there are no centralised patient records, making it possible for a patient to source medical drugs from a number of different hospitals or district clinics and sell them on the streets.

But that is not the only problem. An amaBhungane investigation revealed that health workers use various strategies to steal, including colluding with patients by over-prescribing. In some cases, they have duplicate keys cut to hospital pharmacies.

A common strategy is for health workers to buy health passports in which the medical history and drug needs of Malawians are recorded.

These are then used to claim medicines on behalf of “ghost” patients said to be “relatives”.

Health passports can be bought in or out of hospitals for about R2.50.

As long as a health worker presents the passport to an ARV clinic, the name on it will be registered for treatment and the presenter can access drugs without arousing suspicion. The system also allows patients to source several months of drugs because of the often long distances patients have to travel from their homes to the nearest health facilities.

AmaBhungane was told it is rare for health workers to be caught stealing because they use patients to move the drugs out of the hospital to evade random searches.

Sources said health workers protect each other and do not testify against each other in court.

Last month the health ministry embarked on an ambitious project to install CCTV cameras in its hospitals and pharmacies.