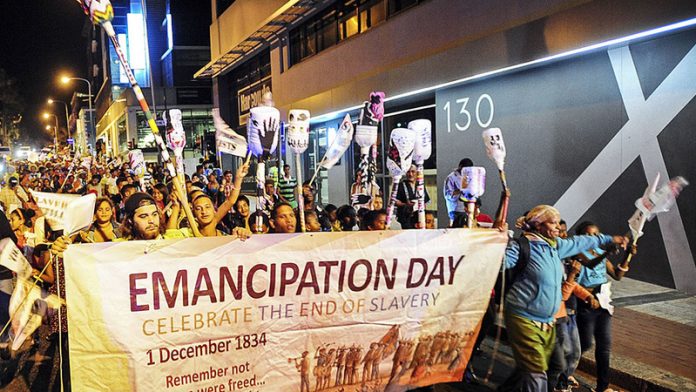 December 1 slips past relatively unnoticed on Cape Town’s calendar. But for Tauriq Mellet, a 60-year-old heritage activist, it is “a day when a terrible, obnoxious order came to an end”.

For the past nine years, on the eve of December 1, a few hundred people have gathered to remember Emancipation Day, when slavery was officially abolished in the Cape.

This year, about 350 people assembled at the Strand Street quarry with lanterns and banners to honour those who fought for slavery to end. Yet, 181 years after it was abolished, history books still don’t reflect the truth about slavery in the Cape.

“What the history books tell us is that some of the indigenous people were never slaves, but that’s … rubbish,” says Mellet, who runs the South African Thai Heritage Centre. “Frontier farms didn’t import slaves; they made slaves out of local populations.”

As an eight-year-old boy, born of black and white parents in District Six, Cape Town, Mellet became transfixed by the history of his family, particularly when the Group Areas Act and forced removals destroyed and divided his home.

Through vigorous research, he learned that 22 of his ancestors were of Khoi descent and discovered their essential role in building Cape Town. He also learned that the first struggles for liberation were fought long before apartheid, as slaves revolted against their masters in Cape Town.

“If somebody asks me who I am, what I am, in terms of these silos of race, I say I am born of the people that rose above adversity. That is my identity,” says Mellet.

Historians regard the slave revolts as the first struggles for freedom in South Africa – some slaves were even imprisoned on Robben Island.

For the Emancipation Day Coalition – a collective of volunteers and organisations that commemorate the day –± it is vitally important to remember the slaves’ fight.

“We recognise that nobody was doing us a favour [by freeing slaves], because they had no right to enslave us in the first place. It says here: ‘Remember not that we were freed, but that we fought’,” says Michael Weeder, a volunteer with the coalition, as he points to the big commemoration banner while addressing the crowd at the quarry.

The coalition has faced challenges in trying to mobilise Emancipation Day celebrations and has struggled to draw large numbers of people to commemorate the history of slaves.

For Weeder, the lack of participation shows a gap between Capetonians and their history.

“It fluctuates; people come and they go,” Weeder says. “The main participants come from the Cape Flats, so it’s about getting them here, reminding them, and to get the schools involved.

“The fact that we don’t have thousands here reflects on how people are alienated from their history.”

The struggle to commemorate the freedom struggle of slaves in Cape Town dates back to 1834, when emancipation was announced. Although slaves were meant to be freed that year, most were forced to enter into apprenticeships for another four years so that a substitute for bonded labour could be found. Thus, the freedom celebration was delayed.

Lydia Williams, a liberated slave who lived in District Six until her death on June 16 1910, used to gather people together on December 1 in remembrance of Emancipation Day and show them the scars that had disfigured her back from the numerous whippings she received.

“There’s more attention in the history books these days to slavery, but certainly there’s more that could be done,” says Paul Tichmann, curator of the Iziko Slave Lodge museum in Cape Town. “To a certain extent, colonial narratives overshadow alternative narratives.”

With the exception of the Slave Lodge, which housed up to 9?000 slaves between 1679 and 1811, and the slave memorial in Church Square in Cape Town’s central business district, public spaces in the city still marginalise the memory of slaves.

“The Castle, I think, is beginning to address some of that. But we talk about an integrated history and all of those sites should actually be talking not just about the Dutch East India Company and that history, but about slave history as well.”

The Castle of Good Hope in Cape Town, built almost 350 years ago, is the oldest building in South Africa. Under Jan van Riebeeck, it became the country’s first Parliament, but it was slaves who painstakingly built its infrastructure.

“Most of you are very young,” Calvin Gilfillan, the chief executive of the Castle, tells the crowd of Emancipation Day marchers, as they ended the night on the Castle lawns. “Come to the Castle, come to the points we see here, because these points of pain are what I’m confronting here today.”

For Mellet, it is the emphasis on colonialism that has allowed significant facts to be overshadowed in Cape Town’s history. He says the focus has created a “false separation” between people in the city, particularly among people of colour, who share histories of oppression.

Although tensions still exist between black and coloured people in Cape Town, Mellet says that traces of Khoi blood were found in the Xhosa population centuries ago.

At the 2015 Emancipation Day march, researchers in the crowd spoke of the diversity and unity among slaves, who hailed from African and Asian countries, and their skills and their contribution to the city. But many of them believe that a lack of access to information has adversely affected coloured identity in the Western Cape.

“Our issue of identity emerges out of this dominant idea of being in-betweeners. I think this denial of information [about a history] of which you can be proud has fed into this thing [conflictual identity issues],” Mellet says.

According to Bonita Bennett, spokesperson for the coalition and director of the District Six Museum, many South Africans are trying to connect with iconic heroes in national history, rather than unsung heroes, because of the shame associated with slavery.

“Where we are in our country’s development seems to favour celebrated icons and heroes of history. For many people, it is difficult to voluntarily associate themselves with the history of the ‘victims’ of history. Everyone wants to be descendant from a historical hero, which is not possible,” Bennett says.

But many, like Mellet, see slave history as a point of ancestral pride. Although he believes that the creativity, diversity and culture of slaves has been largely veiled by a colonial narrative, Mellet still has faith that their heritage can be restored.

“What we’ve got to do is reclaim that history and that heritage, and peel back the layers so that the youngsters can know,” he says.