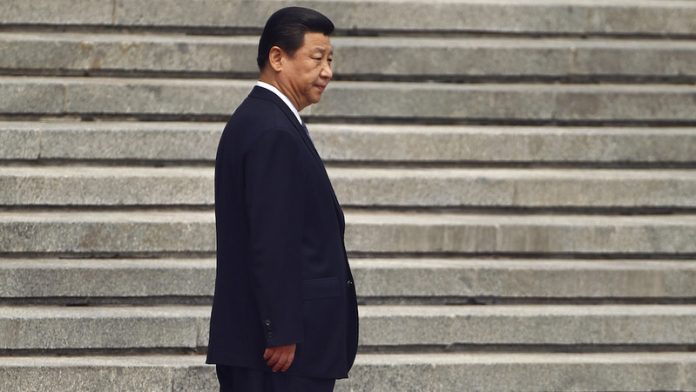 Four Chinese journalists have been suspended after inadvertently – and incorrectly – announcing the resignation of President Xi Jinping.

A typographical error in the opening sentence of a report about Xi’s recent tour of Africa meant that, instead of informing readers about a speech (zhi ci) given by China’s commander-in-chief, reporters referred to his resignation (ci zhi).

The story was published on Friday by the official China News Service and was subsequently reprinted, before being corrected, by a number of leading websites.

Among those reportedly punished for the gaffe was Song Fangcan, the news agency’s bureau chief in South Africa, where Xi had been speaking at the end of an five-day visit to the continent.

The incident punctured an unusually fawning period of press coverage about Xi, even by the standards of China’s heavily controlled state media.

Last Friday, the front page of the People’s Daily, the Communist Party mouthpiece, was smothered with Xi-related news, with 11 of the 12 headlines starting with the president’s name. Page two was similarly grovelling: it featured nine photographs of the man Chinese spin doctors have dubbed “Xi Dada”, which means “Uncle” or “Big Daddy” Xi.

Even the Southern Weekly, until recently one of China’s most respected broadsheets, appears to have caught Xi fever.

Earlier this month it published a 13 000-word eulogy to the Chinese president on its front page, causing consternation among liberals who had viewed the newspaper as one of the last bastions of serious reporting.

Founded more than two decades ago, the Southern Weekly was long considered a pioneer of boundary-pushing investigations known in China as “watchdog journalism”. But critics say the Guangdong-based newspaper has been on the slide since at least early 2013, partly as a result of increased censorship and political control.

Bandurski said the intensity of the Chinese media’s focus on Xi was striking compared with that of the president’s predecessors. “You have to go back to Mao Zedong to see this level of coverage,” he said.

“We can’t say that he has more power but certainly they are attempting to make a show of strength. We don’t know if it is a collective idea on the part of core leaders in the party to push him forward to centre stage as a strong leader or [if it is] he himself taking centre stage,” he added.

But the growing emphasis on Xi is fuelling concerns – even in the Communist Party – that after decades of moving towards a more collective system of governance, China is now falling back towards the kind of personality cult seen under Mao.

“This trend [towards collective rule] seems to be reversing in a way when we see Xi Jinping taking control himself of things like domestic security, like internet security, and then we [see] such a strong showing in the media coverage itself,” Bandurski said.

Zhan Jiang, a journalism professor from Beijing Foreign Studies University, said the Southern Weekly’s sudden enthusiasm for Xi is probably linked to the arrival of a new propaganda chief in the region who is “highly trusted” by the Communist Party’s top leaders.

The severity of the punishment handed down to the journalists responsible for Xi’s unexpected “resignation” remains unclear. An editor at one state-run newspaper told Hong Kong’s South China Morning Post that the mistake would be viewed as a “serious blunder” but would not end their careers.

“Some people will receive a warning and might be suspended from work for a while to show to the propaganda department that they take such a mistake very seriously,” the editor said. “After a while, when the incident is forgotten, they will be able to resume their duties.” – ©?Guardian News & Media 2015