Sylvia Glasser dances to her own drum 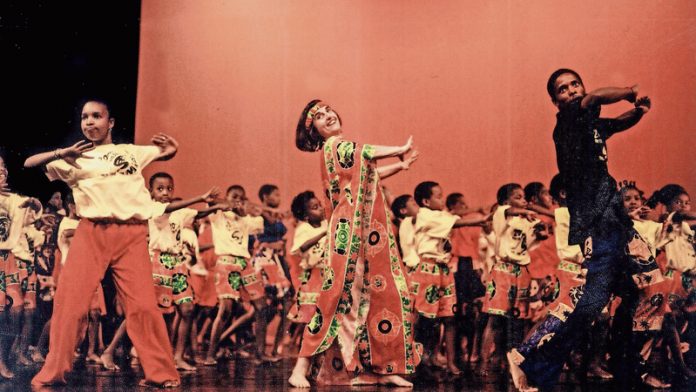 Dressed in a floor-length purple dress and on the arm of dancer Muzi Shili, Sylvia Glasser (75) gyrates and bends to the rhythm as she nimbly dances across President Street in Newtown, Johannesburg, to the farewell reception for her at the Dance Factory.

This is how many Moving into Dance fans and supporters will remember the company’s dynamic founder – affectionately known as “Magogo” to many – who leaves South Africa soon to embark on a new chapter of her life.

Having established arguably South Africa’s most important contemporary dance company in 1978 from the garage at her home in Victory Park – long before it was fashionable or even legal to host black and white dancers on the same stage – Glasser unequivocally changed the nature of dance in South Africa.

Glasser’s protégés include international contemporary dance luminaries such as Vincent Mantsoe, whose globally respected company Association Noa is based in Saint Pont, France, and Gregory Maqoma, who has been wowing dance aficionados worldwide with the work of his Newtown-based company, Vuyani Dance Theatre. And there’s a bunch of other successful choreographer-dancer-teachers such as Moeketsi Koena, Portia Mashigo and more.

Indeed, one would be hard-pressed to name one professional contemporary South African dancer who has not been touched by Moving into Dance in one way or another.

Glasser’s farewell, which saw her dancing across the street, was hosted in Newtown late last month and featured never-seen-before footage of her performing in the 1970s as she was growing into her stride, blending dance with advocacy and strong political opinion with new expressions of movement.

“My life has been a gift,” she says. “Difficulties have been there but they have spurred me on as ­challenges to conquer.

“MiD was like a huge fungus that took over my life. I think if you don’t understand your past, you can’t go into the future. Many people have not understood the company’s core, ethos, philosophy. They have seen the surface only.”

Nine years after establishing the company, Glasser succeeded in getting it a permanent home at the Braamfontein Recreation Centre. It was 1987, the country was reeling from the State of Emergency, and it would be another three years before the Separate Amenities Act would be repealed – but, despite the huge odds, she got her multiracial company a home in the city centre.

Twelve years later, and five years into the new democratic dispensation, Moving into Dance relocated again, to the burgeoning Newtown cultural district, and by 2009 it moved into its very own purpose-built building, designed and created under the auspices of the Johannesburg Development Agency in an attempt to “spruce up the area”.

Explaining the huge innovations her career trajectory has embraced, Glasser laughs at a photograph of herself as a youngster, en pointe and in a tutu.

“This is my dirty secret,” she says jokingly, referring to her famous aversion to ballet, as she developed an alternative reflection of dance that melded African tradition with contemporary improvisation.

“It’s not ballet I’m against,” she says. “It’s the whole system, the rigidity, the fact that it’s based on what was started in the 16th century and that it’s so competitive, with body image issues and destructiveness. That’s what I’m against. And I’m still against it.”

The daughter of a European refugee, Glasser was born in Polokwane (formerly Pietersburg) in 1940.

“Because my father’s skin was white, in South Africa he was able to make a living and educate my brother and I, and even send me overseas to study.

“I was very disturbed by the politics of the time.” At Moving into Dance, colour was never an issue: “Just working with black and white people together was a huge political statement. I went back to university in 1987 to study social anthropology. I wanted to know more about what I had been doing instinctively. I wanted to understand how this really horrific system that we lived in, how it came about.”

The horror of David Webster’s death – a committed anti-apartheid activist who was shot dead outside his house in 1989 by a covert apartheid military unit, the Civil Co-operation Bureau – was a turning point for Glasser. Not only had she lost a good friend and intellectual sounding board, but it was, she says, like an element of her political conscience had been chipped open and left raw. But the killing provided an important incitement for her to continue choreographing and ­developing dancers.

In tandem with keeping a politically sensitive nerve alive in her work, Glasser held Moving into Dance together through relentless fundraising and by continually rethinking its repertoire.

Among other approaches to dance, she developed Edudance, which teaches the school curriculum using physical movement to explain theoretical principles.

Feisty to the last, Glasser concludes: “I was successful because I never listened to anyone and dared to dream. In 1978 I dreamt of a company where dancers of all colours, cultures, creeds and classes would dance together in a free and democratic country. Of a school where talent is the entrance requirement, commitment the currency and caring the culture. Of dancers that think and thinkers that dance, dancers that teach and teachers that dance, of dancers that create and talk, with dancers as strong as lions, as swift as cheetahs and as graceful as impalas.

“I dreamt of a company whose quality of performance would be its passport to the world and whose work would be embodied in a contemporary African landscape ­coloured by ancient memories and modern textures.”

Has her dream been deferred? Will Moving into Dance have a future beyond Glasser? Pragmatically reflecting on the types of challenges facing dance companies and dancers today, Glasser says: “In the past 38 or so years, I have not stood on a stage when I haven’t spoken about money [needed to fund dance]. Somebody said to me, you can’t just get up and ask for money. I said: ‘Really?’

“There is much talk of self-sufficiency in dance. It’s bandied around as though it is something you can wear because it is fashionable. In my many years, I have been privileged to have taken advantage of my husband’s academic sabbaticals and I have worked in many countries. I have met the directors of many professional dance companies, in the United States, Europe and Canada.

“Any dance company that makes the audience cry, that has a strong ethos where people are more important than policies, that moves people – audiences and performers – spiritually and transforms their lives, any company where people stay and work for salaries that are not competitive with the commercial corporate world, does not cover its expenses through performances alone. Like Moving into Dance.

“What’s the use of giving money to Business Against Crime when here is an organisation with proof, in the people, thousands of them. We’ve changed lives. Sure, you can commercialise a dance company. But you will not have a company that transforms people, that makes people cry.

“I’m told I am old-fashioned,” she says, criticising those in the industry who have condemned her work and the manner in which she ran the company. “It’s not just the dance I understood and ran. I have been told that I don’t understand business. How can you survive with no capital investment and at one point employ over 30 people? I didn’t do it by myself. But I do believe MiD has a future.”

The question of what made one a terrorist is easy to answer: any form of opposition to apartheid.
Read more
Friday

Sylvia Arthur, the founder of the Library of African and the African Diaspora in Accra, selects five works by her favourite Ghanaian authors
Read more
Advertising
Continue to the category
Business