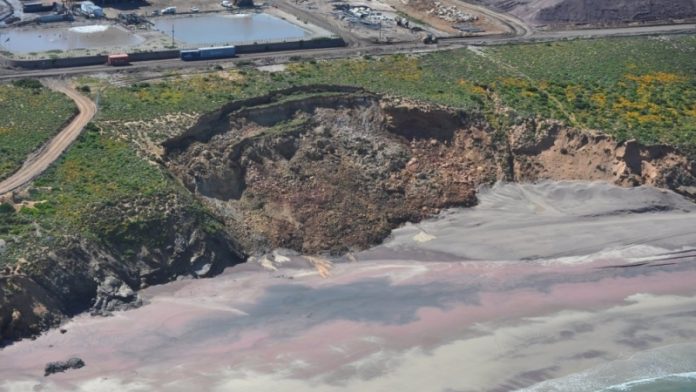 Activists have accused government officials of turning a blind eye to a pattern of environmental violations at the Tormin dune mine on the West Coast – including a “catastrophic” cliff collapse – after state departments failed to act on a string of letters, objections and a formal appeal.

MSR Tormin, 40km from Vredendal, is owned by Mineral Commodities, an Australian company that is also at the centre of the long-running battle over proposed dune mining on a far larger scale at Xolobeni on the Eastern Cape’s Wild Coast.

Among other breaches, Tormin is accused of expanding the mine without authorisation under the National Environmental Management Act; mining garnet in violation of the environmental management plan; mining in conservation areas; using unauthorised roads to transport products; and pumping raw sewage into the sea.

It is also accused of causing the collapse of the beachfront cliff below its processing plant through inefficient control of the plant and operating too close to the cliff in breach of approval conditions.

“The plant stands within 100 metres of the cliff,” said Dinah Louw, an environmentalist  familiar with the area. “Excess water is not controlled and there is constant run-off into the environment, killing vegetation and causing erosion and seepage.

“This destabilised the cliff face and caused the collapse, which because the company is doing nothing is spreading. The sensitive dune and cliff biodiversity are lost and the cliff face can’t easily be rehabilitated.”

Louw said the collapse “is visible to any government official visiting the site but has never been addressed in any communications with the community or the company”.

“The company keeps on saying it’s a natural collapse for this area. But this is the only part of the coastline where it has happened.”

DMR officials allegedly met the National Union of Mineworkers in nearby Vredendal as recently as last week.

Tormin chose not to comment in detail. A public relations consultant engaged by the company, asking not to be named, maintained that “the mine is fully permitted and there have been no breaches of any regulations”.

The DMR was sent emailed questions on two occasions and phoned repeatedly for comment, but had not responded by the time of printing.

AmaBhungane reported in early November on the labour turmoil at the Vredendal mine on the arid coast 400km north of Cape Town. Ten Tormin workers are facing public violence charges in connection with a five-week wage strike (See “Dismay as cops withdraw cases against Tormin managers” below).

Louw said that she submitted objections and wrote letters to the DMR between January and August this year – without result.

“The letters highlighted the serious environmental and social transgressions taking place on the Tormin site and in the Lutzville area.”

Louw said only the provincial mineral resources department replied, saying their hands are tied as mining operations fall under the national DMR.

She also complained that in July this year she appealed against the DMR’s rubber-stamping of the amendment.

“Please note”, she said, “that the amendment was approved in April 2015 – but the company didn’t inform any of the objectors or interested and affected parties.”

Section 10 of the Mineral and Petroleum Resources Development Act stipulates that the objectors should be allowed to make representations to the government’s regional mining development and environmental committee before approval is granted.

“To date DMR has not responded to the appeal, and it is the view of various role-players that they will just hang this one out for as long as they can.”

Louw charged that the national and provincial departments were misinterpreting environmental law to justify lack of enforcement. The community also submitted a memorandum of complaint to DMR offices early in November, but “have not received a response from the regional manager as requested”.

Tracey Davies, an attorney who works for the Centre for Environmental Rights in Cape Town, said as soon as Tormin started operating in March 2014 it applied to the DMR to change the environmental plan approved by the department two years earlier.

“There was a whole bunch of things they wanted to do, including increasing the footprint of the processing plant. They also wanted to put a garnet stripping plant but they don’t appear to have a mining right for garnet. They wanted to double the size of the plant and there were issues around public participation.

“Initially, a DMR official told the company that they had to do an environmental impact assessment; the company went above him and complained to the regional manager.

“All of a sudden the application was granted in April 2015, and no further EIA or studies were done. The DMR has received complaints about this but has done nothing,” said Davies.

She alleged that Tormin had expanded the plant before the amended plan was approved in April 2015, meaning it was liable to a fine.

“The DMR has been alerted to the fact people disagree with this situation and has done nothing.

“We’re now sitting with the situation where Tormin have unlawfully expanded their operation, and the government departments responsible for monitoring have given them permission to do it.”

Davies said that as the Tormin case is “one of our first examples of how the DMR is going to interpret environmental legislation, we’re in huge trouble, especially because they are completely unresponsive, they won’t listen, they won’t respond to appeals, they just completely ignore the issue.”

Activists charge that enforcement has suffered after responsibility for enforcing environmental legislation on South Africa’s mines was transferred from the environmental affairs department to the DMR.

The complaints about Tormin’s environmental practices have been taken up by the National Union of Minworkers, which has members at Tormin.

On November 13 NUM members and the Matzikama municipality, which covers Lutzville and Vredendal, marched to the DMR offices in Cape Town to hand over a memorandum.

Among other issues, this demanded that the suspension of Tormin’s mining licence for “the illegal mining of conservation and no-go areas; plant water leakages which caused a cliff collapse; illegal dumping of garnet; illegal storing and pumping sewage into the ground”.

Police cases against three Tormin mine managers, one of whom was accused of driving into and knocking over a mineworker during a strike, have all been withdrawn.

About 200 Tormin employees went on strike on September 4 over wages and working hours. Several were arrested after clashes with police and mine security guards, and ten miners and community leaders are to appear in court in January on charges of public violence.

But charges against three mine managers have been withdrawn.

One charge – discharging a firearm in a public place – relates to accusations that during the strike Tormin’s general manager instructed two private security guards to fire at a gyrocopter flying over the mine.

Two shots were fired, but missed. No one was injured.

Police spokesperson Frederick van Wyk said the docket was sent to the state prosecutor and the case withdrawn October 30 due to insufficient evidence.

“No complaint was ever received from the person who flew over the area and no proof of any shooting could be found,” he said.

But the Tormin employee who reported the incident said was not contacted by police.

Although police took her statement, the employee said no one told her what happened to the case. “I’m still waiting to hear from the police,” she said.

Charges against an engineering supervisor and a foreman were also withdrawn, Van Wyk said.

The supervisor was charged with reckless and negligent driving after one of the miners, Isac Luveve, was knocked down by a vehicle on September 10, during the strike.

Luveve was treated for minor injuries in hospital.

The foreman was accused of using a loader from the mine to throw a burning tyre onto a vehicle during the strike.

“It’s very disappointing to see how the legal system works for some people. How can cases be withdrawn that easily? Especially the case that happened on September 4. We have video footage of the incident. The police were there and did nothing at the time,” he said.

Fredericks also said that 25 workers suspended after the strike on charges including “participating in actions detrimental to the interests of the employer” and “badmouthing the company”, had been asked to sign new contracts and told not to join the NUM.

Fredericks said the new contract meant workers would work fewer hours. If they agreed not to join the union, they would receive an 8% salary increase at the end of the year, he said.

Tormin spokesperson Anne Dunn said the company would not comment on the allegations or respond to other GroundUp questions. – Barbara Maregele

* These articles are based on a joint investigation by amaBhungane and GroundUp.

It’s not just Xolobeni: What the Australian mining company did in the Western Cape

​The day big mining won the battle to wreck the environment

West Coast dune mining – is the tide turning on Tormin?