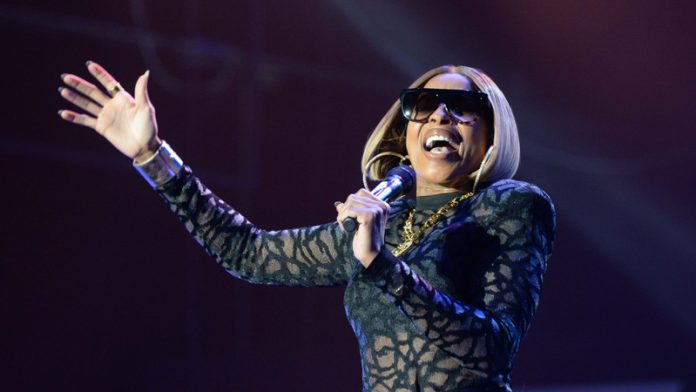 The first ever BET Experience Africa took place over the weekend at the Ticketpro Dome, Joburg on December 12 and it kicked off on the right foot with an impressive all-day entertainment line-up that featured African and US musicians live on stage. The event is dubbed as the “ultimate lifestyle festival” and happens annually in the US.

US R&B singer Mary J Blige gave an unforgettable performance of her 1990s classics and her most recent hits, that included music from her 2014 album, The London Sessions. Blige, who is best known for her heartfelt ballads, also took time to speak against women abuse, before performing her anthems No More Drama and Not Gon’ Cry. Blige performed on the concert stage, which was situated inside The Dome.

The evening concert started at 16:30 and ended just after midnight. Other artists who performed on the concert stage included Tanzanian singer Diamond Platinumz and Nigerian singer Flavour, who both gave solid performances and had audiences dances.

South African hip hop artist AKA also didn’t disappoint – he was joined on stage by artist Yanga. AKA performed Composure, his diss track to Cassper Nyovest, which he introduced by stating that he found it ironic that he was performing that specific song at The Dome. In October this year, Cassper became the first South African artist to fill up The Dome.

Atlanta hip hop artist Young Thug, who showed up on stage dressed in fur boats and a coat (not sure if was real fur or not), had the younger crowed nae nae’ing throughout his set.

Soul musician Raphael Saadiq slowed it down with some neo soul sounds. He, along with his band paid tribute to Nigerian afrobeat legend Fela Kuti, while fellow soul singer and headliner Maxwell concluded the night’s programme with his performance. Maxwell brought romance to The Dome, but his falsetto was a no-show. He struggled to hit the high notes, but his lower register and stage presence made up for his shortcomings.

The daytime festival stage, which was outside The Dome, featured artists, Monique Bingham, Black Motion, Euphonik, Nathi, EMTEE , Fifi Cooper, and many more.

The overall attendance of the event was impressive. From a fashion show to car drifting, there was a lot to see and do and the programme was a bit overwhelming.

“This event is a celebration of the great talent that we have and we hope to create an experience for the consumers with our brands,” said Alex Okosi, senior VP & managing director at Viacom International Media Networks Africa, during a press conference held ahead of festival. Okosi stated that he hopes to grow the festival in the years to come.

More and more 1990s R&B music acts are flocking to SA this festive season, with Boyz II Men being the next act to perform in Joburg tomorrow night at the Ticketpro Dome. This morning Live Nation and Big Concerts announced that US songbird and 1990s singing sensation Mariah Carey will perform in South Africa for the very first time in 2016 as part of her Sweet Sweet Fantasy tour. The tour will take place on May 1 & 2 at the Ticketpro Dome in Jo’burg.

Carey recently had a Las Vegas residency, which received mixed reviews. But despite the criticism, the songbird has remained relevant. She has sold over 220 million records and has won five Grammy awards. Audiences can look forward to hearing her hits, Fantasy, Always Be My Baby and Hero, live on stage in 2016.

TV presenter Zizo Beda and Home Affrairs spokesperson Mayihlome Tshwete tied the knot over the weekend in the East London. Beda, who is expecting the couple’s first child, was glowing in her white gown. Their wedding guest list consisted of A-listers – from politicians to entertainers. Legendary kwaito star Thebe Mogane performed at the wedding reception, held on December 11. The following day Beda and Tshwete celebrated their traditional wedding in King William’s Town, where they both wore the Xhosa attire.

The first lady of the United States of America, Michelle Obama, is officially the coolest first lady to ever grace the White House. She recently starred in a music video, where she is seen dancing and rapping about the importance of going to college in the song, Go to College. In the humorous video she is joined by US comedian Jay Pharoah and together they appeal to young people to take education seriously. Obama is also seen stepping out of the White House with Pharoah, wearing sunglasses – looking uber-cool.

“If you wanna fly jets you should go to college,” they sing.

Matt Damon in The Martian, which is nominated for Best Motion Picture – Musical or Comedy.

Established stars and newcomers from as far afield as Sweden, Australia and Mexico as well as the United States were honoured with Golden Globe nominations on December 10 for their work in movies and television.

Following are some reactions to the nominations, chosen by the Hollywood Foreign Press Association (HFPA), as expressed in statements, by phone and through social media.

Leonardo DiCaprio, best actor nominee for The Revenant: “I am incredibly grateful for their nomination, as well as the recognition they have given to this film and to Alejandro’s (Inarritu’s) vision as its director. Making The Revenant was a true honour for me. I also want to extend congratulations to all nominees this season.”

Michael Fassbender, best actor nominee for Steve Jobs:  “This film, and working with Danny Boyle and our amazing cast, has been one of the most creative and amazing experiences of my professional life. It’s lovely to be honoured.”

Lady Gaga, best limited TV series actress nominee for American Horror Story: Hotel : “I am too excited for words at this recognition for my work! I dreamed endlessly of being in television & film. This is a real honor for a waitress/singer/actress from New York!”

The Golden Globes are chosen by 90-plus journalists of the Hollywood Foreign Press Association, and winners will be announced at a televised ceremony on January 10.

*Updated version: Mayihlome Tshwete’s name was spelt incorrectly in the previous version of the story. The correction has been made.