Helping the poor find their feet 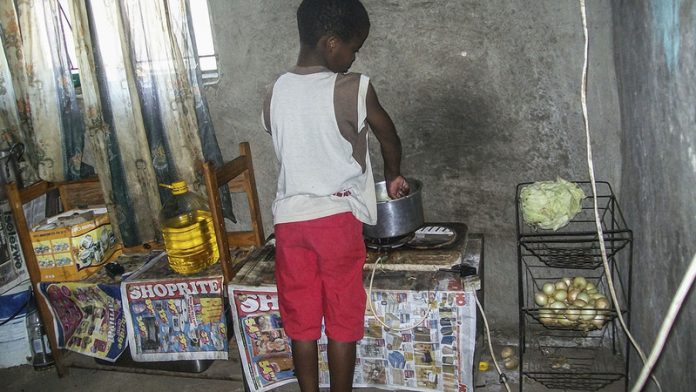 When Xolani Mbuyisa was seven years old, his mother passed away and he was left in the care of his grandmother, Rose. Over the course of the next six years, Rose lost all her children and was left as primary caregiver to four grandchildren, including Xolani. Her only source of income was the little she earned from washing clothes.

Then Rose heard about Thandanani Children’s Foundation, a nongovernmental organisation, and approached it for help. Thandanani began assisting her through its Family Strengthening Programme. Partly as a result of this support, Xolani was able to stay in school and complete his matric — with exemption — in 2011. After matriculating, he was accepted to study towards a BSc degree at the local university. His grandmother scraped together his registration fee and Xolani received support from the National Student Financial Aid Scheme to cover his tuition.

However, as he had no money for accommodation, Xolani walked from his home in Slangspruit to campus and back each day to attend class — a round trip of 18km. He did this for two years until Thandanani stepped in to provide him with a travel and subsistence bursary during his final year.

Xolani’s determination has paid off — he graduated last year and is now registered for an honours degree, and Thandanani has extended his travel and subsistence bursary for a further year.

“I am determined to make a better life for my family,” says Xolani.  “I no longer want to see my grandmother struggle. I want a better future for her and my cousins. I want to set a good example, and show that nothing is impossible if you are prepared to give it your all.”

The Mbuyisas aren’t alone in their struggle against dire poverty. Despite South Africa’s transition to democracy, poverty, illiteracy and HIV continue to dominate the lives of millions of South African children and their families.  The figures are depressing:

• 54% of all children in South Africa (approximately 18.6 million) and 64% of children in KwaZulu-Natal live in poverty with a per monthly capita income of below R671 per month;

• 31% of all children in South Africa and 37% of children in KwaZulu-Natal live in households where no adults are employed in either the formal or informal sector;

• 17% of all children in South Africa and 25% of children in KwaZulu-Natal live in households where there is child hunger (a lack of regular meals);

• 23% of all children in South Africa and 24% of children in KwaZulu-Natal live in overcrowded households;

• 21% of all children in South Africa and 27% of children in KwaZulu-Natal have been orphaned (either single or double);

• 30% of all pregnant women in South Africa and 40% of pregnant woman in KwaZulu-Natal are HIV-positive (the highest prevalence rate in the country); and

• 3% of all children in South Africa and 4.2% of children in KwaZulu-Natal are HIV-positive.

“Children growing up in these circumstances are rendered extremely vulnerable,” says Duncan Andrew, the director of the foundation.  “Among others, the demands of having to care for dying parents, the trauma associated with the loss of their parents, the loss and lack of material security (household income, shelter, security of tenure and physical protection), the lack of food security resulting in hunger and an increased risk of malnutrition, and the loss of childhood as a result of having to take on adult roles (such as provider and caregiver to younger siblings),” he explains.

“Ultimately, this maintains the cycle of poverty and undermines the ability of the child to live a full and meaningful life,” says Andrew.  Consequently, many nongovernmental organisations working in the province focus heavily on assisting orphaned and vulnerable children (OVC).

Founded in 1989, Thandanani Children’s Foundation facilitates community-based care and support for orphans and other vulnerable children — particularly those affected and infected by HIV — in the KwaZulu-Natal Midlands.

“We do this by engaging and training residents from the communities in which we work to identify and address the basic needs of families caring for orphans and other vulnerable children in their communities,” says Andrew. “With the support of Thandanani staff, these fieldworkers then address the basic material, physical, cognitive and emotional needs of OVC households in their community.”

Since April 2010 Thandanani has supported a total of 10 813 beneficiaries across 1 476 households via its OVC/Family Strengthening Project.

Once identified as vulnerable in terms of a set of criteria, households are supported through a structured system of household intervention that is designed to systematically address their basic material, physical, cognitive and emotional needs, and move them from a state of vulnerability to increased stability and self-reliance within a three-year period.

“Once this happens households exit our system and function independently of our support,” says Andrew.  “This movement of households through our system ensures that households do not become dependent on Thandanani and that Thandanani itself is able to take on new households without creating an unsustainable demand on our capacity and resources.”

Thandanani has been working in the Msunduzi area since 1995. In 2016/7 the foundation will be working in six communities around Pietermaritzburg.

The foundation’s annual report abounds with heartening stories of lives turned around by seemingly small interventions.  For example, during a recent home visit, a Thandanani family strengthening facilitator identified a child who was not performing well at school.  “When she visited the school, teachers confirmed the fact that she was indeed struggling with her schoolwork,” Andrew relates. “In consultation with the school and the caregiver the child was then sent for a formal assessment with a psychologist at the department of education. The assessment revealed noticeable learning difficulties on the part of the child and, as a result, the child has been placed in a special needs school.”

Besides a healthcare problem Covid-19 is also a data issue and 5G technology, with its lightning speed, can help to curb its spread
Read more
Advertising
Continue to the category
Coronavirus