Towards a new hashtag unity 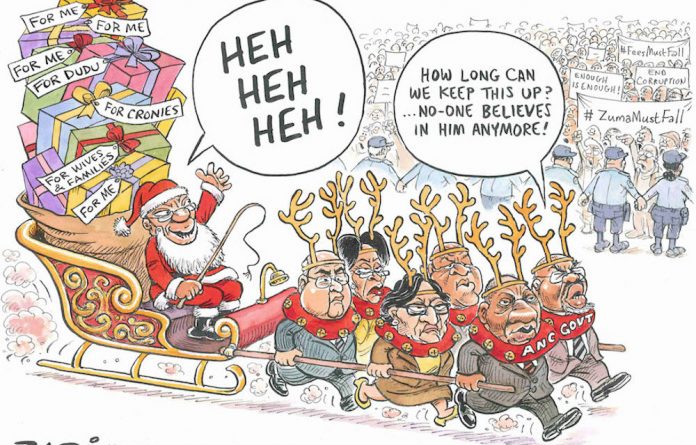 Before he became a politician, Yanis Varoufakis, Greece’s charismatic former finance minister, warned that Europe’s economic downfall “poses a threat to civilisation as we know it”. In an essay, he asked a question that is pertinent to the crossroads South Africa faces on the brink of 2016.

“If my prognosis is correct, and we are not facing just another cyclical slump soon to be overcome, the question that arises for radicals is this: Should we welcome this crisis of European capitalism as an opportunity to replace it with a better system? Or should we be so worried about it as to embark upon a campaign for stabilising European capitalism?” Varoufakis wrote.

For South Africans, the crisis we face is one of poor leadership that has been responsible for the economic beating we’ve taken. In a year filled with disruptions, unrest and the return of revolutionary catchphrases, South Africa is now on the cusp of something new – an era of emergence after a democracy-induced illusion that political freedom could bring social and economic equality. But if something does fall, will something better rise?

When President Jacob Zuma dismissed finance minister Nhlanhla Nene and then sacked minister-for-a-weekend Des van Rooyen, the person who was appointed to the position was Pravin Gordhan. Perhaps it was pressure from within the ANC that led to Zuma’s U-turn or maybe it was the panic among big banks and the white middle class, but the outrage that ripped through civil society can’t be ignored.

We’d be naive to believe the ANC statement that it was listening to the people when it made its decision, but we’d also be too self-deprecating if we failed to acknowledge the influence of civil society in exerting pressure through outrage – a trending hashtag like #ZumaMustFall has the world, including investors, watching. If citizens don’t trust their president, why should investors keep investing in an economy governed by a reckless leader?

Before #ZumaMustFall, the students played a catalytic role in the 2015 protests. #RhodesMustFall at the University of Cape Town led to the removal the statue of colonialist Cecil John Rhodes. In October students from the University of the Witwatersrand, under the banner #FeesMustFall, shut down the university to demand a halt to fee increases. Students across the country joined the campaign, spilling on to the streets in a national shutdown that led to outbursts of police brutality and eventually resulted in Zuma announcing a 0% increase for 2016.

The #FeesMustFall and #ZumaMustFall protests are vastly different from the housing and service delivery protests that post-apartheid South Africa has become accustomed to. For seemingly the first time in recent memory, white people took to the streets en masse to agitate for Zuma’s removal, but their marches were rejected by those who allege racism and by students who accuse them of misappropriating “Fallism”.

Decolonisation is at the heart of Fallism, with students demanding the fall of institutional racism, structural inequality and white monopoly capital, which continues to distribute more wealth to white people than the country’s black majority. The student politics are horizontally structured to include all voices. Intersectionality is what many of them strive for – a politics that denounces gender bias, misogyny and homophobia.

The #ZumaMustFall pickets were also horizontally structured but lacked the diversity of black voices, particularly in Cape Town where, yes, black, coloured and Indian people were present, but the overwhelming majority were white.

“We do hope that we can embrace more disparate communities in future events, as we will only bring about the change we want if everyone is involved,” Capetonian march organiser Kerry Nelson told the Mail & Guardian. She added that white people had finally joined protests in the country, because “people only rail against something when they feel how it affects them”.

“Whites, being predominantly middle class, felt the effects of the president’s most recent decisions more acutely than lower-income earners who have other pressing concerns,” Nelson said.

Would such a group be willing to support the decolonisation project – to protest for the fall of structures that have maintained their privilege? Do they understand how history has given them that privilege at the expense of black people?

In Johannesburg, photos of #ZumaMustFall demonstrators donning the old apartheid flag went viral, and in Cape Town a photo of a woman in a Nelson Mandela T-shirt doing a yoga pose caused some to question the seriousness of the protest. Eventually, she clarified that she was posing for a photoshoot.

It is obvious that there are divisions within the ranks of the emerging active citizenry. But now more than ever we have the opportunity to take some power back to grassroots activism.

The racism and privilege of some #ZumaMustFall demonstrators is not surprising, yet disappointing. With social media, we can confront and engage with these protesters because we are developing a new active citizenry. What will come of it depends on the divisions among protesters and the alliances that could be forged if people confront their own privilege. It’s a big ask, and one that has been ongoing for years. What also needs to be considered is how people in townships, who have protested far longer than some #FeesMustFall and #ZumaMustFall marchers, can have their voices heard with the attention attracted by the hashtag movements.

Ultimately, we need a unity among protesters that challenges the legacy of apartheid and our government’s role in maintaining inequality through prioritising their political power over the public interest. Success or failure to grow alliances is particularly powerful because our political left has shrunk. But whether that unity is realistic remains to be seen.

Varoufakis’s question still hangs in the air: If decolonisation succeeds or if Zuma does fall, what is the alternative – and will it be better than the current power system? Excitement may run in the streets at the footfalls of protesters, but strategy and attainable goals are crucial for results in activism.

For now, the hope is to see more people taking to the streets in 2016 and more critical engagement on the divisions among movements. Already, anticipation is in the air. What a time to be alive.