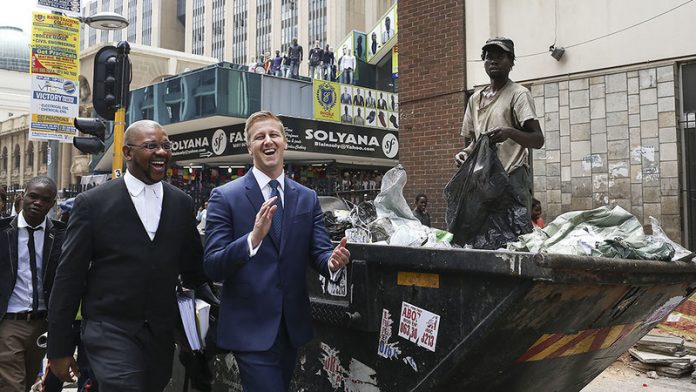 Do black lawyers have a moral, political or ethical obligation to black people? In other words, should they, in their practice, consider whether their conduct aids or harms black interests? This question has come to the fore as a result of the controversy around radio personality Gareth Cliff, which is before the high court.

We all know that Cliff was sacked by M-Net for defending Penny Sparrow’s “blacks are monkeys” comment. Cliff tweeted in the heat of the Sparrow saga that, basically, those who were up in arms didn’t understand the right to freedom of expression. In short, he argued that Sparrow has the freedom of expression to call black people monkeys. Under public pressure, M-Net moved on Cliff and axed him from the judging panel of Idols (South Africa). Cliff is now suing the channel for some R25?million.

In pursuit of the matter, Cliff hired himself the chairperson of the self-declared “anti-racist” Economic Freedom Fighters and vice-chairperson of the Johannesburg Bar Council, advocate Dali Mpofu. Intuitively, Cliff understood that his matter in the public eye was about racism; he therefore bought himself counsel with anti-racist credentials and who was associated with a party of anti-racism. This raises questions: Are black lawyers black first, or are they for their profession first? Can an anti-racist individual overcome the test of prejudice when defending someone who is accused of racism and is insisting on his right to be racist as his defence?

Cliff was convicted in the public court of anti-racism as a racist. The crime he is accused of is straightforward: if you say someone has the freedom of expression to call me a monkey, then you are nothing but a racist.

Mpofu got permission from his party to take the brief, but it tried to cover itself by declaring: “Gareth Cliff’s defence of Penny Sparrow’s racist remarks represents the worst form of racism.”

It is instructive to juxtapose this with Mpofu’s comment in court that “this was one of the worst forms of discrimination. Gareth Cliff was discriminated against because he is white.” Mpofu’s professional obligations, as it were, violate his political position. This raises the question: Why didn’t the EFF instruct its chairperson to decline the brief? Surely an anti-racist party can’t be seen to be abetting racism. What aggravates these contradictions is the fact that Cliff is a known serial racist offender.

There has been a misleading social media debate on whether the rules of the Bar and related policies compel advocates to take all briefs. The rules handbook of the Bar doesn’t seem to support this claim, because it makes provision for “special circumstances” exemptions. Furthermore, there is the convention that legal representation must be “without fear, favour or prejudice”. Here, surely, an anti-racist could argue that they couldn’t represent someone who insists on racism as their defence. An anti-racist is expected to be inherently prejudiced against racists.

Mpofu, as an anti-racist, could only take the case if he believed Cliff was not racist in supporting Sparrow, but this brings him in direct conflict with the public and the statements of his own party. Taking the brief meant he was going to deny that it is racist to call black people monkeys.

Luckily for him he doesn’t have to argue this point in court, but in the public court of anti-racism he still has to explain how defending a racist’s right to be racist is consistent with his own anti-racism stance. Mpofu has opened himself up to charges of bad faith and hypocrisy, and his party to charges of being lenient towards racism.

Mpofu’s defence strategy is to deny the racism of his client and instead accuse black Idols judges of racism. Hence his unsustainable claim that Cliff has experienced the worst form of racism. Mpofu turned the tables: the racist was the victim, now. Here, Cliff could be credited not so much for buying himself legal counsel as for buying himself political cover – and Mpofu was selling.

Legally, should the matter be decided in Cliff’s favour, it would mean his lawyers have contributed to developing jurisprudence that gives racists an alibi under the guise of exercising freedom of expression. It will be a victory for racism, not justice.

The silence of black lawyers on this saga is curious. Last October, when attorney Richard Spoor made a racist comment about the ability of black lawyers, black advocates, led by the same Mpofu, staged an unprecedented protest in the high court about discriminatory briefing patterns. Then, unlike now, Mpofu was livid about racism and didn’t grant Spoor his right to “offend” as he is now giving Cliff and, by extension, Sparrow.

Are black lawyers concerned by racism only if it affects their livelihoods and not as a social problem?

Worse, Mpofu’s line of defence is to deny Cliff’s blatant act of racism and to make light of it.

Another indefensible objection has been that all accused persons have right to legal counsel. But defending a racist to have the right to be racist is different from a case of murder, where the lawyer doesn’t assert the right of the murderer to kill.

Commitment to principle above profession (where it offends justice) is the staple diet of those who wish for change. We remember the young OR Tambo and Nelson Mandela using law to advance a course of justice at great personal risk.

Perhaps Argentinian romantic revolutionary Che Guevara was the most prominent of those who lived for principle. After qualifying as a medical doctor, he relinquished his profession to serve the revolution and today Cuba has one of the best healthcare systems on Earth. Steve Biko abandoned his medical studies for the cause of black liberation.

In the speech for which he was eventually murdered by a parcel bomb in 1974 in Botswana, Abraham Tiro, the student representative council president at Turfloop (now the University of Limpopo), asked fellow students: “Of what use will be your education [if it] is not linked with the entire continent of Africa?” He concluded: “It [is] meaningless.”

We don’t ask black lawyers to martyr themselves but when a matter is as clear as the Cliff case, they have to choose between supporting racism or refusing to be its agents.